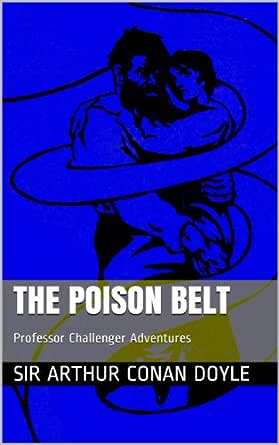 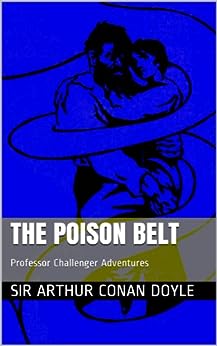 Professor Challenger, his wife, journalist Malone and adventurer Roxton have gathered with oxygen canisters to watch the final hours of the world. As a poisonous miasma apparently asphyxiates the human race, Malone feverishly writes his copy. More than just SF, this is Conan Doyle's post-First World War message of hope. Read with gusto. - Rachel Redford, The Observer In Doyle's short novel featuring Professor Challenger, the earth moves through a poisonous belt of the 'ether' - the stuff supposedly filling space - and the protagonists of the first Challenger novel, The Lost World, reunite to observe what seems to be the end of all life. ...Glen McCready ... supplies appropriate voices for the major characters, including the rumbling, bull-like Professor Challenger, his dainty wife, and the drawling Lord Roxton. Overall, McCready delivers the somewhat talky text with careful expressiveness, helping to bring it to life. - W.M. A(c) AudioFile 2009, Portland, Maine

The reader will find in this edition unique, dedicated, detailed, specific, hand-crafted additional content/annotations. The historical context included will provide the reader a detailed background on circumstances of creation of Doyle’s famous characters, the period and the author, Sir Arthur Conan Doyle.

In early 1891, Conan Doyle opened an ophthalmology practice in London. This wasn't a success (in his autobiography, Conan Doyle claims that he didn't have a single patient). However, his lack of patients did give him more time to concentrate on writing, and during this period he developed the approach that would catapult Holmes (and Conan Doyle) to international success.

Sherlock Holmes stories continue to entertain millions of readers across the world, even over hundred years after their creation. The reader is captivated by Sherlock Holmes and beautifully crafted stories that make them crave more.

In his later writing Conan Doyle also created one of the great anti-establishment heroes in Professor Challenger. Fiercely intelligent but also irascible, unpredictable and occasionally violent, Challenger is willing to challenge any scientific or cultural precept, however dearly held. Largely written during and after World War One, the Challenger novels poke fun at widely held beliefs and use the science fiction to examine and underline the strangeness and unpredictability of the world.

Following the success of ‘The Lost World’, less than year later the second novel to feature Professor Challenger appeared: ‘The Poison Belt’. However, this is a very different novel to the upbeat and exciting ‘Lost World’. It is more sombre novel and touches on significant questions of humanity and human life on the eve of the First World War.

‘The Poison Belt’ by Sir Arthur Conan Doyle is a fascinating reading dealing with important questions of life and death. Just plunge into the amazing adventure of Professor Challenger, and enjoy yourself along the way. But be warned, this novel is more sombre than ‘The Lost World’.

‘The Poison Belt’ was first published in 1913.
See all Product description
click to open popover

Russell May
3.0 out of 5 stars I give it a meh
29 July 2016 - Published on Amazon.com
Verified Purchase
This short story features Sir Doyle's Professor Challenger.

Sir Doyle's mastery of the English language is in full force. The ripostes between Challenger and Summerlee are almost worth the price of reading the book.

Alas, unlike the The Lost World, I have to say this book is barely worth the read. The biggest problem is Sir Doyle sets up the story very well and then doesn't seem to know what to do with it.

It's a setup for what could be a great post-apocalyptic world of almost unthinkable horrors. But Sir Doyle flinches.

The ending is weak. Oh, it's clear Sir Doyle was aiming for a teaching moment about humanity needing to mature and not take everything for granted and so forth, but despite his normal way of handling plot and pacing, he hamfists the whole thing to something rather drab.

There's no adventure. It's passive. They hide out in a sealed room to keep the oxygen in. They go outside and record a horrifying end to humanity. And then Sir Doyle does an almost bait-and-switch with the ending so we all may learn An Important Lesson About Life.

Read it if you are trying to read everything by Sir Doyle. His use of English shouldn't be missed, but you can find his writing in much better books by him.

It's just better than a two, but hardly worth a three. Rounding up, I give it a meh.

docbob
3.0 out of 5 stars Definitely not Sherlock Holmes.
13 January 2018 - Published on Amazon.com
Verified Purchase
I was so keen on reading this book that I got through Bookshout. I loved Arthur Conan Doyle's Sherlock Holmes but this book was nothing like the fine crafted Holmes stories. Much of it did not seem to make sense at all.

Basic story is a scientist has discovered something in the air after a comet has flown by. It seems to be more prevalent in the southern hemisphere but is spreading northward. He finds this not by examining the air but in the way that people are getting more irrational as time goes by. It is not something that can be registered with equipment, but only by logic. He quickly gets friends to join them and urges each to bring him an oxygen tank. One of these friends is a reporter and it is from his eyes that we are reading this. They seal up a room and as the 'poison belt' of air gets close to them they go into the room and seal themselves in and use the oxygen to make it through.

I guess I expect more logic to stories from Doyle. While I can take in the dated references to the time and handle them, the logic of all of this seems wanting. I could not suspend my belief that it was happening. One part was, I was reading what the reporter had written after everyone had died off. So you kind of know they did not all die.

While an interesting read it is not one that I would highly recommend. If you like the time frame it might be something to look at.

Jerseygirl
3.0 out of 5 stars The Poison Belt
20 July 2013 - Published on Amazon.com
Verified Purchase
Professor Challenger and his adventurous friends are together again, this time confined to a room in Challenger's home while trying to escape the poisonous cloud the earth has encountered. As every living entity on earth is killed the friends must deal with the fact that they are likely to be the only survivors, due to the fact that the professor seems to have been the only person to have detected the cloud and prepared for it.
There is little action here. Being confined as they are the group can only surmise what is happening outside their field of vision.
The story revolves around their reactions to what they know is happening and what their futures will hold.
Although there's not much action or excitement here, it's an interesting concept. Doyle is, as always, a more than competent author. Altogether I would say it's worth the short amount of time it takes to read this novel.
Read more
4 people found this helpful

JustJoyFL
5.0 out of 5 stars Importance of life
29 November 2019 - Published on Amazon.com
Verified Purchase
I could write much about philosophy that I appreciate in this old book. The key part is humility. No matter how we live in lifetime, death is the great equalizer. Death reduces both rich and poor to the same size grave or cremation jar. I feel that science and religion are proof that a Creator exist. I see a loving Creator of God and Goddess in the last chapter. If only a sudden spiritual awakening could save our dying modern world, I would be full of gratitude on Thanksgiving.
Read more
Go to Amazon.com to see all 40 reviews 3.3 out of 5 stars
Get FREE delivery with Amazon Prime
Prime members enjoy FREE Delivery and exclusive access to movies, TV shows, music, Kindle e-books, Twitch Prime, and more.
> Get Started
Back to top
Get to Know Us
Make Money with Us
Let Us Help You
And don't forget:
© 1996-2020, Amazon.com, Inc. or its affiliates