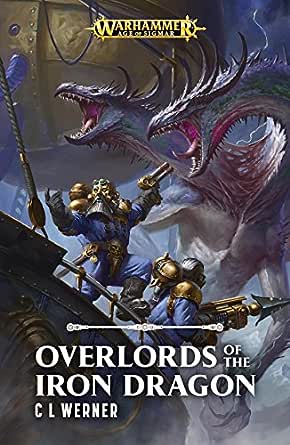 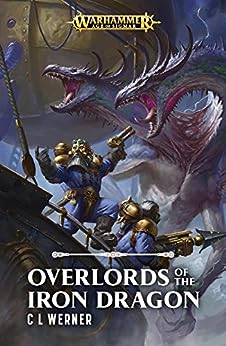 Far above the highest mountain peaks, a new power has arisen. The duardin have developed new technology and weapons of war, and now they sail the skies in their amazing airships, seeking wealth and plunder. Brokrin Ullissonn, Captain of the Ang Drak, has a reputation for bad luck. Unless his fortune turns, and soon, he will lose his ship and his livelihood. When he and his crew discover the location of a source of aether-gold of unparalleled quality, the temptation is too strong to resist. No matter what dangers present themselves, the duardin desire wealth beyond all. But when Brokrinn realises what the true cost of the aether-gold will be, is it too late for him to save himself, his crew, and his ship?

Read it Because
It's the Kharadron Overlords' first starring role in a Black Library novel, and it's as packed with high-skies action, excitement and danger as a sky-ship's hold is with aether-gold!

C L Werner has written over twenty novels and even more short stories set in the Warhammer fantasy world, including the End Times novel Deathblade, the Witch Hunter and Brunner the Bounty Hunter trilogies, the Thanquol & Boneripper series, and The Black Plague trilogy. He has also written a number of stories set in Warhammer’s new Age of Sigmar setting, including the Realmgate Wars novel Lord of Undeath. His Warhammer 40,000 credits include the Space Marine Battles novel The Siege of Castellax, the audio drama Iron Devil and the novel Cult of the Warmason. He lives and works in the American south-west.
click to open popover

Gbupp
5.0 out of 5 stars Very fun story!
22 October 2018 - Published on Amazon.com
Verified Purchase
Did a great job of capture the Kharadron Overlords and was interesting to the end.
Read more
2 people found this helpful

Brennan
5.0 out of 5 stars What a ride!
10 December 2019 - Published on Amazon.com
Verified Purchase
A great adventure alongside a Kharadron crew! Plentiful references to tabletop figures and a couple factions, with an extra fun surprise or two!
Read more

Amazon Customer
5.0 out of 5 stars Excellent Adventure Novel!
12 August 2019 - Published on Amazon.com
Verified Purchase
I really hope there's more Kharadron Overlords books in the future!
Read more
Go to Amazon.com to see all 3 reviews 5.0 out of 5 stars
Get FREE delivery with Amazon Prime
Prime members enjoy FREE Delivery and exclusive access to movies, TV shows, music, Kindle e-books, Twitch Prime, and more.
> Get Started
Back to top
Get to Know Us
Make Money with Us
Let Us Help You
And don't forget:
© 1996-2020, Amazon.com, Inc. or its affiliates