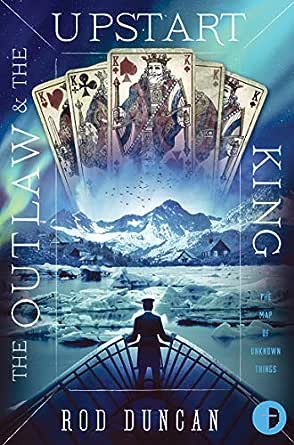 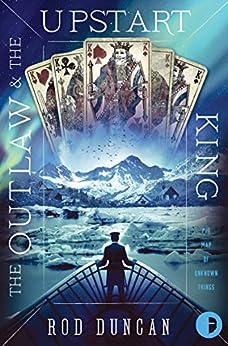 Rod Duncan writes alternate history, fantasy and contemporary crime. His novels have been shortlisted for the Philip K. Dick Award, the East Midlands Book Award and the John Creasey Dagger of the Crime Writers' Association. A dyslexic with a background in scientific research, he now lectures in creative writing at DeMontfort University.

Some might say that he is obsessed with boundary markers, naive 18th Century gravestones and forming friendships with crows. But he says he is interested in the way things change.

Praise for the Map of Unknown Things

"I absolutely loved The Queen of All Crows. It's a gripping alternative history adventure set in an intriguing world. Among the fast-paced plot twists the novel also provides keen insights into power structures, particularly when it comes to gender roles as social constructs. Elizabeth Barnabus is possibly my favourite steampunk main character ever: resourceful, fearless, unusually observant and emotionally intelligent. I was thrilled to follow her to the ends of the world as a reader."
- Emmi Itäranta, award-winning author of Memory of Water

"The Queen of all Crows is a smart and entertaining read, among the best of the steampunk subgenre I've read. It continues the story of Elizabeth Barnabus in an alternative history where they take intellectual property protection a little too seriously."
- Craig Newmark, founder of Craigslist and Craigconnects

"Let's get this out of the way: The Queen of All Crows is an excellent book, full stop. Duncan has managed to infuse the world of the Gas-Lit Empire, and the character of Elizabeth Barnabus herself, with a new jolt of life, color, and depth. Clear your schedule, because you won't want to stop reading this until you've finished, and then you'll want more."
- Eric Scott Fischl, author of The Trials of Solomon Parker

"Some authors really find a groove in their series where each new book is more enjoyable than the last. But Rod Duncan has done even better with The Queen Of All Crows he's taken the Gas Lit Empire series into a completely new direction that is both wonderful and wondrous."
- Surreal Tavi

The Fall of the Gas-Lit Empire

"Elizabeth Barnabus is a uniquely intriguing character who will take readers on a fascinating journey through the strange landscapes of the Gas Lit Empire. Rod Duncan's storytelling skill brings his fictional world to a mysterious, vibrant life."
- Stephen Booth, bestselling author of the Cooper & Fry series

"Rod Duncan's The Bullet Catcher's Daughter is a magic box pulsating with energy. Compulsive reading from the get-go, the blend of steampunk alternate history wrapped in the enigma of a chase makes for first-rate entertainment in this finely crafted novel."
- Graham Joyce, author of Year of the Ladybird

"Steeped in illusion and grounded in an alternative history of the Luddite Rebellion, Duncan's strong supernatural mystery serves ably as both a standalone adventure and the start to a series...Strategically placed steampunk tropes inform but do not overwhelm Elizabeth's headlong quest to find a missing aristocrat sought by the Patent Office, which is fixated on both achieving perfection and eliminating "unseemly science." A hazardous border crossing into the permissively corrupt Kingdom of England and Southern Wales provides ample excitement, and a glossary at the novel's conclusion hints enticingly at a much more involved story to come."
- Publishers Weekly

ashley armstrong
5.0 out of 5 stars Exceptional.
Reviewed in the United Kingdom on 21 February 2019
Verified Purchase
An extraordinary tale, powerfully and convincingly told by a writer and world-builder who gets better with each volume! Welcome Elizabeth Barnabus, and Tinker and Julia, who've grown as characters along with the novels. This is the fifth installment, the second novel in the trilogy The Map of Unknown Things, which follows on from The Queen of all Crows, and the three previous books that make up The Fall of the Gas-Lit Empire.
Set in a wonderfully-realised alternative vision of Newfoundland, a landscape that is as hard and unforgiving as the feudal clans that populate it, shock follows surprise as the story unfolds to its conclusion.
If you haven't yet encountered these stories, you have much reading pleasure ahead of you, and with more to come!
I can't wait for the next one!

Amazon Customer
5.0 out of 5 stars New direction begun in ‘Queen Of All Crows’ continues
Reviewed in the United Kingdom on 19 January 2019
Verified Purchase
Welcome back Elizabeth - we’ve missed you! This resourceful alter-history steam-punk heroine(/hero) is put through the wringer again, but I’m sure Rod Duncan knows we wouldn’t expect anything else. The last Duncan book ‘The Queen of All Crows’ saw Elizabeth escaping actual pirates in a flimsy craft with a ‘family’ she’s collected through the sequence. This book continues as they wash up on a strange shore.

Briefly, the first trilogy in the ‘Fall of the Gas-Lit Empire’ sequence introduces us to Elizabeth Barnabus and the challenges of living within the union of countries known as The Gas-Lit Empire. With this book, and it’s immediate predecessor ‘Queen of All Crows’ we see Elizabeth try to survive the wider world outside the Gas-Lit alliance, attempting to save her family from probable doom, whilst uncovering information that has world-changing significance (I’m trying not to make spoilers!).

‘The Outlaw and the Upstart King’ may be Duncan’s harshest world yet. As we move through a culture that prides itself on hierarchical violence, maiming and tattoo-branding, we of course meet new characters, in particular Elias. He’s a great read - sexy, talented, almost broken by life: initially a foil for Elizabeth, but possibly more of a mirror.

Duncan’s writing style has always been consistently fluent and detailed. In the earliest books I wondered if I really got the heart of the characters, but this is not the case now - certainly the main characters are memorable; flawed and appealing, they sit with you after you put the book down.

If you’ve enjoyed the previous books, you’ll know Duncan’s strength is his precise, descriptive language. It contributes so much to the story - Elizabeth (and now also Elias) is able to survive in part due to her sharp observational skills and her ‘sleight of hand’. The descriptions in the book allow you to feel what it’s like to see the world with clarity, and then act with nuance.

It’s a cliche, but once I started I didn’t want to stop, and now feel a little bereft now I’ve finished. I may revisit Elizabeth while waiting for the next instalment - possibly even starting at the beginnng with the Bullet-Catcher ‘s Daughter’. If you haven’t yet, I suggest you do too.

Clare Littleford
5.0 out of 5 stars Inventive and engaging series - love it!
Reviewed in the United Kingdom on 20 March 2019
Verified Purchase
I've read all of the books in the Fall of the Gas-Lit Empire series, and I love how inventive the whole series is. Each book has a strong story and fantastic characters. The Map of Unknown Things series takes us outside the main Gas-Lit Empire to other parts of the world that the author has created. I love that these are great adventure stories, but also have a more thoughtful side to them - the worlds we visit are all very different and flawed in very different ways, but inhabited by people who have been shaped by the nature of those worlds. It's very clever, but also very engaging - I find myself completely drawn in, unable to predict what will happen next. I also have a strong sense that there is an overall plan to the whole series - this is building into a fantastic overall tale. Really looking forward to the next instalment!
Read more
One person found this helpful
Report abuse

Amazon Customer
5.0 out of 5 stars Deliciously dark, dangerously good.
Reviewed in the United Kingdom on 31 March 2019
Verified Purchase
The fifth book in this overall series of Steampunk novels - the second of the new trilogy.
Wow.
The narrative opens with Elias, a flawed and complex protagonist who we still, thanks to the author's compassion, deeply connect with. When Elisabeth Barnabus finally appears we feel we can relax, although we do so at our peril: The Outlaw and The Upstart King is a much darker narrative than any you've read before from Rod Duncan.
The themes you'd expect to be there are: gender politics, class wars, the dark and violent machinations of political power games, forgiveness and revenge, all wrapped up in a heart-stopping, page-turning, rumbustious roller-coaster of a read. And it's set in Newfoundland. What's not to love?
Read it - It's fab!

nick R
5.0 out of 5 stars Really Good
Reviewed in the United Kingdom on 15 August 2019
Verified Purchase
I keep reading Rod Duncan’s novels and they just get better and better. This one takes the series off in another direction I was hooked and still am. Can’t wait for the next one!
Read more
One person found this helpful
Report abuse
See all reviews
Get FREE delivery with Amazon Prime
Prime members enjoy FREE Delivery and exclusive access to movies, TV shows, music, Kindle e-books, Twitch Prime, and more.
> Get Started
Back to top
Get to Know Us
Make Money with Us
Let Us Help You
And don't forget:
© 1996-2020, Amazon.com, Inc. or its affiliates