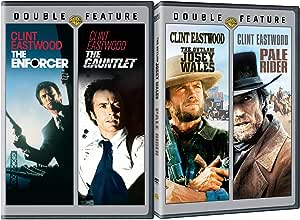 4 MovieClint Eastwood Pack DVD - Action Western Set Outlaw Josey Wales, The/Pale Rider (2pk) As The Outlaw Josey Wales, four-time Academy Award winner* Clint Eastwood is ideally cast as a hard-hitting, fast-drawing loner, recalling his "Man with No Name" from his European Westerns. But unlike that other mythic outlaw, Josey Wales has a name - and a heart. After avenging his family's brutal murder, Wales is on the lam, pursued by a pack of killers. He travels alone, but a ragtag group of outcasts is drawn to him - and Wales can't leave his motley surrogate family unprotected. Eastwood's skills behind and in front of the camera connected with audiences for its humor and tenderness as well as its hair-trigger action.PALE RIDER -When property owner Coy LaHood starts using a band of hooligans to terrorize a group of small-town gold miners into giving up their territory, an enigmatic man named "Preacher" arrives in town. Preacher fends off the attacks, and then goes directly to LaHood to negotiate. When the miners, led by Hull Barret, refuse the terms, LaHood sends in Marshall Stockburn to take down Preacher and the others.Enforcer, The /Gauntlet, DVD THE ENFORCER When terrorists rob an arms warehouse and go on a bloody extortion spree, city leaders seek out Callahan, who's now teamed with a lady partner (Tyne Daly) with two jobs: tracking down the terrorists - and winning Harry's confidence. THE GAUNTLET Clint Eastwood runs The Gauntlet into an explosive movie embodying its title with a vengeance. The witness is a hardened hooker (Sondra Locke) whom everyone - including Vegas oddsmakers - wants dead. Trapped between both sides of the law, the two must survive an obstacle course of raging gunfire, blazing cars, swooping helicopters, murderous ambushes, crazed bikers and crooked police. Building to a ferocious finale that shoots an armored bus to smithereens with more than 8,000 bullets, The Gauntlet is a trip you can't miss.