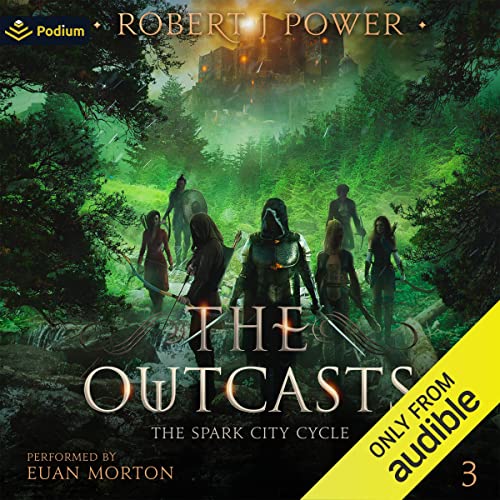 They don’t fight for Spark City anymore. But they fight. They are The Outcasts.

Hiding in The Wastes, Erroh and his band of exiles must find a way to defend a city that they can never return to. But with Magnus adrift, his warriors decimated, all appears lost as Uden begins his march.

A world away, the deadly assassin, Aurora, is hunting down the man who stole her god’s eye.

Meanwhile, Spark City’s fall has already begun from within its own walls. As war bears down on them all, The Outcasts are running out of time and options. Can they survive long enough to stop Uden’s war before it burns them all, or will this be their final battle?

Amazon Customer
5.0 out of 5 stars What a ride!! When is the next book coming?
Reviewed in Australia on 11 September 2021
Verified Purchase
Another fantastic instalment in this series. If you loved the first two like I did, you’re going to love this one too. More action and mayhem and disaster as only Rob Power does it. This is such a fun read. Can’t wait for the final instalment!!
Read more
Helpful
Report abuse
See all reviews

Glen Davis
4.0 out of 5 stars A bit uneven but mostly enjoyable
Reviewed in the United Kingdom on 4 November 2021
Verified Purchase
So there's the alphaline elite class of privileged skilled warriors who can really kick ass. Yet when two of them are out on a scouting mission to track the movements of a massive enemy force they decide to get stoned and act like they're out on a fun ride. Or how about the idea that given a report that this enemy know where your secret hideout is located they don't take the obvious step of moving camp they unbelievably leave the gates unguarded and wide open for the enemy to stroll through. There's similar swings in characters too where they go from almost invincible to scared unsure pups prone to acts of stupidity. With the post apocalyptic vibe and the odd bit of old tech popping up I shouldn't like this much but I actually do which is something of a surprise to me.
Read more
One person found this helpful
Report abuse

adbrad
5.0 out of 5 stars Amazing!
Reviewed in the United Kingdom on 9 September 2021
Verified Purchase
I was lucky enough to receive an advance copy of this brilliant book! It has been great to read more about Erroh and Lea the dream team of alphas. Robert has a brilliant way of building characters that makes them relatable and gets you hooked on their stories. To the point where you want to rush through the next chapter to get back to one of your favourites, but then that chapter is so good you are hooked on a new characters story. A must read, that has an abundance of dark humour, wit and twists and turns. You won't be able to put it down!
Read more
One person found this helpful
Report abuse

Amazon Customer
3.0 out of 5 stars Disappointing ..... and surprisingly boring!
Reviewed in the United Kingdom on 25 September 2021
Verified Purchase
I loved the first two books and re-read the second so that I was prepared for this one. Sadly, I was very disappointed. So much of the book was taken up by descriptions of what is going on in their heads - again, and again, and again..... I found the description of Aurora's mindset particularly boring and tended to skip whole passages as she was yet again describing "bathing in blood". I felt rather cheated as I felt the author was using these repetitive descriptions as a way of "padding out" the book, rather than getting on with some action. We finally got some but all, in all, underwhelming.
Read more
One person found this helpful
Report abuse

L. Ellerton
5.0 out of 5 stars fantastic continuation of a gripping story
Reviewed in the United Kingdom on 12 September 2021
Verified Purchase
We’ve waited to see how Erroh and his band of misfits would face the next phase of Uden’s aggression, and fans of Robert J Power will find their patience well rewarded.

The characters continue to develop and acquire more dimensions, and here we see many of the alpha line females from the first book take on more depth. What’s so refreshing about the Spark City cycle is that no-one is without flaws: every single character brings something new to the party.
Read more
Report abuse

Catherine
5.0 out of 5 stars Loved it.
Reviewed in the United Kingdom on 6 January 2022
Verified Purchase
I starting reading this thinking it was the last one!! Silly me. All the way through I kept thinking it couldn’t end like this.... I love this series. So in love with the characters. Love the writing style. Love the detail to everything. It’s sweet yet brutal. Charming yet graphically hideous. Can’t wait for the next one.
Read more
Report abuse
See all reviews
Back to top
Get to Know Us
Make Money with Us
Let Us Help You
And don't forget:
© 1996-2022, Amazon.com, Inc. or its affiliates