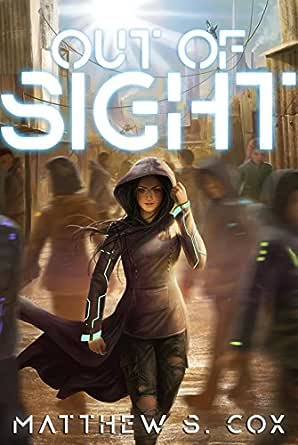 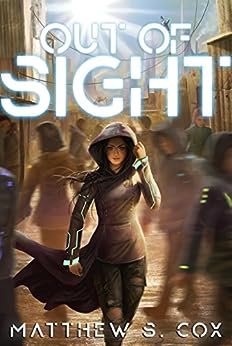 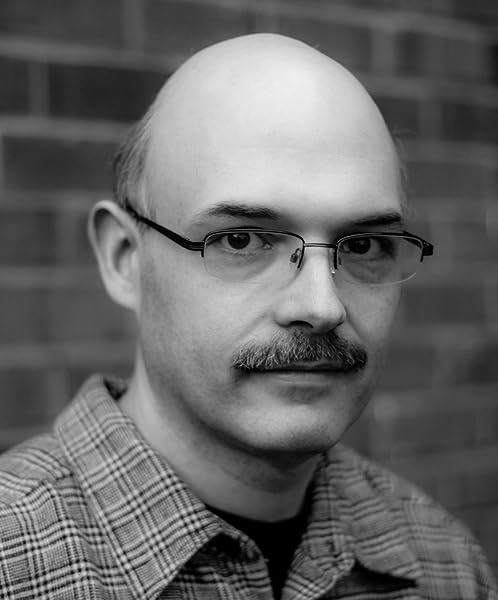 Amazon Customer
5.0 out of 5 stars On Matthew S. Cox’s Out of Sight: Book 1 the Progenitor Series
Reviewed in the United States on 16 August 2018
Verified Purchase
Out of Sight: Book 1 of the Progenitor series starts by showing the reader a new level of apocalyptic hell, especially for orphans and runaways to endure. Sima Nuvari, a 16 year old runaway, has lived by her wiles and street smarts in the filthy and overcrowded streets of Earth City, even sleeping in any hole in the ground or wherever with other Outcasts just to rest. She sees and deals with pedophiles, drug users, gangbangers, and corrupt police yet keeps a morality that is surprising yet believable.

War had destroyed most of Earth’s cities and population. Sima, a runaway, lives by begging glints (money) from Citizens in Earth City. Glint isn’t too hard to beg, but little kid beggars take revenues away from Sima, thus making her really dislike them. She even stuffs one into a trash container so Sima can beg in peace. Since she is considered an Outcast (orphan), she only has the right to die and is at the mercy of vicious gangs and the security force, neither of which cares if she lives or dies and is brutal to her and all Outcasts.

Sima is given a chance at a new life after trumped up charges against her for theft will be expunged if she will go to another planet to help colonize it. Sima will also be given a real family, education, and a future. An accident in orbit above the new planet Mirage occurs, and Sima is forced into contact with a little girl and two younger males.

Not to give too much away, I will say that through her strength, ethics, honesty, and love, Sima is able to save herself and the three younger kids in an off-planet adventure as they come to grips with a spacecraft ejection, alien monsters, fear, and deprivation. Sima’s maternal extinct awaken and she is transformed even into loving some little kids whom she would have intensely disliked back on Earth. She comes to some nice conclusions which Cox provides believable transforming events.

Cox weaves a tale as only he can into a really fun book. Cox’s decency, morality, and love of humanity come across and breathe life into the characters, imbuing them with feelings and even some belly laughs readers should enjoy. I strongly recommend this book for teens and adults alike who enjoy an action-packed and detailed account of a life made better through the epiphany that only self-realization can give.

H. Bala
4.0 out of 5 stars "Night Scratch is a bad kitty."
Reviewed in the United States on 15 September 2019
Verified Purchase
Maybe, someday, a Matthew S. Cox book will disappoint, and that's when I'll do a double take on the author's name on the book just to make sure I hadn't picked up something written by, say, Matthew C. Sox. Matthew C. Sox is probably a crap writer.

Out of Sight is Cox's first book in his Progenitor series, except I hadn't seen hide nor hair of a sequel, so maybe it's a stand-alone work after all. If it is, I'm okay with it because the way it ends does wrap things up nicely. I'd still go for a sequel.

In some future, dystopian-wrecked version of Earth, Sima Nuvari is not living her best life. Having ran away from home four years ago, Sima has barely eked out an existence as an Outcast begging on the street. Sima is sixteen now and finding it harder and harder to look young and waifish and pathetic. She's resorted to strapping her bosom tight and hunching down a few inches in a try at looking younger. Maybe you can't blame her resentment against them younger anklebiters with the wide eyes who she feels are steadily taking glint (or money) from her.

In Sima's world, the divide between the haves and have-nots are pronounced like a m0therfudger. If you're an Outcast, you're despised by the Citizens and by the EGSF (Earth Government Security Force). If you're an Outcast, and if you're a girl with no skills and a sixth grade education like Sima, you're left with sketchy choices: join a brothel, take up a life of crime, or fall in with the underground separatists. Oh, wait, there's one more option. Sima can volunteer to go on a starship to colonize a distant planet where she's promised citizenship and adoption. Sounds too good to be true? Sima thinks so.

It took me a minute to get wrapped up in this book, but once I got hooked I couldn't stop reading. One of Matthew Cox's specialties is writing children so well. Sima isn't depicted as a perfect "I solve everything" heroine. She clearly has flaws. She puts her survival first and foremost (as would I); that's what a sh-- homelife and four harrowing years surviving on the streets will do ya. But, yes, there comes a point in which Sima is faced with either putting herself first or accepting responsibility for three young children in need.

So, there are other books by this author that I like better, like the Vampire Innocent books or the Evergreen series. But this one's good, too. Read this book if you're into congested dystopian societies, disadvantaged youths triumphing against all odds, three-story-tall, googly-eyed flamingos, and possibly the most adorable 6-year-old girl since the last adorable 6-year-old girl in any of this author's stories. There is also a bracelet that ends up with some of the best lines in this book, and maybe the best pep talk ever given to Sima: "You also possess the axe and the adoration of three children."

As I'd mentioned, if this book were a one-off, at least it ended things proper. But I hope for a sequel. I wouldn't mind seeing more of Sima and her three kids, and that bracelet with its wry commentary, and whatever happened to Cassie, Sima's almost-friend?
Read more
One person found this helpful
Report abuse

Cal
5.0 out of 5 stars Wonderful
Reviewed in the United States on 17 August 2018
Verified Purchase
A " cannot put it down" type book. A 16 year old girl goes from being a homeless waif living in the streets, to a castaway on a remote planet, to a surrogate mom for 3 other children, to being an adopted daughter. A wonderful journey
Read more
One person found this helpful
Report abuse

MrsStephanie81
5.0 out of 5 stars Please write more
Reviewed in the United States on 8 November 2019
Verified Purchase
I already miss the characters. lease tell me there will be more! Lissa was my favorite so sweet! I was on the edge of my seat reading about their adventures out of the life boat! Brave & strong leadership by Sima! Another great book!
Read more
Report abuse
See all reviews
Get FREE delivery with Amazon Prime
Prime members enjoy FREE Delivery and exclusive access to movies, TV shows, music, Kindle e-books, Twitch Prime, and more.
> Get Started
Back to top
Get to Know Us
Make Money with Us
Let Us Help You
And don't forget:
© 1996-2020, Amazon.com, Inc. or its affiliates