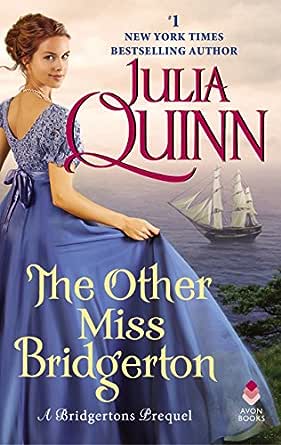 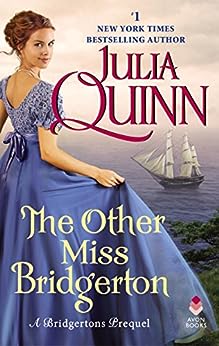 Julia Quinn started writing her first book one month after finishing college and has been tapping away at her keyboard ever since. The New York Times bestselling author of sixteen novels for Avon Books, she is a graduate of Harvard and Radcliffe Colleges and lives with her family in the Pacific Northwest. --This text refers to an alternate kindle_edition edition.

Fiercely independent and adventurous, Poppy Bridgerton will only wed a suitor whose keen intellect and interests match her own. Sadly, her London season offered no prospects. Now visiting the Dorset coast, Poppy is thrilled to discover a smugglers' hideaway tucked inside a cave. But her delight turns to dismay when two pirates kidnap her and stow her, bound and gagged, on the ship captain's bed . . .

Known as a reckless privateer, Captain Andrew James Rokesby is actually an agent of the British government. Setting sail on a time-sensitive voyage to Portugal, he's stunned to find a woman in his cabin--a Bridgerton, no less. He knows he may have to wed her to avert a scandal--though Poppy has no idea he is the son of an earl and neighbor to her aristocratic cousins in Kent. On the high seas, their war of words soon gives way to intoxicating passion. But when Andrew's secret is revealed, will his declaration of love be enough to capture her heart . . . ?

#1 NYT bestselling author Julia Quinn returns to the world of the Bridgertons with the third novel in her latest series --This text refers to an alternate kindle_edition edition.

Quinn's superlative third prequel to her Bridgerton Regency series introduces one of her most delightful couples yet . . . this is a real treat for Quinn's fans and anyone who loves historical romance, Publishers Weekly

a witty, tender story, full of nuance and romance. Quinn excels in writing stories full of joy and delight, where laughter trembles on the edges. If you're a fan of Quinn's Bridgerton series, this book has its signature charm, Happy Ever After

Quinn is a master of historical romance . . . Quinn makes even the most chaste passages smolder, the chemistry and romantic tension crackling off the page, Entertainment Weekly

Introduces one of her most delightful couples yet . . . This is a real treat for Quinn's fans and anyone who loves historical romance, Publishers Weekly

An adventure on the high seas full of wit, charm and smoldering attraction, The Other Miss Bridgerton captivated me right away . . . an unputdownable story that I think romance fans will treasure, Harlequin Junkie

This book was an utter delight . . . I just loved it, Love in a time of Feminism

Quinn's mastery of banter, character development, and the slow build of romantic and sexual tension is on full display in the newest Rokesby title (a series of 18th-century prequels to the Bridgerton Regency romances). Mentions of puzzles and architecture add interesting texture to an already compelling story. Delightful and charming, Kirkus Reviews (starred review) --This text refers to an alternate kindle_edition edition.
Read more

4.6 out of 5 stars
4.6 out of 5
1,633 global ratings
How are ratings calculated?
To calculate the overall star rating and percentage breakdown by star, we don’t use a simple average. Instead, our system considers things like how recent a review is and if the reviewer bought the item on Amazon. It also analyses reviews to verify trustworthiness.

jess
4.0 out of 5 stars The high seas historical with wit
Reviewed in Australia on 30 January 2021
Verified Purchase
This is second book I’ve read by this author, I love her highlander series from my first read. I really enjoyed the chemistry between poppy and Andrew, it was witty funny and had me laughing throughout the entire read. Towards end we get to the smutty but that was a little lack lustre for my taste terms of being heavily descriptive.

The story is predictable of how these two end together. It was characters witty humour
That is star attraction for this book that made me enjoy it so much!
Read more
Helpful
Report abuse

Kindle Customer
5.0 out of 5 stars Amazing
Reviewed in Australia on 24 November 2020
Verified Purchase
Another brilliant read from one of my favorite Authors. Julia's stories just keep getting better and better, highly recommended for everyone
Read more
Helpful
Report abuse

Kindle Customer
5.0 out of 5 stars I loved this book
Reviewed in Australia on 2 February 2021
Verified Purchase
I loved this story of George Rokesbys and Poppy Bridgerton. I loved their journey to them finding their happy ever after.
Read more
Helpful
Report abuse
See all reviews

Randal
4.0 out of 5 stars Quinn is always worth reading
Reviewed in the United Kingdom on 30 November 2018
Verified Purchase
A light and fluffy historical romance in which Poppy Bridgerton meets Andrew Rokesby. These are members of families in Ms. Quinn's long series of books, each dealing with one family member finding true love in spite of all difficulties. In this case the relationship doesn't start well when Andrew kidnaps Poppy and carries her off on a sea voyage to Portugal. There are reasons, of course, and it will be no surprise to tell you that it all turns out right in the end… but there are a few twists while love grows. Yes, OK, you tend to know what you're going to get with historical romance, but Ms. Quinn is adept at witty dialogue and she handles the passion well. My only slight quibble with this is the use of contemporary swearing. (I have no problem with cussing, but some of the turns of phrase were distinctly un-historical, which dragged me out of the story briefly.) Also, unusually for Ms. Quinn, there's an interesting chunk of story glossed over a bit too quickly at the end.
Read more
2 people found this helpful
Report abuse

Stacey I
4.0 out of 5 stars A sweet, gentle romance that takes a dramatic turn towards the end.
Reviewed in the United Kingdom on 3 January 2021
Verified Purchase
The Other Miss Bridgerton is the third book in the Rokesby series, which in itself is a prequel to the Bridgerton series which has recently been made into a Netflix series.

Poppy Bridgerton, bored with society life, gets a little more adventure than she expected when she stumbles across a smuggler's cove and is kidnapped by pirates. Luckily for Poppy (but maybe slightly disappointingly for readers like me), these are nice pirates, led by Captain Andrew James, who treat Poppy generally respectfully, even while they are holding her captive. There is more to Captain James than meets the eye, and he does not reveal his full identity to Poppy, for reasons frankly known only to Andrew.

Captain Andrew is a nice hero, on the whole gentlemanly with just a hint of a rogue. He assumes for most of the book that he will have to marry Poppy for propriety's sake, so you really don't feel that her reputation is ever in too much risk. Poppy is a fun heroine, who has good banter with Andrew.

This books started off very gentle and pleasant, and I thought it was going to be a simple, sweet romance until about halfway though when the plot takes a sudden dramatic turn halfway through, much to my delight. Suddenly the characters are thrown into peril and danger and I found it much more exciting.

The end, once it arrived, wrapped up very quickly. As the story is told mainly from Poppy's POV, some of the action takes place off the page and Andrew's identity reveal is dealt with very quickly. I maybe would have liked just a little more from them before the got their HEA.

I thoroughly enjoyed The Other Miss Bridgerton and while it may not be my favourite Julia Quinn novel, it is definitely one I will enjoy again. I'm also looking forward to reading the fourth and final book in the series, First Comes Scandal.
Read more
One person found this helpful
Report abuse

Kathryn Revell
5.0 out of 5 stars Andrew Rokesby's Book
Reviewed in the United Kingdom on 22 November 2018
Verified Purchase
Having met older brothers George and Edward in the first two books, we now get to enjoy seeing the witty third brother Andrew matched, in his case to the equally witty Poppy. Plenty of verbal sparring ensues when Andrew feels compelled to kidnap the female found poking about in his secret cave used to hide his brandy and secret government letters. She spends the whole boring journey to Portugal shut in his cabin, not knowing he's highly eligible. He knows the whole time there's a real risk he'll have to marry her, but by the time they arrive in Lisbon, that's not the awful prospect it seemed when he first met her. Sparkling!
Read more
One person found this helpful
Report abuse

emz200
5.0 out of 5 stars Brilliant read
Reviewed in the United Kingdom on 2 December 2018
Verified Purchase
I was excited for this next book. I was not let down! This was brilliantly written. The talent of Julia quinn is radiated throughout this novel. The fact she made 2 characters interesting enough to keep the story afloat on their own was amazing. Apart from the odd extra it was Andrew and poppy through the most of it. Very witty and clever. I would recommend reading the forst 2 of the trilogy as many references to family members would be easier to follow. Loved it!!
Read more
2 people found this helpful
Report abuse

Stephanie
5.0 out of 5 stars Lovely story
Reviewed in the United Kingdom on 3 December 2018
Verified Purchase
I seem to have waited ages for this book but it was well worth the wait. I absolutely loved it! Read it very quickly which means I will have to force myself read it again. Of course it helps that I have read all the other relevant books that link to this and so understood the references.
Read more
One person found this helpful
Report abuse
See all reviews
Back to top
Get to Know Us
Make Money with Us
Let Us Help You
And don't forget:
© 1996-2021, Amazon.com, Inc. or its affiliates