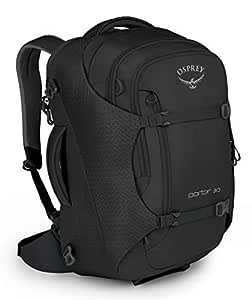 by Osprey
5.0 out of 5 stars 1 rating
Available from these sellers.

Colour Name: Black | Size Name: One Size
The Osprey Porter 30 is one the of the most versatile carry-on size travel bags that we make. With padded sidewalls, convenient organization and a substantial suspension for backpack-style carry that disappears when checking bags, the Porter Series has set the standard for deluxe duffels. This season brings a relocated and dedicated zippered laptop and tablet pocket-and functional storage options for items both big and small-with multiple access points. When a duffel isn't enough and backpacking bags are too much, the Porter is the answer.

Since Osprey’s founding in 1974, every single product design bearing the Osprey name has passed through the hands of owner and founder Mike Pfotenhauer, undergoing relentless scrutiny. From stitching the first lines of custom-fitted packs, to meticulously designing innovative products with intuitive features, to forging personal relationships with the sewing operators who construct the packs, Mike has been the unbreakable thread that makes Osprey a top company.

The comfort of a backpack, with the functional simplicity and storage capacity of a duffel.

With padded sidewalls, convenient organization and a substantial suspension for backpack-style carry that disappears when checking bags, the Porter Series has set the standard for deluxe duffels. This season brings a relocated and dedicated zippered laptop and tablet pocket—and functional storage options for items both big and small—with multiple access points. When a duffel isn’t enough and backpacking bags are too much, the Porter is the answer.

Anon
5.0 out of 5 stars Versatile and comfortable
29 June 2019
Color: BlackSize: One SizeVerified Purchase
Good quality, design and very comfortable for someone with a bad back. I use it everyday to work.
Fast shipping from US
Read more
Helpful
Comment Report abuse
See all 1 customer reviews
Write a customer review

Elizabeth M.
5.0 out of 5 stars Works as personal item on flights
14 December 2017 - Published on Amazon.com
Verified Purchase
My husband and I like to travel on a budget and with minimal things. With the airlines charging for bags now we decided to get this backpack as our personal item. We flew basic economy to Florida for 5 days on united. Basic economy now means you are not allowed a carry on or checked bag without a fee. These bags fit perfectly in the measurement station. Granted we didn't have any room for our feet... we were just happy to have all our things with us. When we measured our bags they were actually 2 inches longer and wider than the measurements online. So we were super pleased to get through every check point with no troubles.
Read more

Jelligeth
4.0 out of 5 stars Great pack, not for narrow shoulders.
10 September 2018 - Published on Amazon.com
Color: BlackSize: One SizeVerified Purchase
I'm an extremely frugal person to a fault and the idea of spending more than $25 on anything smaller than a fridge is usually preposterous to me. However after one miserable event wherein my husband and I obliged ourselves to drag our enormous wheeled luggage all through a poorly planned 2 hour walking tour across the cobbled streets of Rome, I've become obsessed with the one pack travel concept and since we intend to do a lot more travelling in the future, we decided it would probably not be a bad Idea to invest in a quality bag that won't give us severe and expensive back problems in the future. But the point is, I'm not a professional hiker or a travel backpack expert, but my dirt cheapness has compelled me to do academical amounts of research and my options basically came down to the Porter 30 or the Farpoint 40.

I got the Porter first, but after a week of trialing it out, in an exciting turn of events, I've decided to give this one to my husband and get myself the unfortunately more expensive Fairview 40. Do I feel like I'm spending too much money on something destined to hold things far less valuable than itself? Definitely. Was it worth it? Probably yes.

This bag will most definitely be joining us on all our future travels, from day or week-long trips to multi-week cross-planetary vacations, and probably will act as my primary city bag when there's not much walking to do, but I'll explain why I decided to give the Fairview a try despite discarding the option at the start.

First of all, the pros compared to the Fairview:
-The internal and external pockets are extremely well placed and more numerous on the Porter.
-The semi-rigid side walls gives it a nice structure, feels more sturdy, and makes it feel really cavernous and easy to pack.
-The black colour is actually black, (not some bizarre shade of green like the Farpoint and Fairview).
-The 30l has a smaller profile but allegedly holds just as much stuff as the 40 due to the rigid walls allowing for more effective packing (we'll have to see about that).
-The strap stowaway system, while slightly fiddly, is actually rather genius in that you can clip the shoulder straps into the waistband without having to pull the waistband entirely out if you don't intend to use them. On the Fairview, all straps are either in or out, so if you don't want to wear the waistband, they'll presumably end up flapping around on either side of you, making you resemble a small aircraft.

Functionally and aesthetically, short of a pair of hydration holsters, the Porter was perfect. The only downside for me was the straps. The shoulder straps are too wide and dig into my neck and the front of my shoulders simultaneously, and the hip straps somehow manages to pinch my hip meats between itselves and the tops of my pants when I speedwalk. These issues do not manifest when my husband wears this bag.

I'm by no means petite at around 1,67m and 80kgs, which is why I'm still skeptical about the Fairview which reads like it's tailored for elves, but the "specially for ladies" tweaks appear to address exactly those issues with narrower shoulder straps that curve inward at the shoulder, and curved hip straps that something or another, so we'll see about that once it's delivered.

Until then the Porter remains my favourite backpack, despite the minor shortfalls for my build.

If you're a guy, you'll be just fine with this pack.
Read more

Arielle M
5.0 out of 5 stars A Bag Sent From The Travel Gods
7 September 2017 - Published on Amazon.com
Only read this if you MUST. But just know this, you'll be wasting your time reading lengthy reviews when you could already be out traveling with this great bag!

The top pocket is great for quick access to small accessories. I usually put my chargers, small headphones, and a luggage scale in here. Maybe even some hand sanitizer also.

The flat pocket on the front is where I usually put my boarding pass and passport. I don't usually travel with anything else that would fit in there, so I won't ever "lose" them in this pocket. If security is a concern with storing a pass/passport in this pocket, those will also fit in the top pocket. The buckles (when fastened) get in the way of the zipper, so I don't think it would be all that easy for someone to get in there without me noticing.

In the next pocket, I keep a few ink pens, a word search puzzle book, my house/car keys, FitBit charger and straps, and whatever other small accessories make their way in there. This is also where I keep my snacks until I'm ready to nibble on something.

In the main compartment, there's room for a LOT of stuff. I would recommend a packing cube or two. On my inaugural trip with this bag, I was able to fit one pair of shoes, a medium packing cube, my toiletry kit, and my Ona Bowery camera bag. Since I also had my wife's MacBook Pro in the laptop compartment, the bag got a little heavy. I believe it weighed in at over 20lbs I won't always travel with such heavy cargo, but now I know that this backpack can handle the weight.

I never knew I needed my straps to tuck away until I got this bag. Now they're always tucked in unless I'm rushing through the terminal! The straps are comfy though! I only use the hip belt when my shoulders are hurting BEFORE putting the bag on my back. With what little padding the hip belt has, it isn't uncomfortable.

I heard this bag fits under airplane seats. I didn't believe it. However, I've seen a few reviews with photo proof of this! I measured the bag and compared it to Southwest's guidelines and it definitely met the requirements. I've also seen the bag stored under Delta and American seats. Looks like it'll stick out a little bit. So hopefully the flight attendants are nice! I wrote this review while on a plane. I decided to put my bag under the seat before getting off the plane, to see if the rumors were true. IT FITS! Photo attached.

I got this bag because I wanted to travel with less bags. If I can fit MORE things in ONE bag, and NOT break my back OR the bank, I'm all for it! There are plenty of other bags for 2x the price of this one, but sometimes you just don't need all the bells and whistles.

For the people rating this 30L bag based on how they wish it was a bigger bag: next time just buy a bigger bag! Buy what you NEED instead of buying what you don't need and complaining later that it doesn't work for you. Happy travels!
Read more

Kathy P
5.0 out of 5 stars I love this backpack
5 January 2018 - Published on Amazon.com
Color: BlackSize: One SizeVerified Purchase
I love this backpack. My daughter and I spent three weeks in Europe and were able to use just this backpack ( we each had one) we packed light but it was perfect. It’s lightweight and has plenty of compartments to keep your passport, dirty clothes, clean clothes, maps, tickets and anything else you need an easy reach. This one was a gift for my other daughter who wanted the perfect backpack for travel and weekend use. We walked 51k steps our first day and I was comfortable carrying it most of the way. I did get tired. I would recommend it to anyone.
Read more
44 people found this helpful
Go to Amazon.com to see all 212 reviews 4.7 out of 5 stars
Get FREE delivery with Amazon Prime
Prime members enjoy FREE Delivery and exclusive access to movies, TV shows, music, Kindle e-books, Twitch Prime, and more.
> Get Started
Back to top
Get to Know Us
Make Money with Us
Let Us Help You
And don't forget:
© 1996-2020, Amazon.com, Inc. or its affiliates