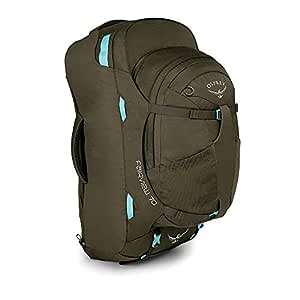 The World at your feet, the Fairview 70 is our lightest travel backpack yet. Featuring a zip-away spacer mesh ventilated backpanel, the Fairview can be carried like a backpack but packed like a suitcase. Fairview's backsystem offers an impressive women's specific fit, with an ergonomically shaped hipbelt, harness, yoke and backpanel. The strong and durable backsystem means you can carry your gear comfortably when travelling between hotels, the airport or beyond. Cushioned carry handles on the top and the sides allow you to easily grab the travel pack off airport baggage carousels. Your gear is readily to hand, with the inclusion of a large zippered lockable opening that allows access to the main compartment. The compression straps are also used to attach and secure a 13L 'zip and clip' daypack, which includes all the organisation you'll ever need; a top stash pocket for electronics and sunglasses, dual side pockets and a laptop sleeve. The daypack can also clip onto the harness of the main pack, in a 'kangaroo' style attachment. This provides a very secure way to carry your daypack when you want to keep your valuables or tickets to hand. Inside the main cargo bag is a mesh pocket ideal to separate dirty clothes and shoes. Internal compression straps fully maximise the capacity whilst securing your gear. For overnight trips attach a sleeping pad to the lower external straps. With all the organisation and clever features that you need, it's time to share your next adventure with a Fairview 70 backpack.

Since Osprey’s founding in 1974, every single product design bearing the Osprey name has passed through the hands of owner and founder Mike Pfotenhauer, undergoing relentless scrutiny. From stitching the first lines of custom-fitted packs, to meticulously designing innovative products with intuitive features, to forging personal relationships with the sewing operators who construct the packs, Mike has been the unbreakable thread that makes Osprey a top company.

Big volume for big journeys, with a zip off day pack for your daily excursions.

Lightweight and streamlined, the Fairview Series is an ideal travel pack for fast-moving globetrotters. Despite their minimalist weights, these women's specific, full-featured packs offer plenty of organization and travel-focused features. The zip-off daypack provides additional storage and is perfect for carrying around town by itself. The stowaway harness and hipbelt disappears for safe keeping when you check your bag, and durable fabrics offer added protection.

Fernanda
5.0 out of 5 stars So happy with my purchase and the with the seller
15 March 2019
Color: Rainforest GreenSize: Small/MediumVerified Purchase
The delivery was on time and the bag is exactly what I was expecting
Thanks!
Read more
Helpful
Comment Report abuse
See all 1 customer reviews
Write a customer review

Daniel O.
5.0 out of 5 stars Carry-on-able, Comfortable, Fits Everything!
8 November 2018 - Published on Amazon.com
Color: Rainforest GreenSize: Small/MediumVerified Purchase
MOST IMPORTANT INFO FIRST: we have now carried on this backpack with 5 different airlines (trans-atlantic, and several european regional flights) and have never once been told it’s too big. it fits top-side first into overhead bins (except the occasional small 1x2 plane where it has to be turned sideways). For at least 3 of those airlines the official measurements of the bag - daypack removes - were *technically* too big by a cm or 2 in one dimension: the height. However, we’ve never once been asked to measure it or been questioned on its size. It really does give off a “I’m just a carry on!” appearance. Rest of the review: I backpacked around Europe for 2mo with this. Incredibly comfortable and can fit SO MUCH. We used packing cubes inside and with the compression straps I was able to fit 7d of clothes and technology for 2 adults. (Hubby had the kids’ clothes and everyone’s shoes in his which is the male version of this exact pack, the far point). 7 flights and like a gazillion train rides later and nary a stitch is out of place. I’m so glad we did our research and bought this (and the male version) for our travels. It was the right choice and it has been everything we hoped. If I could change anything it would be to make the daypack a little bit bigger. it fits my 15” mac pro laptop so I really can’t complain, tho.
Read more
23 people found this helpful

Megan Bailey
5.0 out of 5 stars Never need a rolling suitcase again!
9 July 2018 - Published on Amazon.com
Verified Purchase
I LOVE this bag!! We traveled to Italy & this was my first time with a heavy duty backpack (I've never even hiked/camped/back packed). When I measured my torso I was in between the Small and Medium size, I went with the small and I think it worked out great (I'm 5'2'', 135 lbs, and petite frame). I traveled to Europe as light as I could and I was easily able to bring the whole bag as check on, I even got the larger bag into the overhead of the small 2x2 small plane!! I was concerned about the two straps at the bottom (the sleeping bag straps) possibly getting entangled when I checked the bag home, and although Osprey says they are removable they are extremely difficult to remove. Even with contacting Osprey I eventually had to trim the straps on the side a bit and try for a long time to get them loose. If you have the same concern, just remove before your trip or just cut them off, Osprey says you can buy replacement straps if you want.

The bag checked home perfectly. I had a few small breakables that I packed in the center of the bag (as securely as I could) and everything arrived safely. But honestly any big breakables just ship it home, or just focus on your trip, you don't need to bring gifts back for everyone :)

I made it a goal to keep the bag weight below 30 lbs at the start of the trip, but the bag really wasn't bad to carry. If you stand too long just take off till your on the move again. It was really handy being able to put the small bag in front to reach it easier, but its much more comfortable for weight distribution to be attached to the main bag for the longer walks.

The bag can get a bit hot since there isn't great air flow on the back side (for the big and little bag), but since I don't have anything to compare it to I didn't have any complaints, it wasn't a big deal to me.

I did purchase the travel bags to help with compressing and organizing and I think that greatly helped keep the bag small and for maintaining weight distribution.

The smaller bag is great for daily use, but really I prefer a full sized regular backpack since the daily bag is a bit on the small side. But if you don't buy a lot of stuff then the small bag is good. I love the small bag has the collarbone strap that is adjustable also, makes it very comfortable!

FYI the Misty Gray is more of a light army green in my opinion.

Remember, bring half of what you think you need and twice as much money! Your back/hips will thank you for it!
Read more
23 people found this helpful

Hanna
4.0 out of 5 stars Unless you're going on a huge trip you probably want a smaller version
12 July 2018 - Published on Amazon.com
Color: Rainforest GreenSize: Small/MediumVerified Purchase
I wish I could give this 3.5 stars, as that's what it really deserves. It fits everything, but because of that it's also basically too big. I rounded up because of durability, and because it comes in a smaller size, so being too big for my tastes is also basically my fault.

This thing is a beast, holding way more stuff than you need for most vacations. It's heavy duty and feels durable, and it carries surprisingly well for something that is essentially a large duffel bag you can strap to your back. I appreciate that the entire top panel zips open, as it was easy to find everything quickly. I took it on a three week vacation where high temperatures ranged from 50-85 degrees F, and I fit everything I needed in the main compartment, including three extra pairs of shoes. However, it was huge, and when wearing it I really had no idea where the back of the pack was, and I needed a lot of open space to swing it onto my back (not great in trains or metros).

The smaller backpack, however, is kinda useless in many situations, as it's quite small and oddly shaped. I went on an afternoon hike and it barely fit my lunch, water, camera, and an extra layer. The outside pockets fit my 0.5 L water bottles, but would not have fit anything larger (like a 1 L Nalgene bottle). I never wore the small pack in front, though that does seem like a nice feature - in theory. But with such a small bag, I generally wanted a larger day bag to fit the stuff I needed each day, even on days that were mostly transit.
Read more
16 people found this helpful

Amazon Customer
5.0 out of 5 stars It’s very sturdy and provides great support
3 April 2018 - Published on Amazon.com
Verified Purchase
Took on a 3 week trip across Thailand. I pack a lot so this worked well for my purposes and I had plenty of room for souvenirs. I checked the main backpack and took the smaller one as my carry-on. It’s very sturdy and provides great support. Nice color too! The only difference between this one and the next size down is that the main backpack is deeper, the length wasn’t any different.
Read more
21 people found this helpful

Mai Nguyen
5.0 out of 5 stars I personally love the color and was not disappointed that it was ...
13 December 2017 - Published on Amazon.com
Verified Purchase
CARRY-ON: Yes. If you don't pack up to the rim.

COLOR: Misty Gray is a greygreen (google sw 6181 for reference) so there, check it before you buy it. I personally love the color and was not disappointed that it was not black or neutral gray.

SIZE: I ordered an XS Fairview because the Small Farpoint (unisex version of this backpack) that I tried on in the store was a little large for me. Capacity wise, the XS 70L model is practically the same as the Medium 55L, barring an inch here and there.
Read more
21 people found this helpful
Go to Amazon.com to see all 37 reviews 4.5 out of 5 stars
Get FREE delivery with Amazon Prime
Prime members enjoy FREE Delivery and exclusive access to movies, TV shows, music, Kindle e-books, Twitch Prime, and more.
> Get Started
Back to top
Get to Know Us
Make Money with Us
Let Us Help You
And don't forget:
© 1996-2020, Amazon.com, Inc. or its affiliates