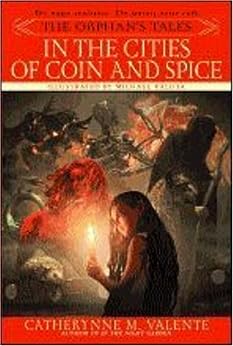 The Orphan's Tales: In the Cities of Coin and Spice Kindle Edition

Catherynne M. Valente was born in the Pacific Northwest, grew up in California, and now lives in Ohio with her two dogs. This is her fifth novel. --This text refers to the paperback edition.

"Astonishing work! Valente's endless invention and mythic range are breathtaking. It's as if she's gone night-wandering, and plucked a hundred distant cultures out of the air to deliver their stories to us."--Ellen Kushner, author of Thomas the Rhymer "Weaves layer upon layer of marvels...a treat for all who love puzzle stories."--Carol Berg, author of the Bridge of D'Arnath series "A fairy tale lover's wildest dream come true.... Valente has created a thought-provoking storytelling tour de force."--Publishers Weekly --This text refers to the paperback edition.

Joshua
5.0 out of 5 stars Great Book
Reviewed in Canada on 31 January 2013
Verified Purchase
If you like mythology read this series of books (this is the second). Well written and engrossing. you won't regret it.
Read more
Report abuse

E.J. Jones
4.0 out of 5 stars I wanna wake up in the city that never sleeps
Reviewed in the United States on 1 August 2015
Verified Purchase
I thought I knew Catherynne M. Valente when I read her wonderful Fairyland series, but I realized after beginning “In the Night Garden” that this work was something different entirely. Here we had stories couched in stories nestled in stories, seeming like they’d never connect until all of a sudden they did, in subtle, offhanded ways. And, of course, ridiculously beautiful language. As wonderful as “Night Garden” is, it ends a little abruptly, leaving plenty of room for “In the Cities of Coin and Spice to step in and fill the gap. It may not be as extraordinary as its predecessor, but this sequel fills the gap left for it admirably.

I won’t even try to trace all the stories found in this volume, though I do remember a few: coins made out of bones, stars bearing children, a city inhabited almost entirely by artists, a young woman made out of tea leaves. All of this eventually ties into the story of the Sultan’s son and the girl with the dark-lidded eyes (their relationship grows nicely over the course of “Cities,” by the way, not to mention the development of the boy’s sister Dinarzad).

However, I wish this book wasn’t just more of the same. For as much as I loved the first book, more of the same should be a godsend, but somehow the stories in this volume took longer to grab me. I got confused more easily, wished more often to return to characters I liked rather than listen to yet another story. (But that was mostly in the first half; the second was an improvement.) And after all this intricate storytelling, the conclusion of the frame story felt a little unsatisfactory. It made sense, but it just seemed too simple . . .

But I won’t spoil the rest for you, because this book is worth a read. Most people seem to like it as well as they liked the first, so maybe I’m just crazy for preferring “Night Garden.” Ah, well. It’s worth it anyway.
Read more
3 people found this helpful
Report abuse

C. Allen
5.0 out of 5 stars Beautiful, thought provoking and fantastic
Reviewed in the United States on 5 September 2014
Verified Purchase
I picked this book up due to my love of S.J Tucker's songs inspired from this book. And I'm so glad I did. The imagery and stories invoked and told are so beautiful and fantastical. Throughout this book, I just kept wanting to draw another scene that would come to mind. I would describe this as a fairy tale for teens and adults, but I'm sure those who are younger would appreciate them as well. I love how the stories intertwined, how questions were answered, and how how stories hundreds of pages away could be connected. This book took me on fantastic journeys, and I'm sure I'll be reading it again. Some of my favorite stories were the stories in the book of Scald, as I really loved the city of Spice and all its wonders, and in the second book I found I loved qlmost all the stories, the Djinn, Agrafena, Solace and the fire bird, but I also loved the City of Marrow and the imagery of it, and the story of Hadil and Hind.

This is one of the most enthralling reads I've enjoyed in a long time, the descriptions and the messages and fantastical lands were so amazing to read, I very much enjoyed this book.
Read more
One person found this helpful
Report abuse
See all reviews
Back to top
Get to Know Us
Make Money with Us
Let Us Help You
And don't forget:
© 1996-2021, Amazon.com, Inc. or its affiliates