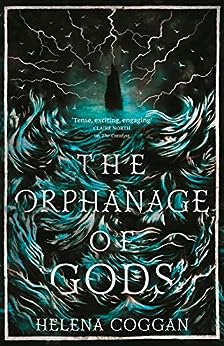 The Orphanage of Gods Kindle Edition

Imaginative, thrilling and highly readable fantasy novel from a bright young voice. Perfect for fans of the DIVERGENT series. --This text refers to the paperback edition.

Helena Coggan wrote the first draft of her debut novel, The Catalyst, when she was thirteen. It was published two years later and was named as one of 2015's Debuts of the Year by the Guardian and Amazon, and featured by The Sunday Times, the Observer, the Daily Mail, the Sun, the Daily Metro, the Sunday Express, Radio 4, NBC, and BBC Breakfast. Up until she started writing it, she spent most of her time waiting for her Hogwarts letter to arrive, or for the Tardis to appear in her garden; she would like to pretend she has stopped doing this now, but doubts she ever will. She lives in London with her parents and sister, and spends most of her time suppressing the thought that she should probably be doing her homework. This is her third novel. --This text refers to the paperback edition.

PRAISE FOR THE ORPHANAGE OF GODS, -

A twisting story full of surprises and rich, complex characters. Helena has created a beautifully written world of injustice, bravery and friendship., Claire North, author of THE FIRST FIFTEEN LIVES OF HARRY AUGUST

Vivid and intense. Helena Coggan had me on the edge of my seat, wondering who would betray, who would kill, and who would survive to the final page of this gripping new YA fantasy, Amanda Bouchet, USA Today bestselling author of The Kingmaker Chronicles

Helena Coggan's lyrical story of gods and humans kept me riveted to the page. The plot pulses with action and the characters are beautifully complex. This is a book that sparks with adrenaline and longing, all the way to the final page, Rebecca Ross, author of THE QUEEN'S RISING

Fast-paced and action-packed. Truly thought-provoking fantasy for young adults is often harder to find. But Helena Coggan's latest novel, The Orphanage of Gods, may have uncovered the magic formula. Featuring strong female leads, and firmly ditching the 'love will conquer all' trope, The Orphanage of Gods presents women as sidekicks-turned heroes, damsels-turned-warriors, and children-turned-leaders', Happiful Magazine

Helena Coggan is a writer and student based in London. She wrote her first novel, The Catalyst, at the age of thirteen; it was published by Hodder and Stoughton two years later, and named as one of 2015's Debuts of the Year by the Guardian and Amazon. The second book in the duology, The Reaction, came out when she was sixteen. She has been called 'the next JK Rowling' by NBC's Today, and in 2016 she was named by the Guardian as one of the most influential teenagers in the world. She is currently studying physics at university, for the sole purpose of building a TARDIS one day. The Orphanage of Gods is her third novel. --This text refers to an alternate kindle_edition edition.
Read more

There are 0 customer reviews and 7 customer ratings.
Back to top
Get to Know Us
Make Money with Us
Let Us Help You
And don't forget:
© 1996-2021, Amazon.com, Inc. or its affiliates