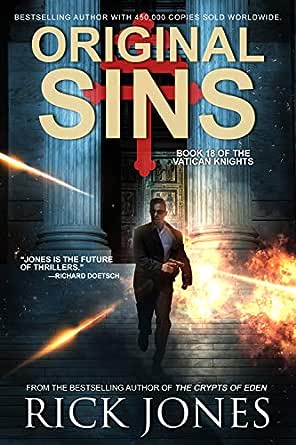 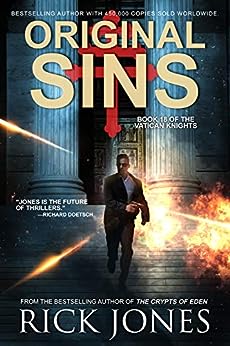 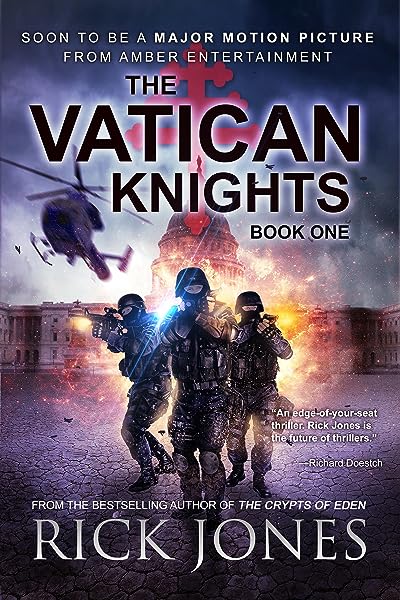 In a Washington, D.C. suburb, a family is executed by a government assassin.

While flying at an altitude of 10,000 feet, an editor of a newspaper is murdered.

In the middle of the night as a bus leaves Washington, D.C., travelers are gunned down in an act of terrorism.

Inside the Vatican, a cardinal receives spiritual insight about a deadly killer.

Before Kimball Hayden became a Vatican Knight, he was the commander of the Pieces of Eight, a kill squad that worked as part of a black-arm force of the CIA. He kills with impunity and acts with the cold fortitude of a machine. But when he begins to question the morality of his actions and the motives of his superiors, he is placed within the crosshairs by high-end principals who want to see him dead. But as Kimball Hayden begins to see the negative cost of his actions, he slowly becomes the prey to a predator with absolute power. Watching from the shadows, however, are the elite commandos of the Vatican Knights.

When Kimball Hayden is deemed expendable by his peers, will the Vatican interfere and offer him a way to the Light? Or will Kimball continue his path to Darkness and fall victim to those who wish him dead?

From the bestselling author of the Vatican Knights series, Rick Jones weaves a tale of one man’s fall from grace, a rise to redemption, and a journey of rediscovery.

Julie Johnson-begg
TOP 500 REVIEWER
3.0 out of 5 stars Rambling back story
27 December 2019
Format: Kindle EditionVerified Purchase
Though this prequel provided the back story to Hayden’s life prior to joining the Vatican Knights like the past few books there has been a repetitive emphasis on light and dark as a means of expressing Hayden’s internal conflict. As a fan of the Vatican Knights series I find this trend in the later books distracting to the story line and doesn’t serve to advance the story line. The very repetitiveness of standard statements constantly in the story line is annoying. Hayden surely is more articulate and vital character than one who expresses himself in self depreciating dogma. Looking forward to the outcome from Juggernaut- does Kimball emerge from the dark.
Read more
Helpful
Comment Report abuse
See all 1 customer reviews
Write a customer review

Ken F.
5.0 out of 5 stars Loved reading this!
7 February 2020 - Published on Amazon.com
Format: Kindle EditionVerified Purchase
I have read the first 17 Vatican Knights books. Much of this back to the beginning has been inferred in most of the books. This series will make a good TV series or blockbuster movie. If this is your first book of this series then I highly recommend that you hop on the roller coaster and start reading from 1-17. Then read the rest of Rick’s books which are also very addicting.
Read more

Kindle Customer
5.0 out of 5 stars Action packed.
13 January 2020 - Published on Amazon.com
Format: Kindle EditionVerified Purchase
As always I could not put this book down. This Series is fantastic. Rick delivers again. I fell in love with Kimball book one. This isn't just for guys. Enjoy
Read more
One person found this helpful

Speed Reader 1
5.0 out of 5 stars A long time coming
20 December 2019 - Published on Amazon.com
Format: Kindle EditionVerified Purchase
This book was a long time coming. A gifted writer, Rick Jones, brings Kimball to life with honor and humanity. He makes you see yourself and your choices through a lens of divine intervention, even if you don’t believe in it. It’s real. It’s there.
Read more

Ann Louise
5.0 out of 5 stars Original Sins
18 January 2020 - Published on Amazon.com
Format: Kindle EditionVerified Purchase
Interesting back story for Kimball Hayden. I have been enamoured by Mr. Jones and the Vatican Knights. Now that I've reached the end of these, I thought I would try the Eden saga. Thanks for filling my hours with marvelous stories, Rick Jones.
Read more

Miss Lyn
5.0 out of 5 stars Great Prequel!
19 December 2019 - Published on Amazon.com
Format: Kindle EditionVerified Purchase
I just loved this prequel.It tells the start of Kimball.Hayden and his association with the Vatican Knights.What a great beginning to an awesome series!
Read more
Go to Amazon.com to see all 11 reviews 5.0 out of 5 stars
Get FREE delivery with Amazon Prime
Prime members enjoy FREE Delivery and exclusive access to movies, TV shows, music, Kindle e-books, Twitch Prime, and more.
> Get Started
Back to top
Get to Know Us
Make Money with Us
Let Us Help You
And don't forget:
© 1996-2020, Amazon.com, Inc. or its affiliates