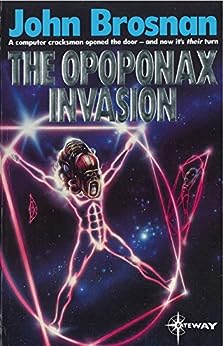 by John Brosnan (Author) Format: Kindle Edition
See all formats and editions
Sorry, there was a problem loading this page. Try again.

It's 2248, and in a society so electronically wired-up that everyone is obliged to be imprinted with their own personal circuitry, it takes a pretty sharp operator to beat the system.

Joster Rack is such an operator.

He is a unique and special kind of thief: an electronic chameleon who can penetrate and manipulate any computer going. For years he has been just one step ahead of the all-powerful corporations whose empire stretches from Earth to the moons of Jupiter and back - but now they are finally closing in on him. For Joster has made a serious mistake: in pulling off his most audacious heist yet, he has revealed an Achilles heel. But even worse, he has unwittingly sparked off the most terrifying threat the human race has ever had to face - The Opoponax Invasion.

John Raymond Brosnan was born in Perth, Australia, in 1947 but lived in London for all his adult life. He wrote most of the film entries in the first edition of The Encyclopedia of Science Fiction, and his influential books on the movies, include the seminal The Horror People, Future Tense: The Cinema of Science Fiction and The Primal Screen: A History of Science Fiction Film, as well as a number of acclaimed fantasy and SF novels. He died in 2005.

J. Brian Watkins
5.0 out of 5 stars Worth Searching Out.
Reviewed in the United States on 13 January 2007
Verified Purchase
Opoponax is otherwise known as myrrh--yup, an ingredient of perfume. But this little fact has nothing to do with this story, which is pretty standard science-fiction fare--scheming artificial intelligences and corporations, alien artifacts, plans gone awry, world in jeopardy kind of stuff. But Brosnan has an undeniable gift for science-fiction. Like the master chef that can make an unforgettable meal with any available ingredients, Brosnan has managed to craft a story involving gender issues, nanotech, AI and the internet that does not seem dated even though this book is over ten years old. And what makes Brosnan's science-fiction so enjoyable is that his characters are as believable as his science.

My first Brosnan book, "Mothership," was so good that I went looking for anything else he wrote. This was fortunate, because the cover art on my edition of Opoponax is so abominable that I would probably not have picked it up in a store. Reading Brosnan is a treat--highly recommended.
Read more
2 people found this helpful
Report abuse

Ian
5.0 out of 5 stars Brilliant
Reviewed in the United States on 10 August 2013
Verified Purchase
Fantastic story, get's you involved . The author has a great foresight in the future and what might happen in has time unfoldes Loved it. Great author.
Read more
Report abuse
See all reviews
Back to top
Get to Know Us
Make Money with Us
Let Us Help You
And don't forget:
© 1996-2022, Amazon.com, Inc. or its affiliates