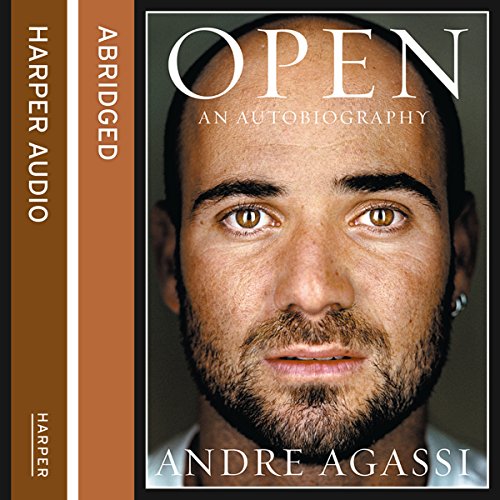 4.7 out of 5 stars
4.7 out of 5
5,054 global ratings
How are ratings calculated?
To calculate the overall star rating and percentage breakdown by star, we don’t use a simple average. Instead, our system considers things like how recent a review is and if the reviewer bought the item on Amazon. It also analyses reviews to verify trustworthiness.

FiCo
3.0 out of 5 stars You don't have to be a tennis fan to find this interesting
Reviewed in Australia on 6 October 2018
Verified Purchase
While the story is of tennis legend Andre Agassi and his dysfunctional relationship with his family and the tennis profession - it is also a story of an elite athlete trying to make sense of the only world he has ever know. In the public eye and under intense pressure. I am not into tennis that much, so some of the reflections on tennis games got a bit dull for me. But if you're into tennis you'll love it. Worth the read.
Read more
Helpful
Report abuse

Debra
TOP 500 REVIEWER
4.0 out of 5 stars Open
Reviewed in Australia on 17 November 2017
Verified Purchase
I didn't know much about Andre Agassi going into this, and now I feel I do. This is an open and honest autobiography. There were times reading this that I didn't like him all that much, and he is unapologetic about his negative traits. However, for me, that's the point of an autobiography. An honest look, otherwise, why bother? A great read. A great champion.
Read more
Helpful
Report abuse

Andrew Deck
5.0 out of 5 stars Simply a great story
Reviewed in Australia on 16 January 2019
Verified Purchase
Andre's story from childhood through to the present day, how he came to know himself and become the person he is today is a fantastic story. I am so grateful he spent the time to write this down to share it. I did not want to put this book down. Even if you have never played tennis or are not a tennis fan, Andre's journey through childhood to adulthood, to a great tennis star, father and husband will touch you.
Read more
Helpful
Report abuse

skylark
5.0 out of 5 stars Excellent
Reviewed in Australia on 27 July 2021
Verified Purchase
Very good. Enjoyed this very much. He has certainly grown over the years personally and professionally. A complex person with many great qualities.
Read more
Helpful
Report abuse

crashwest2830
4.0 out of 5 stars Great read
Reviewed in Australia on 16 October 2015
Verified Purchase
I enjoyed this autobiography very much. I could (almost) identify with what Andre was going through with his many ups and downs in his life. The way he highlighted his own insecurites and flaws certainly made him into a very believable and pleasant human being. I can understand how people would warm to him and be loyal for long periods. The way he valued those around him was very touching. I never liked Brad Gilbert as a player but Andre gives him a very encouraging makeover. I think Andre did this with most characters in the book - except those who had crossed him. I like the way he never took a backward step.
While it does go on a little at times, generally I found the flow very good. I enjoyed this book for all sorts of reasons and am sure many others will too.
Read more
One person found this helpful
Helpful
Report abuse

Deborah Pidgeon
5.0 out of 5 stars Excellent
Reviewed in Australia on 26 May 2021
Verified Purchase
I had heard this was very good and I was not disappointed. It was a fascinating look at the life of a tennis star and really was an eye opener as well as being well written. I highly recommend.
Read more
Helpful
Report abuse

Katie
5.0 out of 5 stars A great read.
Reviewed in Australia on 9 October 2020
Verified Purchase
A very well written book that captures your attention throughout! You come away with greater understanding and insight into the life and mind of our tennis superstars. Andre Agassi is a warm and colourful character whom I feel so privileged to have come to know through this book.
Read more
Helpful
Report abuse

Laura P Wilkinson
3.0 out of 5 stars Good lesson for parents
Reviewed in Australia on 3 June 2017
Verified Purchase
I've been a fan of Agassi for a long time and had been interested in reading this since it came out. There were parts at the beginning that were a bit slow but essential for understanding his thinking in the rest of the book. I loved recognising his story of the one time I saw him play albeit it briefly versus Courier at the Aus Open. I'm glad I read it and am even more impressed with what he continues to give back.
Read more
Helpful
Report abuse
See all reviews

Torodd Fuglesteg
5.0 out of 5 stars Thank you for being open to me, Andre
Reviewed in the United Kingdom on 16 May 2016
Verified Purchase
I am not a big tennis fan. I bought this book because of the cheap price, good reviews and because Agassi was a pretty big name earlier in my name. He and Brooke Shields who I have always had a secret crush on. Who has not ? So I bought this book.

I had a vague interest in Andre Agassi. What I got was an open athlete who has told his life as it was. I found a man baring his soul and his life. I found one of the most open, honest biographies I have ever read.
What I also found is one of the best biographies I have ever read. It grabbed me and did not let me go again until the final page and then some internet researches in wikipedia. I am very happy that he is still married to Steffi Graf and seems to be a happy man while I am, unknown to him, writing these lines. I really wish him all the best. This because I really feel I know this man now although we have never met and we have never exhanged letters. And that is all the hallmarks of a brilliant biography.

This books is among the five best biographies I have ever read. And I have read a looooot of biographies. Too many.
Read more
24 people found this helpful
Report abuse

pathfinder
5.0 out of 5 stars i wish i could give it more than 5*
Reviewed in the United Kingdom on 26 August 2018
Verified Purchase
I was recommended this book as one of the best autobiographies ever written. I can't confirm that as I don't usually read autobiographies but I found this book a fascinating eye-opener on many levels. It made me laugh out loud and made me cry real tears too. My heart was warned and my heart was broken. I really literally couldn't put it down. I read it every spare moment I had. It gripped me from the first chapter right to the very end. I felt his pain and frustration along with his highs and lows, I felt his pride and disappointmens. If you like tennis or don't like tennis, remember him (as I do) or if you don't remember him read this anyway. I am now recommending this to anyone who will listen.
Read more
10 people found this helpful
Report abuse

Mrs Valerie Craig
4.0 out of 5 stars Recommended
Reviewed in the United Kingdom on 16 August 2018
Verified Purchase
Andre Agassi endured a cruel childhood under the brutal tutelage of his father. He says he always hated tennis but continued non the less in what appears to be a life long attempt to please his father. Had the authorities known of the treatment he may well have been removed from the family and put into care. I was constantly wondering why his mother said and did nothing........He repeats throughout, his respect for her cool calm nature despite his nasty father, who reduced his sons to insecure, anxiety filled young men desperate to please at any cost. As a mother this is difficult to understand.... he suffered too much. His courage is indisputable. The diamond in his life is Stephie Graff and his children, with her he finds peace and the desire to set up a school which is not only about tennis but has a syllabus that includes the teaching of self worth and integrity.The book is well written and fast moving. It gives a great insight into the ego driven, grubby world of professional tennis and those who survive it somehow.
Read more
4 people found this helpful
Report abuse

Janine Louisa
5.0 out of 5 stars The honest story of a brilliant conflicted man
Reviewed in the United Kingdom on 26 July 2018
Verified Purchase
I thoroughly enjoyed reading Andre Agassi' s often painful autobiography. I love tennis and remember what a lively, entertaining and talented player he was and how popular he became at Wimbledon. But I couldn't have guessed what a difficult struggle he had with his motivation and self belief because of his sense of having never chosen to become a tennis player. Andre's difficult start is a strong theme throughout the book. Eventually as his life journey progresses and he builds the team around himself that can support and challenge him he begins to learn to manage and even sometimes to enjoy the gift of his tennis genius. We accompany him through triumph and disaster and learn with him that winning is never as important as love, friendship and loyalty. Eventually Agassi finds love and even appreciation for the loyal fans who supported and willed him on through his many trials. His true calling was to give back to others and help those with less advantages who he could help because of the success his often unwelcome career had brought him. An exhausting read, living with Andre through so many tennis and personal successes and failures but I was always on his side pulling for him to come through and take the next step.
Read more
One person found this helpful
Report abuse

comm88
5.0 out of 5 stars Brilliant!!!
Reviewed in the United Kingdom on 18 August 2020
Verified Purchase
Far and away the best sporting bio I have ever read. Brutally and unflinchingly honest from, a man who was, for most of his career, much maligned and very much misunderstood. He is softly sensitive and deeply caring and comes over as a truly great guy who succeeded against some desperate odds and evils - some of which he made for himself - and he has found his own fount of true happiness after all his tennis success. The thing he is doing along with his lovely wife for the underprivileged, disenfranchised and often hopelessly helpless is amazing and deserves the widest recognition and all of our honest appreciation. A truly monumental read that is well worth your time.
Read more
One person found this helpful
Report abuse
See all reviews
Back to top
Get to Know Us
Make Money with Us
Let Us Help You
And don't forget:
© 1996-2021, Amazon.com, Inc. or its affiliates