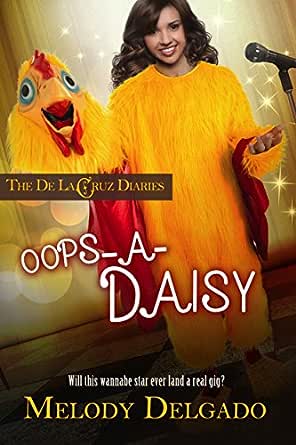 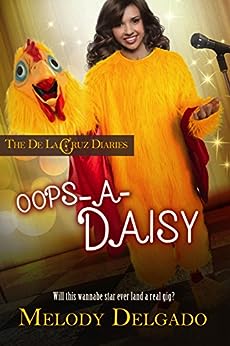 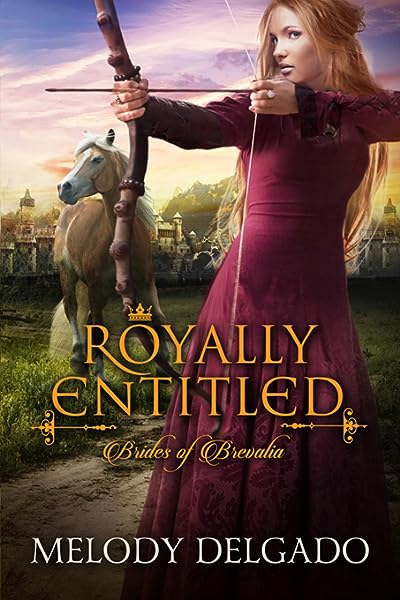 Who wants to be stuck wearing a shaggy dog outfit or a chicken suit on television? Twelve-year-old aspiring singer, actress, Daisy De la Cruz, that’s who. She’ll do and wear just about anything to get ahead in the entertainment industry. But will all her embarrassing moments pay off and land her a spot in her arts magnet school’s coveted master class where she’ll be rubbing shoulders with top professionals in the entertain-ment industry? Or will she be doomed to play the role of an animal, vegetable or min-eral forever?

Melody Delgado is a classically trained vocalist and has performed in concerts, recitals and conferences along the east coast and overseas. She was also a music educator for a number of years in both Florida and Massachusetts. Her first job after college was working for an NBC-TV affiliate where she did voiceovers and also shot a commercial where she played the role of a clown. She squeezed a squeaky toy bugle as she sashayed in front of the camera. Melody has also led and served in benevolent ministries in North America and the Middle East. She currently works as a writer. Look for more books about Daisy and her quirky family in upcoming books included in the series, The De La Cruz Diaries. She has also written ROYALLY ENTITLED, an inspirational romance for women and teens, part of the Brides of Brevalia Series, also published by Clean Reads. You can find her on facebook, twitter and at her website. Melody lives in Florida with her husband and children.
click to open popover

Carol Riggs
5.0 out of 5 stars Lively and Thought-Provoking Read
6 October 2017 - Published on Amazon.com
Verified Purchase
I don’t usually read Middle Grade books for readers of this age, but I was checking out another of Melody Delgado’s books, ROYALLY ENTITLED, and after reading first-page samples of both, decided to buy this one too.

I enjoyed the lively, chatty voice of the main character, Daisy. The pacing was good, the characters fun. I loved the humor, such as their new dog eating like a “high-voltage vacuum cleaner.” It was a nice surprise to see her family going to church and Daisy thinking about the sermon afterward. Her doing so wasn’t preachy or dwelt upon in any length, but rather more as a natural thread that was organic to the character’s growth; that was refreshing, since most books for kids this age don’t include any religion or religious thoughts.

Throughout the novel, there were great explorations about following one’s dreams, navigating the storms of friendship, and untangling the definition of success. I recommend this book, especially for “middle grade” readers ages 8-12.

Eve Culley
5.0 out of 5 stars Am I going to be a chicken forever?
23 September 2017 - Published on Amazon.com
Verified Purchase
This was my first book to read that was based on a Hispanic family. I wasn't sure what to expect but what I was by the end of the book was totally captivated by the main character and her family. The message of dealing with bullies, family issues and striving to have a music/actor career was handled in a humorous, down to earth living with good family values. As a mother and grandmother, I can only hope that my children and grandchildren are as well grounded and appreciative of what the good Lord has given them as Daisy De la Cruz is. Good job Melody, good job!
Read more
One person found this helpful

Rachel Magee
5.0 out of 5 stars Funny and heartwarming
18 September 2017 - Published on Amazon.com
Verified Purchase
My daughter and I both loved this book. Oops-A-Daisy is funny and endearing with a good dose of life lessons mixed in. I instantly fell in love with the main character, a twelve year old girl with dreams of making it as a famous singer. She is funny and real, and her journey is captivating. My daughter laughed throughout the book and stayed engaged with the story. As a mother, I appreciate the positive message of working hard to achieve your dreams and being a good friend. This is a great choice for an entertaining and positive middle grade book. I can’t wait to see what Daisy is up to next!
Read more
One person found this helpful

CS
5.0 out of 5 stars A refreshing story
6 October 2017 - Published on Amazon.com
Verified Purchase
A refreshing story with a great pace. Loved the humor throughout and would definitely read more from this author. My favorite character by far was the little sister. She cracked me up! Would recommend to anyone for a quick, fun read.
Read more
2 people found this helpful

Sue Ford
3.0 out of 5 stars Funny middle grade
26 September 2017 - Published on Amazon.com
Verified Purchase
This book made me laugh and I loved the main character’s persistence to reach her goals. But I was frustrated how the dog almost disappeared from the story—whatever happened with him? The church scene was a surprise without any hints leading up to it. I liked the multicultural aspect, but get tired of mean girl themes.
Read more
Go to Amazon.com to see all 12 reviews 4.6 out of 5 stars
Get FREE delivery with Amazon Prime
Prime members enjoy FREE Delivery and exclusive access to movies, TV shows, music, Kindle e-books, Twitch Prime, and more.
> Get Started
Back to top
Get to Know Us
Make Money with Us
Let Us Help You
And don't forget:
© 1996-2020, Amazon.com, Inc. or its affiliates