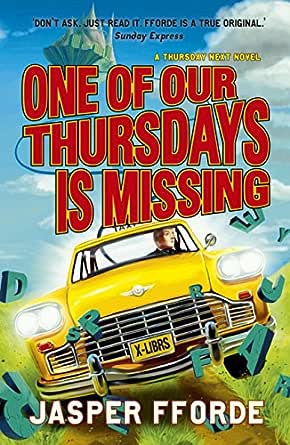 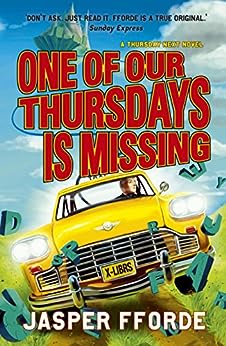 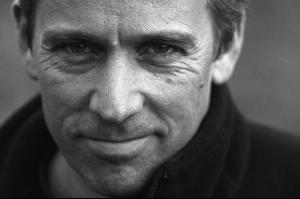 One of our Thursdays is Missing: Thursday Next Book 6 Kindle Edition

Thursday Next returns in her sixth inventive, funny and fantastical adventure - a Number One bestseller.
See all Product description

Glenys
5.0 out of 5 stars Wonderful
4 September 2013 - Published on Amazon.com
Verified Purchase
This was my first Jasper Fforde book and after I began to read it I realised that he is quite a talent! What a wonderous idea to have text based life forms. A very unique view point of reading and the written word. If you are not a bibliophile, then don't bother. The pace is fast and the action fantastic. And incredible find.
Read more

C. Bowden
4.0 out of 5 stars Take me back to Swindon
2 November 2013 - Published on Amazon.com
Verified Purchase
I really like all of the Thursday Next series but this is a 'like' rather than 'love' along with the other of the books that is entirely set in Bookworld, The Well of Lost Plots. I find the books set in an alternative Swindon more entertaining. It could be just me.
Read more

kathy holloway
5.0 out of 5 stars one of our Thursdays is missing.
16 April 2011 - Published on Amazon.com
Verified Purchase
Jasper Fforde has done it again.
A truly entertaining and very clever novel following on in the Thursday Next series.
I have yet to read a book of his that I have not enjoyed!!

Dion
5.0 out of 5 stars carrying on the story
4 January 2013 - Published on Amazon.com
Verified Purchase
It carries on the story in good tradition. It's not as fast paced as some of the others, but still a great read. I enjoyed it
Read more

Kindle Customer
4.0 out of 5 stars Always a fun read
31 March 2011 - Published on Amazon.com
Verified Purchase
I love Jasper Fforde....his work is always so tongue in cheek and full of literary puns. If you like intelligent books which don't take themselves too seriously...well not seriously at all really...then you'll love his work. This is his latest and I thought it was up there with the rest of them....can't beat the first one The Eyre Affair though so I've only given it 4 stars.
Read more
One person found this helpful
Go to Amazon.com to see all 11 reviews 4.2 out of 5 stars
Get FREE delivery with Amazon Prime
Prime members enjoy FREE Delivery and exclusive access to movies, TV shows, music, Kindle e-books, Twitch Prime, and more.
> Get Started
Back to top
Get to Know Us
Make Money with Us
Let Us Help You
And don't forget:
© 1996-2020, Amazon.com, Inc. or its affiliates