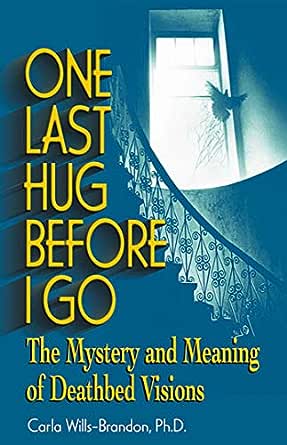 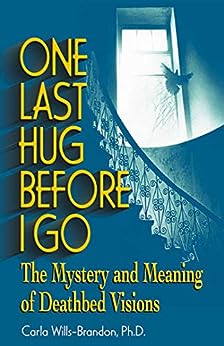 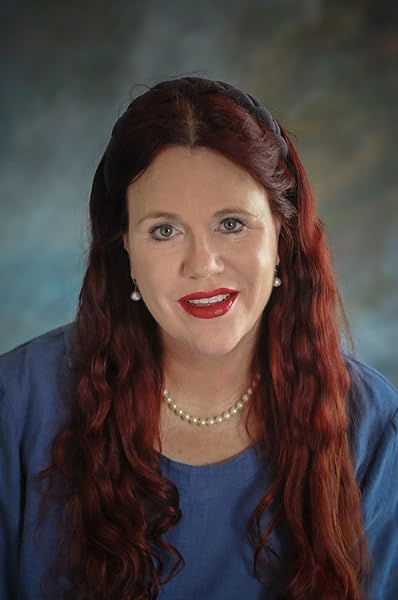 One Last Hug Before I Go: The Mystery and Meaning of Deathbed Visions Kindle Edition

Carla Wills-Brandon, M.A., is a Licensed Marriage and Family Therapist and the author of twelve published books discussing topics ranging from relationships, healthy intimacy, sexual healing, self esteem, sexual trauma, addiction and recovery to grief, death, afterlife research and spirituality. She has appeared on numerous television programs and has lectured across the United States and the United Kingdom. --This text refers to an alternate kindle_edition edition.
click to open popover

Ash
5.0 out of 5 stars A Nice Purchase
Reviewed in India on 22 May 2014
Verified Purchase
I came to know about this book while i was surfing the website paranormal.about.com from my mobile . Upon reading a few sample cases of deathbed visions from that site , i decided that i would purchase this . And right now its in my bookshelf .
Go for it , if u have a hunger for paranormal knowledge .
Read more
Helpful
Sending feedback...
Thank you for your feedback.
Sorry, we failed to record your vote. Please try again
Report abuse

donnag
5.0 out of 5 stars You Will Love This Book
Reviewed in Canada on 1 June 2013
Verified Purchase
One Last Hug Before I Go is an awesome book. I highly recommend it to expand your knowledge about life and death.
It will lead you to reading more books like this. I have read many books on death, NDR and so forth, the more you read the more you want to know.
Read more
Helpful
Sending feedback...
Thank you for your feedback.
Sorry, we failed to record your vote. Please try again
Report abuse

Pandy's Mum
3.0 out of 5 stars Needed a good copy editor
Reviewed in the United States on 24 February 2014
Verified Purchase
I enjoyed this book, though I found it a little lightweight and contrived. As an ex-editor, narrative inconsistencies annoy me, and while they are understandable errors in works of fiction, when they occur in supposedly factual-based works, they call into question the author's honesty and trustworthiness. At one early point in the book, the author describes herself alone in bed the morning after her father-in-law's death, joined by her youngest son, and then somewhat later by her husband and older son. A touching scene. Later in the book, however, referencing the SAME morning, she describes awakening alone in bed, getting up to get coffee,and finding her husband in the kitchen, where he relates the experience of having been visited by the apparition of his father in the living room earlier that morning. No mention of either son.

There are other minor discrepancies along the same lines, and curious omissions ( she describes awakening on the morning of her mother's death and sitting by the phone as a "deathbed vision", later referred to as a possible "dream" or "hallucination, " though there is no visual reference to any occurrence particularly out of the ordinary other than her instinct hat her mother had passed). Such occurrences tend to undermine the veracity of her book, and lead the reader to view it as more a collection of fanciful tales rather than reliable research and evidence, as it purports to be. For that reason, I felt somewhat betrayed and lost my trust in the author's credibility.
Read more
14 people found this helpful
Helpful
Sending feedback...
Thank you for your feedback.
Sorry, we failed to record your vote. Please try again
Report abuse

oracleofthejedi
5.0 out of 5 stars Great source of information
Reviewed in the United States on 22 October 2016
Verified Purchase
I have read all but the last 30 pages of her book. She documents a lot of phenomena (some of which I have experienced). It is comforting to know I am not alone in my experiences. Death is but a transition to a higher state of consciousness. My only small critique is that the author blanket labels several type of phenomena associated just before, during, or after physical death as, "death bed visions." I highly suggest it for those who have experienced phenomena related to the death of a loved one.
Read more
4 people found this helpful
Helpful
Sending feedback...
Thank you for your feedback.
Sorry, we failed to record your vote. Please try again
Report abuse

Michael E. Tymn
5.0 out of 5 stars A MUST FOR THE SPIRITUALLY CHALLENGED
Reviewed in the United States on 6 September 2000
Verified Purchase
If a spiritually-challenged friend or relative -- one who has difficulty believing in survival of consciousness at death -- indicates that he or she is ready to let a little light penetrate the ego, you might want to consider giving this book as a gift. It offers much food for thought.
Evidence of survival comes to us in different ways -- near-death experiences, mediumship, past-life regression, and astral travel being the most often cited in recent years. However, the Death Bed Vision (DBV) is one that is equally strong and not so fully explored in recent publications.
Sir William Barrett of England wrote the best-known book ("Death-Bed Visions")on this subject in 1926. But before him, astronomer Camille Flammarion's 1922 book offered a comprehensive report on DBVs. In 1977, Osis and Haraldsson researched the subject and reported on it. Now, Dr. Carla Wills-Brandon brings us up to date. She cites many of the best case studies of Barrett, Flammarion, and Osis, but add her own interesting, intriguing and informative research, including several personal experiences that are very convincing.
DBVs inlcude reports of the dying seeing deceased loved ones waiting for them as well as glimpses of the "other side," reports by bedside witnesses who have observed spirits in waiting, and other witnesses, including doctors and nurses, who have seen the spirit body leave the earthly shell.
The non-spiritually-challenged should also find this book very helpful and reinforcing. It will give them some indication as to what to expect or look for when friends or relatives prepare to cross over, and, of course, what they can look for when it is their time to graduate to the realms of higher vibration.
Having read several hundred metaphysical books, I'd have to put this in the Top 10. I intend to give copies to my two daughters, both registered nurses. For anyone who notes that all of my Amazon reviews are five-star, I should comment that I don't do a review unless I think the book rates five stars. This one rates more than five stars, but the rating system doesn't allow for more. If you don't read this one, it's your loss.
Read more
51 people found this helpful
Helpful
Sending feedback...
Thank you for your feedback.
Sorry, we failed to record your vote. Please try again
Report abuse

PMD1124
5.0 out of 5 stars Wonderful book
Reviewed in the United States on 14 June 2013
Verified Purchase
When my family and I realized that my father was in his last few weeks of life, I tried to prepare myself in every way possible for the inevitable. I am a firm believer that those of us who are so close to stepping over to the other side can actually see what's waiting for them. The experience of caring for my father provided me with all the proof I ever needed to know that there is more to life than what we see in this world-- and this book helped me to understand that the phenomena we were experiencing in my family was not just a matter of wishful thinking or hallucinations. The things we experienced were not only real, but we were fdar from alone in experiencing them.

The author has done a wonderful service to those of us who have struggled with witnessing and helping a loved one through the dying process. Although nothing can ever really take away the grief, it is a comfort to know that our loved ones truly are going to a better place when they leave this world. And one thing I was able to take away from this experience (and from this book) is that when it's my turn to shuffle off this mortal coil, I know my Dad will be waiting for me. And probably telling me to hurry it up.

A wonderful, heartfelt book that came into my life when I really needed it most. Many thanks to Ms. Carla Willis-Brandon for sharing her experiences with the world.
Read more
2 people found this helpful
Helpful
Sending feedback...
Thank you for your feedback.
Sorry, we failed to record your vote. Please try again
Report abuse

Sharon Preston
5.0 out of 5 stars Feel Good Book
Reviewed in the United States on 21 May 2014
Verified Purchase
If you have lost someone, this book makes you feel much better about the experience. I have read almost all of Carla's books and enjoy each one. After losing my father I reread a couple and it helped my grieving process. I look forward to seeing my father again someday.
Read more
6 people found this helpful
Helpful
Sending feedback...
Thank you for your feedback.
Sorry, we failed to record your vote. Please try again
Report abuse

ming2
5.0 out of 5 stars must read book
Reviewed in the United States on 22 June 2010
Verified Purchase
Just suffered passing of my brother.I wished I had read this book before his passing for I would have had the chance to ask questions and have understanding in the final days of his life.A must read book for every family before it is needed.Now I am making sure my loved ones read and research book topic so they may have comfort and understanding when the time comes.Excellent book.
Read more
3 people found this helpful
Helpful
Sending feedback...
Thank you for your feedback.
Sorry, we failed to record your vote. Please try again
Report abuse

Regina Jozefek
5.0 out of 5 stars Its real
Reviewed in the United States on 18 May 2014
Verified Purchase
I just love the confirmation that things like this are real and that there are other people who experience things like this!
Read more
2 people found this helpful
Helpful
Sending feedback...
Thank you for your feedback.
Sorry, we failed to record your vote. Please try again
Report abuse

John buck
5.0 out of 5 stars opens your eyes
Reviewed in the United States on 22 April 2017
Verified Purchase
Very interesting and moving.
Read more
Helpful
Sending feedback...
Thank you for your feedback.
Sorry, we failed to record your vote. Please try again
Report abuse

apples
5.0 out of 5 stars Wonderful!
Reviewed in the United States on 2 July 2014
Verified Purchase
Wonderful book -- a must addition to any library of such experiences.
Read more
One person found this helpful
Helpful
Sending feedback...
Thank you for your feedback.
Sorry, we failed to record your vote. Please try again
Report abuse