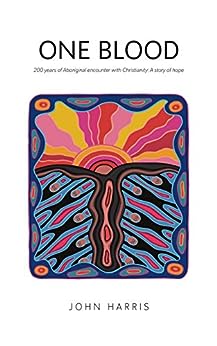 One Blood: 200 Years of Aboriginal Encounter with Christianity: A Story of Hope Kindle Edition

Dr. John Harris has had a lifelong interest in Aboriginal people, in their culture, history and languages. He is the author of numerous books and papers on Aboriginal history, education, language and Christian experience. He spent many years as a teacher and school principal in Aboriginal communities. His most recent position was director of the Translation and Text Division of the Bible Society in Australia where a major responsibility was the translation of the Bible into Indigenous languages. He is also an ordained Anglican priest. John holds a PhD in Aboriginal languages. He was awarded a Doctor of Theology for writing One Blood, the first edition being chosen as Religious Book of the Year. He was recently honoured by the Archbishop of Canterbury and Her Majesty the Queen by being awarded a Lambeth Doctor of Divinity for his advocacy of Aboriginal people in both the Church and the wider community. In retirement, John continues his active involvement in Aboriginal issues through Bible translation, writing, and speaking. He has a strong commitment to supporting Aboriginal people to revive endangered languages. He is married to Judith and they have three children and six grandchildren. --This text refers to the hardcover edition.

This is a monumental work of research and scholarship, of deep insight and discernment...opening up with great clarity the vista of tragedy and despair for the Aboriginal people... (Christian Book Newsletter)

This is a book of immense power...a major event in the history of Australian self-understanding. Do not underestimate it. (Adelaide Advertiser)

John Harris has written an astonishingly powerful and comprehensive book... It is a passionate work, but one that is also beautifully controlled and balanced. It makes enthralling reading... (Lutheran Theological Journal)

One Blood is a powerful, disturbing and inspiring book...It has certainly helped my own self-understanding...(The Canberra Times)

One Blood is an immense book, immense in its physical size ( almost 1000 pages) and immense in its scope and breadth of treatment of the encounter between Aboriginal people and those who came to them as Christian missionaries, an encounter spanning 200 years and a whole continent. No one knows more about this subject than John Harris and no one else will ever deal with it again with his unique mix of scholarship and passion... (Church Scene)

Ther are some books which helped me to understand my country: books like Facey's A Fortunate Life and Morgan's My Place. I now add Harris' One Blood. Don't miss it. (Southern Cross Magazine)

This is an important book...for what it does for the church, for the craft of history...and for the understanding of the Australian people...It is a compelling story of great sadness as well as of great triumph, and essential book for...the future development of Australian Society or Christianity in this country...(On Being Magazine)

One Blood gives an excellent overall view of Christianity's missionary efforts, both Protestant and Catholic. It is written with admirable objectivity, allocating praise and blame where due... (The Catholic Leader)

Evan P Groombridge
5.0 out of 5 stars Excellent overview of Christian outreach among Australian Aboriginal peoples
Reviewed in the United States on 20 January 2014
Verified Purchase
John Harris has done an outstanding service for all Australians through compiling this overview of Christian outreach among Aboriginal people. I was blind to the treatment and issues faced by Aboriginal people since the English first settled in Australia. I am delighted to know now about the Australian heroes who left their own homes and cultures to proclaim Jesus Christ to Aboriginal cultures/peoples. This huge book has been very helpful to understand the situations throughout Australia from both the settlers/white Australian and Aboriginal perspectives. I am looking forward to reading in the future his summary of the develops in Aboriginal treatment and evangelistic outreach, especially amongst indigenous Aboriginal churches, since the Mabo court case. I would thoroughly recommend this book to both Christian Australians and secular Australians. Some people may not admire the missionaries' motives. I admire such people who tried to protect and bring benefit to the Aboriginals. It has been interesting to read how the early missionaries and settlers could just not fathom the culturally different world views of the Aboriginals. I trust I will be able to care for Aboriginal Australians much better after the insights I have gathered from this great book.
Read more
One person found this helpful
Report abuse

Frank Dunster
5.0 out of 5 stars A must read book.
Reviewed in the United States on 4 August 2013
Verified Purchase
I think this book has opened my eyes to historic attitudes of early explorers it mind that could not understand people of different colour and non English language and different ways of life. The Australian Aborigine was a unique race of people who had freedom to roam and exist and live with their own ethical code of conduct. Progressive Governors and leading churchmen could not always comprehend that there were other creatures who occupied a new land as traditional owners who saw invaders of contrasting colour that appeared aggressive and invasive to their land. The early explorers thought they were superior to something they had never before encountered, a people who could not communicate in their language whose only natural weapon was a spear and a bend a stick, a boomerang, for daily gathering of food. Typical of many invaders they raped and pillaged and brought foreign diseases that killed and maimed these innocent people. A different history that I was taught in school in the 1930's. An excellent book that needs a reprint and widely advertised and distributed.
Read more
One person found this helpful
Report abuse

David Marshall
5.0 out of 5 stars One Blood tells the forgotten story of early missions tot he Aboriginal peoples of Australia
Reviewed in the United States on 16 January 2014
Verified Purchase
This is a sobering book about a shameful period in Australia's history that has largely been forgotten. When Australia was invaded by British settlers the aboriginal inhabitants were not only dispossessed they were often hunted down and killed without mercy. The Christian churches were very slow to try to protect and to evangelise them, but with significant exceptions. A few individuals carried out heroic missionary activity in the face of much indifference and opposition. This is a history that should to be known by all Australian Christians.
Read more
Report abuse

Aino Lee-Jones
5.0 out of 5 stars A must read for all Australians
Reviewed in the United States on 11 May 2013
Verified Purchase
This book is a superb historical account of certain Christian groups' attempts to help the Australian indigenous population to deal with the European invasion of their lands. It deals honestly with the successes and failures of these people as they worked with the communities. It is a must read for those who are seeking to understand the Indigenous people of today.

This book has been out of print for quite a while and its updated version (to mid-1993 events)and its return in a digital format will, I am sure, be welcomed by many new readers seeking to broaden their understanding of the issues as relating to the Australian Indigenous communities. It still contains the many illustrations, maps, references and footnotes which allow the serious reader to be able to follow up on issues of interest.

Krisha Adams
5.0 out of 5 stars Amazing
Reviewed in the United States on 24 December 2018
Verified Purchase
An amazing read through Christian contact with aboriginal people in Australia. Shows the good and the bad, plenty of bad. Personally challenging in so many ways, but also has hope. A must read for anyone wanting to know the relationship between the church and aboriginal people.
Read more
Report abuse
See all reviews
Back to top
Get to Know Us
Make Money with Us
Let Us Help You
And don't forget:
© 1996-2021, Amazon.com, Inc. or its affiliates