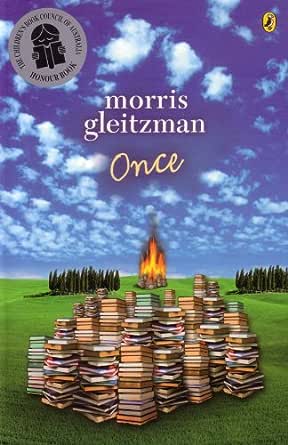 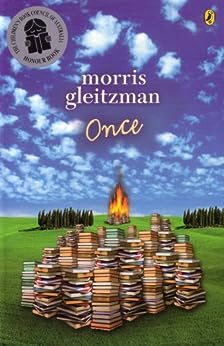 "Like The Boy in the Striped Pajamas (rev. 9/06), this Holocaust parable plays its main character's naiveté against readers' likely knowledge of the historical realities, but here the juxtaposition is believable and not at all precious; like The Book Thief (rev. 3/06), the novel extols the power of storytelling in the face of tragedy, but Once pits Felix's stories against even deeper ugliness. ... Gleitzman manages to find a grain of hope in the unresolved (and likely dire) conclusion, but this is the rare Holocaust book for young readers that doesn't alleviate its dark themes with a comforting ending." --The Horn Book, Starred Review

"This gripping novel will make readers want to find out more" --Booklist --This text refers to the paperback edition.

"Morris Gleitzman's children's stories are among the most widely read and loved." (AudioFile Magazine)

"Morris Gleitzman has discovered the difficult trick of changing reality so that poignancy and laughter are never far apart." (The Australian)

"Gleitzman's reading is flawless and as a result the three disc, three hour listening experience seems to last only minutes. Gleitzman's postscript places the story firmly among the actual events of Hitler's Holocaust adding another instance of where 'Morris Gleitzman has discovered the difficult trick of changing reality so the poignancy and laughter are never far apart.' The cover artwork is identical to that of the paperback edition and the listener is privileged by hearing the author read his own inner creative voice as no one else can. This short audiobook, complete and unabridged, is a must for every school library. Listeners will not baulk at the three discs and three-hour investment of their time. In return, they will be privy to a new genre of comic but no less insightful historical fiction." (Fiction Focus)

"Set during the Holocaust, this is the tale of Felix, a young Jewish child who runs away from a Catholic orphanage to try and find his parents. He meets other orphans who join his journey, and he is eventually forced onto a train heading for the concentration camps. Gleitzman spares no horror divulging details of Nazi brutality, and he conveys the truths in small bits through Felix’s present-tense viewpoint. Felix copes with the tragedy of his life through storytelling, making the audio most effective. Always seeking to see the bright side, Felix helps others escape through fantasy as well, weaving tales to make those around him feel better. Gleitzman's resonant voice, hushed tones, Australian accent, and impeccable pacing draw listeners to this compelling tale. A hauntingly hollow Jewish musical refrain separates chapters and enhances the mood." (Booklist) --This text refers to an alternate kindle_edition edition.

Morris Gleitzman has been a fashion-industry trainee, frozen-chicken defroster, department-store Santa, sugar-mill employee, and screenwriter, among other things. Now he's one of Australia's best-loved children's book authors. His books have been published all over the world.

A story of friendship, belonging and survival from the bestselling author of Girl Underground and Worm Story. --This text refers to an alternate kindle_edition edition.
Read more

4.7 out of 5 stars
4.7 out of 5
844 global ratings
How are ratings calculated?
To calculate the overall star rating and percentage breakdown by star, we don’t use a simple average. Instead, our system considers things like how recent a review is and if the reviewer bought the item on Amazon. It also analyses reviews to verify trustworthiness.

Charlie
5.0 out of 5 stars really fantastic
Reviewed in Australia on 21 May 2018
Verified Purchase
A really sad but good book.

It was about a boy called Felix and his parents went... well, somewhere, at least. He got sent to an orphanage and he found a whole carrot in his soup. then he meets a girl called Zelda and becomes friends with her and both hate Nazis and try not to be attacked by them...
Read more
One person found this helpful
Helpful
Report abuse

Kindle Customer
5.0 out of 5 stars Wow
Reviewed in Australia on 27 May 2020
Verified Purchase
Wow? Just wow. This book is truly amazing, and I enjoyed reading it a lot. Though there are some sad parts in it, Felix has stayed brave. I just wish I could say the same for myself.
Read more
Helpful
Report abuse

Jamon
4.0 out of 5 stars A Good Read
Reviewed in Australia on 12 August 2018
Verified Purchase
I had this book in school and didn't read it. I was not interested. That was years ago, I decided to give the book a chance and it was actually a good read. Fast paced and adventurous. I would happily recommend this book.
Read more
Helpful
Report abuse

Jane Sadler
5.0 out of 5 stars Best book ever
Reviewed in Australia on 6 June 2017
Verified Purchase
I loved this book, it is adventurous and sad. It is also happy. Now I know what those Nazis did to Jews and it was horrible. I love how Felix and Zelda never ever EVER give up. this is a must read for all 6th graders and above.
Read more
Helpful
Report abuse

Justin
5.0 out of 5 stars Once
Reviewed in Australia on 29 July 2020
Verified Purchase
Exciting sad and emotional story I loved the book and I loved to picture it in my head. And I liked the letter on the last page. You should read it
Read more
Helpful
Report abuse

DAVE Jarrott
5.0 out of 5 stars once
Reviewed in Australia on 13 October 2018
Verified Purchase
this was a great fictional book based on stuff that actully happened and it was sad at points butstill very very good so I gave it 5/5 stars
Read more
Helpful
Report abuse

Shorty
5.0 out of 5 stars Once
Reviewed in Australia on 22 November 2020
Verified Purchase
This is an amazing book I couldn’t put it down once I borrowed it( I got it a couple days ago and just finished reading it)
Read more
Helpful
Report abuse

Callie Harvey
5.0 out of 5 stars once
Reviewed in Australia on 27 June 2015
Verified Purchase
I loved this exciting sad and fantastic book. Kerry Greenwood really caputures you as you read this book. Also in the series is Now ,Then and After.
Read more
3 people found this helpful
Helpful
Report abuse
See all reviews

Cartwheeling Dragons
5.0 out of 5 stars Gives a understanding of war
Reviewed in the United Kingdom on 21 August 2018
Verified Purchase
I bought this for my son, but also read it myself. This is a good story told from the point of Felix who displays nativity to war and what is happening around him. It is the sort of book where you constantly yell NO DON'T DO IT.
There is something likable about Felix and I could feel myself willingly him to survive.
I learnt history as a bunch of facts, but this book gives an insight into what people really suffered. Yet, it does so in a way that a child can deal with. It has given me a greater understanding of history. . and I know my son understands history more than I did at his age.
I admit there were times I cried whilst I read it, but only as I felt so wrapped up in the book and the story. I felt for the children.
This book is suited for children 9-12 but I also think older children and adults could take a lot from this book.
Read more
7 people found this helpful
Report abuse

J. Field
5.0 out of 5 stars Harrowing
Reviewed in the United Kingdom on 27 October 2020
Verified Purchase
What can I say. I have gone on to read all the others in the series. The story is told through the eyes of a Jewish boy called Felix in Once is about 7 I think. He is first met in an orphanage in Nazi occupied Poland and we follow him on his journey to find his parents. I would let my 10 year old grandson read Once on the proviso that he talk about it with an adult. I personally feel the rest of the books are too harrowing for that age. I would wait until slightly older and more able to deal with the treatments of the Jews. The book was sensitivily written and at the end you are left wanting to know what happens to Felix.
Read more
Report abuse

King Mummy
5.0 out of 5 stars Recommended.
Reviewed in the United Kingdom on 12 July 2014
Verified Purchase
This is a wonderful story for children aged 9-12 - depending on maturity/reading ability. I have used it with my year 7 pupils, all of whom are boys and most have English as a second or third language. They have really enjoyed reading it and about a third of the class have, of their own volition, gone on to read the stores that follow: 'Then,' 'Now' and 'After.' Colleagues and some older students have found the narrator Felix 'irritatingly naive' but the Yr 7 students don't seem to mind. When I asked one of the more able Yr 7 readers about this he commented "Felix is like your little brother; you know he's getting it wrong but you're sort of glad he does because the reality is so bad and you don't want him to be scared. " Recommended.
Read more
10 people found this helpful
Report abuse

emmat34
5.0 out of 5 stars Gripping book
Reviewed in the United Kingdom on 3 August 2018
Verified Purchase
An excellent book - read it all in one go. Written from a child's point of view with all the naivety that a child brings. Very touching, sad, but doesn't glorify the horror - simple stating of the facts. A good read for 10-11yr olds.
Read more
3 people found this helpful
Report abuse

Vicki the Vixen
5.0 out of 5 stars Heartbreaking but wonderful
Reviewed in the United Kingdom on 11 September 2015
Verified Purchase
I asked my 8 year old son to give this a try, to try and encourage him to read beyond Wimpy Kid, Tom Gates etc, and he was gripped from the start and requested the other 3 books about Felix, which he devoured in a week. I read some of them and cried my eyes out - they are heartbreakingly sad and don't gloss over Second World War atrocities one bit. Yet they are suitable for, and gripping to, children. Quite a feat. Highly recommend, especially if your child is studying World War 2 at school.
Read more
6 people found this helpful
Report abuse
See all reviews
Back to top
Get to Know Us
Make Money with Us
Let Us Help You
And don't forget:
© 1996-2021, Amazon.com, Inc. or its affiliates