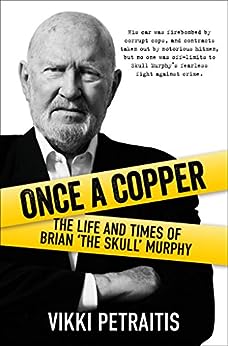 Once a Copper: The Life and Times of Brian ‘The Skull’ Murphy Kindle Edition

"This book captures the gritty reality of the life of Brian 'The Skull' Murphy, almost the last of the 'old school' coppers. The legend of 'The Skull' lives on in this unique book."
-Robin Bowles, award-winning true crime writer, Australia's True Crime Queen

"A very compelling insight into the [Victorian] Police Force of yesterday ... I kept thinking of what Winston Churchill said in the British Parliament: The opposition occupies the benches in front of you, but the enemy sits behind you.""
-Les Twentyman; National youth advocate

Vikki Petraitis has written over a dozen Australian true crime books. Her best-selling book about Frankston serial killer, Paul Denyer, remains a classic in the genre. Her focus on the human element of crime has earned her multiple awards and accolades, and she is in demand as a speaker and teacher of creative writing. Petraitis is currently undertaking a PhD in Creative Writing. --This text refers to the paperback edition.

Bmacca
5.0 out of 5 stars Scary things
Reviewed in Australia on 8 February 2021
Verified Purchase
This is a telling account of a copper who lived for his job. The fact he was opposed and oppressed and various points in his police service may come as a surprise to some readers, but recent history indicates many "coppers" have as much to fear from within coupled with dodgy politicians and insipid laws
Read more
Helpful
Report abuse

Liana
5.0 out of 5 stars Great Copper
Reviewed in Australia on 17 September 2020
Verified Purchase
Great read. He is a character only wish cops were more like him today.
Read more
One person found this helpful
Helpful
Report abuse

Brian P
4.0 out of 5 stars This is a true story
Reviewed in Australia on 22 August 2018
Verified Purchase
Great book I enjoyed
Read more
2 people found this helpful
Helpful
Report abuse

Elise McCune
5.0 out of 5 stars ‘Once a Copper’ a five star book.
Reviewed in Australia on 9 March 2018
I was fortunate to read a pre-publication copy of ‘Once a Copper’ the Life and Times of Brian ‘The Skull’ Murphy by Vikki Petraitis.

Brian ‘The Skull’ Murphy, is a long-retired police officer but journalists regularly beat a path to his door. Once known as Australia’s toughest cop, The Skull was both charged with manslaughter (and acquitted), then awarded a Valour Award for bravery in the line of duty.

A non-drinking, Catholic family man, Brian did not fit the accepted mould of a 1950’s police officer and he didn’t care. Over 40 men fell to his bullets, and more felt his fists.

Australia’s toughest cop, for the first time, shares a personal secret of sexual abuse, in the hope that it will help others. It was this abuse that made Brian the type of police officer he became: tough on the criminals but with empathy and a great feeling of protection towards the victims.

‘Once a Copper’ is an excellent book, written with the full co-operation of Brian Murphy, and well-researched by Vikki Petraitis, who is Australia’s foremost true-crime writer.
Read more
One person found this helpful
Helpful
Report abuse
See all reviews

Fruitbat
4.0 out of 5 stars It’s true !
Reviewed in the United States on 29 July 2019
Verified Purchase
Great read
Read more
Report abuse
See all reviews
Back to top
Get to Know Us
Make Money with Us
Let Us Help You
And don't forget:
© 1996-2021, Amazon.com, Inc. or its affiliates