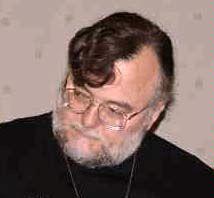 On the Oceans of Eternity (The Nantucket/Islands in the Sea of Time Series): 3 Audio CD – Unabridged, 1 March 2021

by S. M. Stirling (Author)
4.4 out of 5 stars 192 ratings
See all formats and editions
Sorry, there was a problem loading this page. Try again.

"This fun, intelligent series is perfect not only for action-adventure, alternate history, time travel, and military-SF fans but also for epic fantasy readers, for Burroughs and Haggard fans craving a modern update of the lost-civilization novel, and for anyone who loves Patrick O'Brian's sensational sea battles."

S. M. Stirling was born in France but is Canadian by origin and American by naturalization. Stirling is the author of numerous science fiction and fantasy novels, including the popular Nantucket series that began with Island in the Sea of Time and, more recently, Dies the Fire and The Protectors War.

4.4 out of 5 stars
4.4 out of 5
192 global ratings
How are ratings calculated?
To calculate the overall star rating and percentage breakdown by star, we don’t use a simple average. Instead, our system considers things like how recent a review is and if the reviewer bought the item on Amazon. It also analyses reviews to verify trustworthiness.

ruggedtoast
1.0 out of 5 stars What. The. Heck?
Reviewed in the United Kingdom on 21 January 2013
Verified Purchase
Books one and two of this series were bawdy, frenetic page turners. Bursting with vivacious inventiveness, bold characters, sweeping plot lines and impeccable realism. I was glued to the previous books as 20th Century Nantucket battled to preserve it's values and influence against the bronze age world.

What on earth happened here? Minor characters from the earlier books are endlessly and formulaically revisited, always in the same fashion. E.g someone is going somewhere, they aren't there, but they're going there. What can they see? What do they think about it? What else is going through their head? What can they see now, what do they think about that? What is the person next to them wearing, does it have pleats? On, and on, and on.

Little of it moves the exciting denouement of 'Against the Tide of Years' forward and by the time I had got 300 pages in I had basically forgotten what the point of any of it was and did something I hardly ever do with fiction books; I started scanning and skipping ahead. Just to see if anything, something, was actually going to happen.

Well the book ends, one gets the impression with the ending that Stirling had had about as much fun writing it as I found reading it and just wanted it over. There was little satisfaction for the reader who had tracked the travails of Marion Alston, William Walker et al over three books and expected a tumultuous climax.

Its been 12 years since this came out so I doubt there will be any more, in any case I dont think its a journey many readers would want to accompany him on now.
Read more
One person found this helpful
Report abuse

Ken
4.0 out of 5 stars Not the end?
Reviewed in the United Kingdom on 31 October 2008
Verified Purchase
I love this series, the first book is excellant and worth 5 stars, the second and third 4 stars as is inevitable in sequels where the idea and setting are already established and the wow factor missing.

There are clear indications to me that a further book or more could be written as there is the open ended sections regarding the crew of the lost airship, and the surviving daughter who intends to rebilud her fathers empire away form the sea where the nantucknians can't easily get to her?
the "Dies the fire" trilogy has spawned a follow up series based on the children of the main characters from the first series
Read more
Report abuse

Kevin Bulmer
5.0 out of 5 stars Top Notch Alt History
Reviewed in the United Kingdom on 2 March 2015
Verified Purchase
A tour de force by Stirling, one of the best alternative history series out. This is the last in the 3 book series. I had the paperback versions & decided I need the hardback as the others wore out.
Read more
Report abuse

Amazon Customer
3.0 out of 5 stars loses it in the final third
Reviewed in the United Kingdom on 16 February 2001
Verified Purchase
Not bad, but the poorest of the trilogy.Worth getting if you enjoyed the first three.
Too long, too many characters and too many situations. The whole west coast expedition should have been cut out and stuck in a novella like the Pern series does from time to time.
Started to skip pages towards the end as I was getting bored, but to be fair I had come on to it straight after reading the middle book.
Look for the tribute to Rorke's drift, its one of the best bits.
Finally,...stop criticising these books cause they dont fit your view of how people should live their lives. The writer does not 'shove lesbianism down your throats' any more than a writer whose main character is straight, would be shoving heterosexuality down your throats. The books show a fair representation of human frailties and actually serves to show the importance of community, integrity and family...
Read more
4 people found this helpful
Report abuse
See all reviews
Back to top
Get to Know Us
Make Money with Us
Let Us Help You
And don't forget:
© 1996-2021, Amazon.com, Inc. or its affiliates