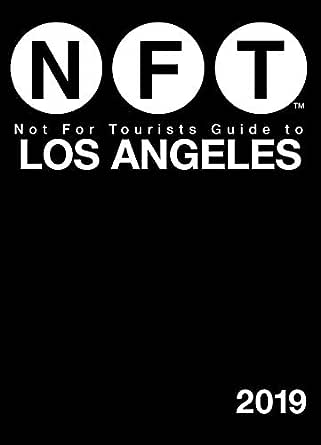 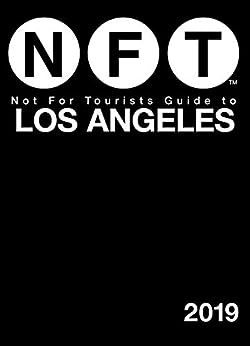 Not For Tourists Guide to Los Angeles 2019 Kindle Edition

“For people who don’t want to be seen carrying a guidebook.” —New York Times “A series of guides designed to make you feel like a local.” —CNN “This is one guidebook you won’t find in the fanny pack next to the wet wipes.” —Entertainment

“For people who don’t want to be seen carrying a guidebook.” —New York Times “A series of guides designed to make you feel like a local.” —CNN “This is one guidebook you won’t find in the fanny pack next to the wet wipes.” —Entertainment --This text refers to the paperback edition.

Not For Tourists (NFT) released their first book, a guide to Manhattan, in May of 2000. Today, NFT is an urban lifestyle brand that works closely with city and neighborhood editors in Boston, Chicago, London, Los Angeles, and New York. Their offices are in New York City. --This text refers to the paperback edition.

Marcus
1.0 out of 5 stars Really outdated information
Reviewed in the United States on 21 January 2019
Verified Purchase
I bought this to replace a 2016 edition. What a huge mistake. It's exactly the same book, as far as I can tell (and the 2016 edition wasn't exactly loaded with current information.

• The Americana at Brand (built in 2008) is not listed in the "Malls" section, despite being listed as one of the five best things to do in Glendale. (The Glendale Galleria, which is next door gets a full page).

• There's no listing in the sports stadium listings for the L.A. Memorial Coliseum, home of the USC Trojans and, for one more year, the Los Angeles Rams. (There is a listing for the area's other Pac-12 football stadium, The Rose Bowl, however).

• Dignity Health Sports Park (home of the L.A. Galaxy and L.A. Chargers) is listed as The Home Depot Center, a name it hasn't been called since 2013 (it's been the Stubhub Center in the interim).

• Among the listed tenants of "Home Depot Center" is Chivas USA, an MLS team that folded in 2014.

• There is no listing for Banc of California Stadium, which is the home of LAFC of the MLS.

• US Highway 101 has an Interstate shield on all the map pages, despite not being an interstate.

• NBC Studios is listed as being at Alameda and Bob Hope Way, a location NBC left in 2007. It's now home to Blizzard Arena.

• The Burbank Empire Center page lists something called "The Great Indoors" as a tenant, when it's been a Walmart for at least three years. Also, there's an REI where they list a "Sportsmart."

Those are the mistakes and omissions I've noticed in the five minutes since the book was delivered.

I'm not going to purchase any future editions, and I'd urge anyone reading this to do likewise.
Read more
27 people found this helpful
Report abuse

Craig
3.0 out of 5 stars It's a faintly disguised tourist guide
Reviewed in the United States on 26 February 2020
Verified Purchase
Still, after living here for many years I found things I didn't know about.
Read more
Report abuse
See all reviews
Get FREE delivery with Amazon Prime
Prime members enjoy FREE Delivery and exclusive access to movies, TV shows, music, Kindle e-books, Twitch Prime, and more.
> Get Started
Back to top
Get to Know Us
Make Money with Us
Let Us Help You
And don't forget:
© 1996-2020, Amazon.com, Inc. or its affiliates