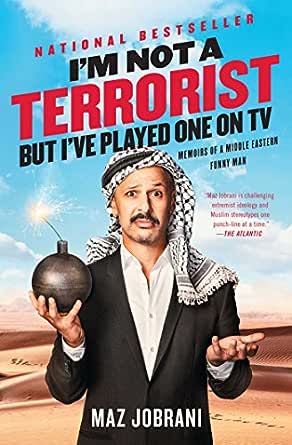 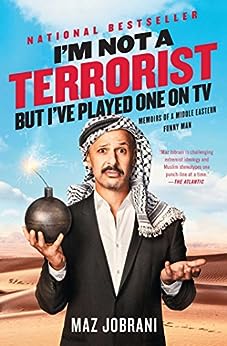 I'm Not a Terrorist, But I've Played One On TV: Memoirs of a Middle Eastern Funny Man Kindle Edition

“Jobrani has plenty to say about matters of race, assimilation, embarrassing family members, life in America for brown-skinned people before and after 9/11, the vagaries of international pop culture and making it in big, dumb, fizzy, sometimes beautiful America.” —The New York Times

“I didn’t even know Maz was Persian. I thought he was Mexican. You learn so much when someone writes a book about themselves. Now read it so you can understand why Maz is hands down my favorite bald headed, goateed, Persian comedian named Maz.” —Whitney Cummings, stand-up comedian and creator of Two Broke Girls

“I have witnessed hundreds of thousands of people come to my club, and adore Maz. I highly recommend this book. It’s an incredible story about an incredible comedian. You will love it!” —Jamie Masada, Owner, The World Famous Laugh Factory

“Maz Jobrani is no Jabroni. If you don't read his book I will find you, put you in a camel clutch, and break your neck! Oh, and his book is funny too.” —The Iron Sheik, WWE Champion and Social Media God

“A heartfelt and laugh-out-loud hilarious memoir about growing up an immigrant in America. Maz Jobrani is not just one of the funniest comics out there. He's a keenly perceptive voice on what it even means to be American.” — Reza Aslan, author of Zealot and No god but God

"The struggles and successes of ‘the Persian Eddie Murphy.’ Iranian-American comedian, actor and first-time author Jobrani tells a fish-out-of-water story. . . . A funny [and] insightful memoir" —Kirkus Reviews --This text refers to an out of print or unavailable edition of this title.

Maz Jobrani is a founding member of The Axis of Evil Comedy Tour. He performs stand-up comedy around the world, including in Europe, Australia, and the Middle East where he performed in front of the King of Jordan. He just released his third comedy special, “I Come In Peace,” which aired on Showtime and Netflix. Maz starred in the films Friday After Next, 13 Going on 30, and The Interpreter. --This text refers to an out of print or unavailable edition of this title.

I'm Not a Terrorist, but I've Played One on TV

Hello there! Thank you for picking up my book. Maybe you picked it up because you recognize me from a television show. “Isn’t that the guy from Better Off Ted and Knights of Prosperity and Life on a Stick? Whatever happened to those shows? What happens to actors when their shows get canceled?”

Well, reader, we write books. That’s what happens when our shows get canceled. Maybe you’ve picked up this book because you saw the word “terrorist” on the cover and thought: I always knew this guy was a terrorist! Always trying to convince the American public that he’s a stand-up comedian. What a dirty piece of scum! He was never that funny anyway! Or maybe you’re related to me, and you thought: What the hell—Maz wrote a book? I wonder if he mentions me. I better buy a copy and check it out.

Whatever the reason, thank you.

Writing a book isn’t easy. I’m a comedian, so I’m used to writing a few lines of comedy each day, but when I was faced with writing two hundred pages I was intimidated. I immediately began to think of ways to cheat. What if I double-spaced everything? Or maybe I could add a hundred pages of pictures. That would really help move this baby along.

However, once I began writing, it started to flow. After all, this is a story about my life. Who’s more qualified to write about me than me? I’ve been studying me for forty-two years. I’m an expert on me. I’ve got a Ph.D. in me. I wrote the book on me. Literally! And what a life it’s been! A classic immigrant story. A kid from the streets of Tehran moving to the streets of Los Angeles. (Which nowadays is packed with so many Iranians that it’s basically like living back on the streets of Tehran.) Along the way I’ve experienced a revolution, a hostage crisis, and male-pattern baldness.

Writing a book is like going through a therapy session. It’s amazing how much you forget about your past until you’re forced to sit at a desk and put it down on paper. If you want to go through therapy but can’t afford the payments, try writing a book. When you’ve got a busy life filled with work, family, car payments, Twitter feeds, and Facebook photos, you don’t have as much time to reflect on your past. But when you have an editor with deadlines, you’re forced to dig, and you find that you have stories to tell. Like the one about how I was made to wear a turban on a Chuck Norris movie of the week. Yes, I know, you’re jealous. Don’t hate—we can’t all be friends (or, in my case, enemies) with Chuck.

In imitation of the therapeutic process, I tell my story as I remember it. Some of the dialogue you will read wasn’t said word for word but what it actually sounded like when I heard it. My mother, whom you will read a lot about in this book, is a prime example. Anyone who has reflected on a parental relationship knows that when a mother says one thing, her kid can read a million other things into it. For example, when my mom would say, “Why can’t you go to medical school like Mina’s son?” I would hear “You’re a bum loser, and you’re a disgrace to our entire race! I never should have had you in the first place!” In fairness to my mom, she was no Joan Crawford from Mommie Dearest. She was always a loving mother who did what she thought was best. Sometimes that included hitting us with clothes hangers when we were young, but I’m sure we had it coming. To this day I have flashbacks when the dry cleaner asks me if I want my shirts folded or on hangers. I love my mom dearly, and thanks to her all my shirts now come home from the dry cleaner’s folded.

Since my life as a comedian involves so much traveling, you could call this a travel book as well. You will read about my experiences in bars in Lebanon with Christian Lebanese (yes, there’s alcohol in the Middle East, and Christians, too!). You will read about my visit to one of the Wonders of the World, Petra in Jordan, where not only did I see the historical city built thousands of years ago, but I was peddled Indiana Jones merchandise. American capitalism at its best! There’s also my trip to the White House, where President Obama groped my wife. You want scandal? I’ve got scandal! The point is, I’ve traveled a lot. You know you’re flying too much when you consistently hit more than a hundred thousand miles per year. I’ve gotten to know the shuttle bus drivers at the parking lot, the flight attendants, and even some sure-handed TSA agents. In fact, just the other day a TSA agent fist-bumped me as I went through the metal detector—that’s how close we’ve become. Since I’m of Middle Eastern descent, the first time a TSA agent recognized me I was worried she was profiling me. Turns out she was a fan of my stand-up and just wanted to say hello. As usual, I was the one profiling myself. Much more on that later in this book.

I hope you will enjoy reading about this Middle Eastern–American comedian’s life, because I’ve certainly enjoyed writing it. Once you read my story, I think you will see we have more in common than you anticipated when you picked up the book thinking you were grabbing the memoir of a terrorist. If you do finish the book and are still scared of me and people of my ilk, then I recommend you schedule an appointment with a therapist. Either that, or try writing your own book. --This text refers to an out of print or unavailable edition of this title.
Read more

4.5 out of 5 stars
4.5 out of 5
58 global ratings
How are ratings calculated?
To calculate the overall star rating and percentage breakdown by star, we don’t use a simple average. Instead, our system considers things like how recent a review is and if the reviewer bought the item on Amazon. It also analyses reviews to verify trustworthiness.

mrs. Faranak Peart
5.0 out of 5 stars I loved it and recommend this book
Reviewed in the United Kingdom on 14 August 2017
Verified Purchase
I loved it and recommend this book ;)
If you have been brought up in England, USA or any European countries with very traditional parents, then you will read your storeys at times!!!!
don't miss out on this book even if you are not Persian/Iranian. you'll love it and laugh loudly at times. <3 it

Ali T
4.0 out of 5 stars Great book. Really funny
Reviewed in Canada on 20 April 2016
Verified Purchase
Great book. Really funny. Loved the cultural jokes. The only thing we didn't like about it was that it had too much swearing and some adult humour.
Read more
Report abuse
See all reviews
Get FREE delivery with Amazon Prime
Prime members enjoy FREE Delivery and exclusive access to movies, TV shows, music, Kindle e-books, Twitch Prime, and more.
> Get Started
Back to top
Get to Know Us
Make Money with Us
Let Us Help You
And don't forget:
© 1996-2020, Amazon.com, Inc. or its affiliates