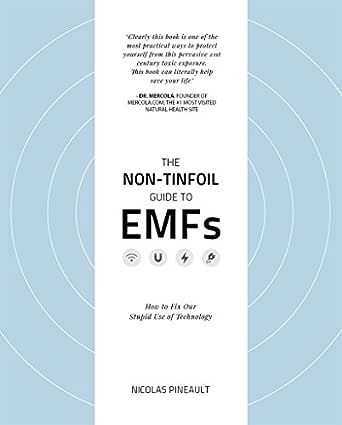 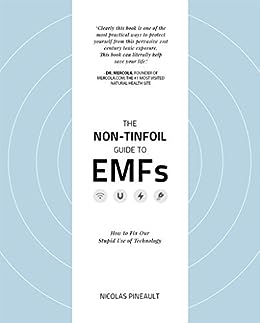 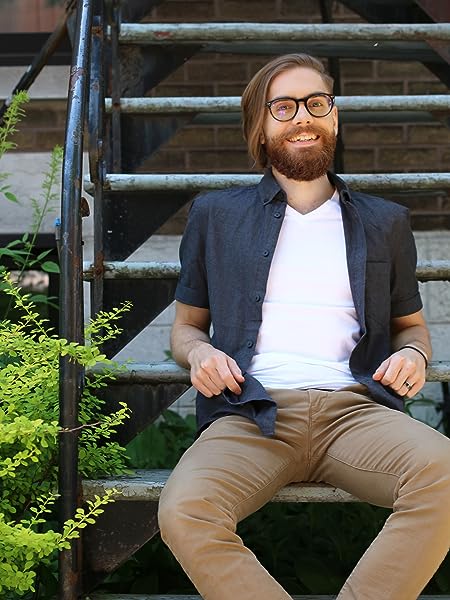 The Non-Tinfoil Guide to EMFs: How to Fix Our Stupid Use of Technology Kindle Edition

Nicolas Pineault is an investigative health journalist who has published more than 1,500 online articles through a daily newsletter called Nick & Gen's Healthy Life served to thousands of people in dozens of countries. In 2017, he authored The Non-Tinfoil Guide To EMFs - an unconventional book which combines common sense and humor to tackle the very serious topic of electromagnetic pollution and its effects on human health. His work has now been endorsed by the world's leaders in health including Dr. Joseph Mercola. --This text refers to the paperback edition.

4.7 out of 5 stars
4.7 out of 5
527 global ratings
How are ratings calculated?
To calculate the overall star rating and percentage breakdown by star, we don’t use a simple average. Instead, our system considers things like how recent a review is and if the reviewer bought the item on Amazon. It also analyses reviews to verify trustworthiness.

Paul Herrmann
5.0 out of 5 stars easy to understand
Reviewed in Australia on 29 January 2021
Verified Purchase
He makes a complex topic easy to understand and offers solutions that anyone can implement.
Read more
Helpful
Report abuse

Simon
5.0 out of 5 stars Excellent, approachable summary to this complex topic
Reviewed in Australia on 17 December 2019
This book is an excellent, approachable summary of the scientific studies surrounding EMF radiation and it’s affect on our health. The author does an excellent job of making it approachable to non-scientists (most of us) while presenting important ideas by those who have studied and researched the topic for decades. Helpful footnotes provide links to dig deeper.

It presents a balanced and well-rounded view that I rarely see presented – however one that is ultimately quite disturbing once all the facts are in.

I applaud the author’s fun, conversational style that gets the information across without getting too heavily bogged down in scientific jargon. It’s the kind of book I’d gladly recommend to friends and family, and considering the damaging effects of EMFs, this is something I will increasingly be doing.

Sabrina
5.0 out of 5 stars Easy to Read and Makes Sense.
Reviewed in Australia on 28 July 2019
I found this book relatively easy to read, though I admit I skipped over some of the more in-depth explanations. It also offers some guides to how to address the issue in your own environment. A good read all round and very useful.
Read more
Helpful
Report abuse

Alison K
5.0 out of 5 stars Great book!
Reviewed in Australia on 12 September 2019
Very informative and thorough. Covered everything I needed to know to understand EMF's and keep my family safe.
Read more
Helpful
Report abuse
See all reviews

Lynn
5.0 out of 5 stars Top notch informative book
Reviewed in the United Kingdom on 20 May 2018
Verified Purchase
This is an informative book written in a conversational, light-hearted approach which is welcome, given the subject matter. There are numerous references to the studies the author refers to, so you can check these out yourself. EMFs are something I've been concerned about for years. My house is fully wired up, no wi-fi, smart anything, no microwave etc. My only wireless device was a mouse but I've now gone wired on that too after I saw a Youtube video demonstrating the radiation coming off a wireless mouse with an acoustimeter. I've gone wired both at home and at work.

The only part of the book that was missing for me was any nutrients recommended to protect against EMF exposure because they do exist, magnesium being one of them. Ironically, the book has an endorsement by Dr Joseph Mercola and Mercola has his own website with many recommendations for a nutrient approach.
Read more
38 people found this helpful
Report abuse

Catherine
3.0 out of 5 stars The Non-academic Guide to EMFs
Reviewed in the United Kingdom on 25 November 2018
Verified Purchase
Three stars awarded to the author for raising public awareness re the possible dangers to health of uncontrolled electro magnetic fields. No stars awarded for doing so in a rambling and unprofessional way. The jokey, matey tone may appeal to some but the wordage requires substantial editing throughout and detracts from what is presumably intended as an important message: to inform about EMF dangers to health. To be taken seriously as an investigative journalist, the references, for example, should be exact and links should lead directly to the precise information being cited in support of an argument, not just the title of e.g, a newspaper, leaving the reader to find it somewhere. Other referencing does not lead to anything at all but it looks impressive and scholarly to have a long reference list. The analogy with the health impact of smoking is useful, considering the fact that doctors used to recommend cigarettes before the link with cancer was finally proven. The ‘profit before health’ motif is certainly valid, and is nothing new. It relies on general public ignorance and in this case in our love affair with our new technological toys, on which we have all become reliant. This is not to cast doubt on the dangers of emfs and ‘smart’ technology, but there have been and always will be those who bask in the achievements of others to make a buck or two. The impression here is that the book is more about author promotion than the subject matter, A scholarly investigation into the topic it is not.
Read more
27 people found this helpful
Report abuse

Sarah Foster
5.0 out of 5 stars Buy it now, this book could save your life, sleep and sanity!
Reviewed in the United Kingdom on 4 June 2018
Verified Purchase
The book that EVERYONE should have and read!!! Incredibly well researched, easy to read and eye opening. I bought it first on kindle and then bought the hard copy version for my husband to read. I will be buying more for friends and family. Since reading the book we've has a building biologist assess our house, taken the house off wifi, installed dirty electricity filters, wear blue blocking glasses, sleep on earthing sheets and I work with my feet on an earthing mat. HUGE DIFFERENCES! The most important book I've read for years.
Read more
31 people found this helpful
Report abuse

Robert
1.0 out of 5 stars Inaccurate with lazy, terrible use of citations
Reviewed in the United States on 8 May 2019
Verified Purchase
As someone with a degree in Electrical Engineering who specializes in Electromagnetic radiation, I can say that there are some fundamental flaws with this book. For one, his presentation of electromagnetic waves is inaccurate. More alarming is his terrible use of footnotes, throwing in baseless claims which he passes off as citations, and then citing them with broken links or the home page of a blog with hundreds of pages.

He seperates EM waves into "RF", "Magnetic", "Electric", and "Dirty Electricity". In reality, RF just means EM waves in a range of frequency, DE means EM waves in a range of frequencies, and Magnetic/Electric are two components of EM waves. Further, he usually doesn't specify the frequencies for the power density, electric fields, or magnetic fields being discussed. It would have been more accurate to classify EM fields into different frequencies and their power density, magnetic field, and electric field.

What bothered me more was his lazy and reckless use of citations. He would often make bold, baseless claims, and then give them a citation as if they a scientific fact. Then, when you click on the citation, you get a broken link, or a random blog url. If you'd want to check his sources for his claims, you'd have to hope the blog is still online, and then sort through hundreds of articles hoping that you can find the claim he's flogging.

Here is an example:
"We are exposed to a lot of EMF radiation from man-made sources -- at levels some say are approximately 10 billion times higher than back in the 1960s[30]"

When you click on the citation, what you get is:
"olgasheean.com, page 5"

If you go to olgasheean.com, there is no "page 5". It is a website with different sections of articles, and no way of easily finding the above claim.

This is very important for a number of reasons. This book is meant as an introduction to what looks to be a very serious issue that many people are skeptical about by default. By failing to properly cite some of his more outrageous claims, or by mixing in third hand testimony from questionable sources, it damages his credibility. It's like saying "aliens killed Kennedy", and then putting the source for this claim as "google.com". Most people are going to roll their eyes and take whatever he says with a grain of salt.

If he really cares about spreading positive awareness on this issue instead of adding to the flames of skepticism, he needs to take his book more seriously. The citations should be link specifically to individual pages (or works, talks, etc) where his claims are clearly visible. They should be properly formatted so someone looking to review them don't have to go on wild goose chases to find them. If he cannot, he should remove them. He should also gain a better understanding of EM waves, as misrepresenting them just makes him look like he doesn't know what he's talking about.

There are some aspects of the book which are good, including the chapter with a list of studies on the topic of EM. But until the author takes his presentation of this topic seriously, I fear this book will do more harm than good on the subject of EM-related health effect awareness.
Read more
452 people found this helpful
Report abuse

Si
5.0 out of 5 stars The Best Single Volume Book on EMF's
Reviewed in the United Kingdom on 6 November 2018
Verified Purchase
EMF's pose a risk to everyone, yet most people know nothing about it. This book gives a good A-Z of the subject, the authors work is well balanced, research backed, not too heavy but detailed where it counts and written in a humorous style which is just what this subject needs. Perhaps a note on nutritional support, for example iodine rich foods (e.g. kelp) and magnesium would be a helpful addition. However, still a great book. This is also the best book to buy for someone who needs to know all the key facts but can't commit to reading volumes on the subject. If you only buy one book on the subject then this is a very good choice.
Read more
10 people found this helpful
Report abuse
See all reviews
Back to top
Get to Know Us
Make Money with Us
Let Us Help You
And don't forget:
© 1996-2021, Amazon.com, Inc. or its affiliates