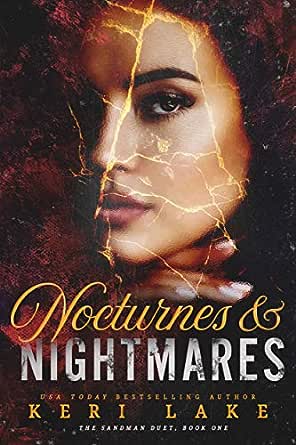 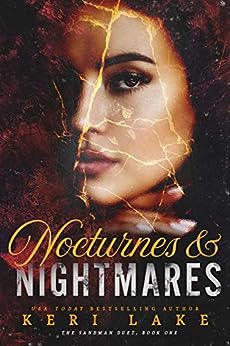 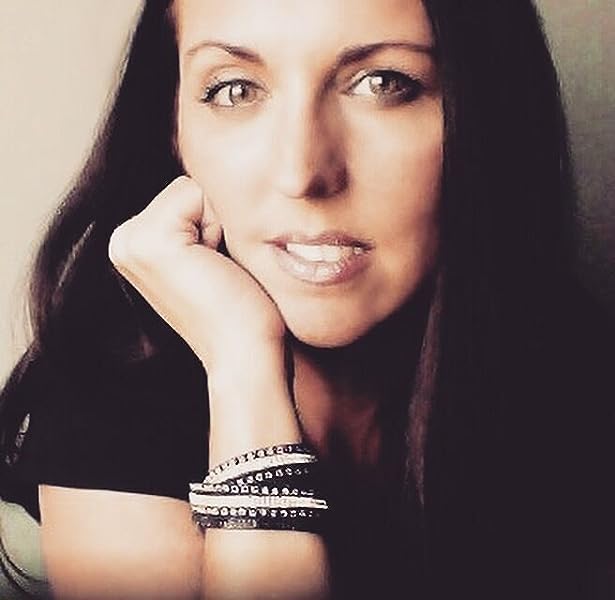 Sim H
5.0 out of 5 stars 🤯🤯😍
Reviewed in Australia on 26 April 2020
Damn ok. I could not put this book down. It keeps you guessing who the sick twisted Sandman is. I really feel for Nola & Oliver. Denny was such a pighead... I don’t think he deserved what happened to him but still I wish Nola would’ve kicked his butt sooner. Voss is such and enigmatic character...there was some bits that left me unsure about him, but I guess this is where Keri Lake deserves the credit. She creates this world where the reader can get lost in the suspense and thrill of Voss’s specific likes, Nola’s deep dark desires... and obviously the mind of a psychotic guy. I’ll admit, every time I did get in my car I always checked my back seat tho 😂😂🙊
Read more
Helpful
Report abuse

Anita_booktoread.
TOP 500 REVIEWER
5.0 out of 5 stars Suspenseful, well written, loved every minute!
Reviewed in Australia on 29 April 2019
Keri sets the background fast for this Duet and I’m not sure if this becomes fortunate or unfortunate because this then adds to the mystery surrounding the serial killer. As the story moves along we get to see the world from Nola, Voss and The Sandman’s POV, which adds an interesting dynamic to the story. Add in a few shady sideline characters and you’re left wondering who the killer actually is. Is it the really dodgy good guy? The boss who holds a torch? Or someone else whose watching and setting everything up?
Read more
Helpful
Report abuse

karlie lindsay
5.0 out of 5 stars 💥😀
Reviewed in Australia on 7 May 2019
I absolutely loved this duet,the first one is a slow burn,but this one there is no stuffing around,your straight into it on the first page,and it keeps you gripping till the very end,I loved boss and nola,I could easier read more of them
Read more
Helpful
Report abuse
See all reviews

RelentlessEliza
5.0 out of 5 stars 4.5 "Spine-tingling" Stars
Reviewed in the United Kingdom on 30 April 2019
Verified Purchase
Nola Tensley is a single mother who has been knocked to her knees by the experiences she has faced in life. It’s to her testament, and the fierce love for her son, that rises to feet to fight tooth and nail for as best of a life as she can give him.

Money as always is tight but to help ease the burden she has advertised for a lodger to reside in the annex to the back of her home. By nature she is a pessimist but her cup runneth over when she finds a lodger who is eager and willing to pay over her original asking price.

Her out of place, somewhat rude and reclusive lodger is Rhett Voss. He’s dark and sleek and she can’t seem to shake off the something being amiss with him. He reeks of money and luxury, but her instincts are correct when it comes to whiff of danger that hangs in heavy plumes around him.

As readers we are introduced to the man behind the mask with Voss. We know Nola should heed her reservations about him, but yet, knowing his reasons for being there change the game completely. In honesty I didn’t second guess my ease in thinking of him as a dark hero. He’s admittedly frightening, but I must say I shivered for all the wrong reasons. The story is a perfect balance of danger, exhilaration and fear, wound together tightly with tension that is set to break in spectacular fashion.

Keri Lake is an author whose stories come off the page and play like a reel in the mind. The words fall away with the images she conjures, and the hair-raising sense of anticipation that starts as a prick soon turn into full blown shudders that race down your spine.

Kindle Customer
5.0 out of 5 stars The Sandman is coming...
Reviewed in the United States on 5 May 2019
Verified Purchase
His past will determine her future, unless he can win the game.

Rhett Voss doesn't lose, he learned at an early age the consequences of losing and has no intention of entertaining the emotions as an adult. He doesn't hurt, he doesn't love...he's been hardened into what those consequences forced on him and now he's become the secretive, sadistic, most sought-after assassin for the organization known as The Gallows. Why? Because Voss doesn't fail, Voss doesn't lose.

Nola Tensley's life is colored with tragedy and loss, some would say crippling loss, but Nola is a fighter and a survivor and she has Oliver, her young son. Struggling to provide Oliver with something close to normal, after their devastating loss, life has other intentions for this mother and son as the demons from Voss' past come creeping into Nola's present and suddenly, unbeknownst to her, the game is on.

This is book 1 of The Sandman Duet. The story is intricately woven with an off the charts creep factor, as we not only get the view from inside the heads of our two MCs but also the Sandman. The crazed serial killer has set his sights on Nola and now Voss has to play his game in order to keep Nola safe.

For Voss...failure is not an option.

This one will leave you dangling a bit over the edge as you turn the last page, but fear not, I understand we don't have long to wait to find out what happens next. If psychological thrillers with a side of romance are your jam, you don't want to miss this one.
Read more
4 people found this helpful
Report abuse

Nola is a struggling single mom whose husband was brutally murdered. She rents a room above her garage to Voss, a sexy stranger, to help cover her monthly living expenses. She’s unaware that she’s landed on a killer’s radar.

Book one ends with a number of secrets still remaining. There’s a psycho murderer on the loose. I’m a little anxious to find out what Oliver saw the night his father was murdered. I think I know the identity of The Sandman, and I can’t wait to see if I’m right. Nola and Voss are both great characters, each with troubled pasts, and I’m thoroughly enjoying this Duet so far. Can’t wait to see how everything plays out.
Read more
One person found this helpful
Report abuse

Chaotic Cate
5.0 out of 5 stars Hooked From The Get Go
Reviewed in the United States on 18 August 2019
Verified Purchase
Wow, this one's going to be hard to review just for the simple reason that I was so hooked I stayed up all night and read both books back to back and suffice it to say a LOT happens in the course of that time. For a first time try at suspense and thriller the author really did a good job and had me massively roped in.

The story takes place in Chicago with a young mother, Nola Tensley, trying to raise her recently traumatized son who has gone mute after watching his father die. Nola is struggling to make ends meet both by working as a waitress in a diner and working to try and break through to her son and get him to communicate. When strapped for cash, she decides to rent the apartment over the garage and that's when Rhett Voss enters the picture. He's obviously white collar rich, Wolf of Wall Street, so to speak, and Nola for the life of her cannot figure out why he wants to rent her shoddy little studio and is adamant upon offering an ungodly sum of money to entice her to give it to him. But Rhett isn't just there for the intentions he says he is and his job is way removed from Wall Street. Rhett has a deeply completely f*cked up past and after having received a taunting and deadly message in New York from a ghost he'd long thought he put to rest in Chicago years ago, he's back to take on the challenge and stop the past from repeating. That past has put Nola Tensley in the crossfire and for the first book she is blissfully unaware.

There is also the issue of the serial killer, The Sandman who has been abducting young socialite type girls from clubs and doing macabre twisted things to them before leaving them to be found with his signature touch. This all ties back to the message Rhett received at the beginning and the very reason he is literally planted in Nola's backyard.

Nocturnes and Nightmares was a romance where the mystery/thriller/suspense came first and foremost and the romance was a slow burn that organically evolved over the course of the book. When Rhett and Nola were finally together it was hot and steamy. This is a dominant man with a very dark side and kink to him which he held back a little with on Nola. But if he's the predator then she's definitely still his prey no matter how much he restrains his true sexual desires. The whole book revolved around 3 POV's - Nola's, Rhett's and The Sandman's. Reading the Sandman's chapters was not only creepy and sadistic, it was also completely cray cray. This is one master manipulator and one sadistic son of a bitch. The book ends of course on a cliffhanger, not so much for where Rhett and Nola are at that point but definitely with the Sandman's last thoughts. One knows these 3 are going to end up coming head to head and the idea is absolutely appalling and terrifying. It left me one the edge of my seat and completely unable to do anything but jump to book 2 because I was so hooked.

Absolute hit out of the ballpark for an author's first try and thriller/suspense and I loved it all 5 stars and back again!
Read more
Report abuse

Amazon Customer
3.0 out of 5 stars Good book, not as great as some of the others
Reviewed in the United States on 17 September 2020
Verified Purchase
After reading the description and all the reviews, I was prepared for a pretty raunchy, intense book. I was not disappointed. My biggest complaints are really that a) it's really predictable and b) kind of over the top violent. I'm okay-ish with predictable - sometimes you need some "comfort food" when it comes to books.

I didn't so much have a problem with the intense sex or some of hallmarks. However, my imagination can fill in for a LOT, so I didn't feel I needed as many graphic descriptions of mutilation and rape. One or two in order to highlight the villains' perversions is okay (though may be a little triggering to some), but it became difficult to focus on the story and get through the book after a while because it was so frequent it became a distraction.

I had the same challenge with book two as well. Oh, also, both contain several spelling and apostrophe errors. Not awful, but somewhat distracting.
Read more
Report abuse
See all reviews
Back to top
Get to Know Us
Make Money with Us
Let Us Help You
And don't forget:
© 1996-2021, Amazon.com, Inc. or its affiliates