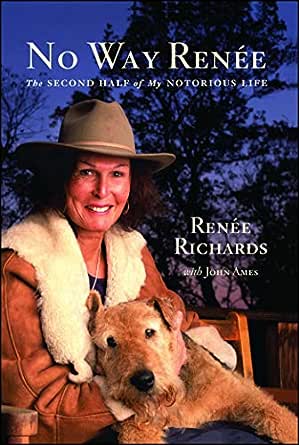 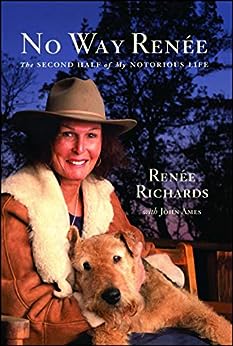 No Way Renee: The Second Half of My Notorious Life Kindle Edition

In 1975, at the age of forty, Richard Raskind, a renowned eye surgeon and highly ranked amateur tennis player, "died," and Renée Richards was "born," in what was to become the most public and highly scrutinized sex reassignment to date. It was not until Renée Richards was discovered playing in an amateur tennis tournament that the world took notice. Extensive media coverage and criticism thrust Renée reluctantly into the spotlight, sparking an intense public debate over her private life. Now, at seventy-two, Richards looks back and speaks frankly about all aspects of her complicated and often notorious life in this eye-opening, thought-provoking memoir.

Richards' honest and compelling narrative explores the dichotomy between the successful life she lived as Dr. Richard Raskind, who seemed to have everything (devoted friends, a beautiful wife and son, a stellar record of academic and professional achievement, and outstanding athletic ability), and a secret life of struggle with a drive that could not be suppressed, even by years of psychotherapy and the force of a considerable will.

Richards takes readers through her difficult decision to undergo surgery and the complex mixture of relief and continued frustration that came with the realization of her new identity. Discussing life after her transformation, Richards candidly relates the details, trials, and pleasures of her romantic life as well as fascinating stories about her tennis career, including her experiences as Martina Navratilova's coach. She also provides an intimate account of her difficult but rewarding relationship with her rebellious son: runaway teenager, high-stakes Vegas gambler, karate champion, and entrepreneur. She describes the deterioration of a once-loving marriage and the challenges of reclaiming her place at the forefront of her demanding medical specialty.
Having lived as a woman almost as long as she lived as a man, Richards draws on a personal history that illuminates thirty years of remarkable change in society's attitude toward gender issues. Her absorbing and inspiring story, at once heartbreaking and uplifting, is a testimony to how far we have progressed in our ability to discuss and accept sexuality in all its iterations, as well as a reminder of how far we still must travel.

Renee Richards is a successful physician and champion tennis player. Born in 1934 as Richard Raskind, Richards was thrust into the international spotlight by the disclosure of her sex reassignment surgery after she won a women's tennis tournament. She is a graduate of Yale and the University of Rochester School of Medicine, an Eastern Tennis Hall of Fame inductee, and the author of Second Serve: The Renée Richards Story. She lives in New York State.

John Ames is an educator and writer whose published work includes Second Serve: The Renée Richards Story and Speaking of Florida. He received his M.A. from the University of Florida, where he was a Ford Fellow. He lives in Gainesville, Florida, where he spent more than thirty years as an English instructor at Santa Fe Community College.
click to open popover

Babs
5.0 out of 5 stars Well Writteb
Reviewed in the United States on 20 August 2018
Verified Purchase
This is the life story of Renee Richards who was born male and became female. Her tennis career is a big part of this book as is her relationship with her family. I have not read her first book but I certainly will. This is an honest well written book.
Read more
Helpful
Sending feedback...
Thank you for your feedback.
Sorry, we failed to record your vote. Please try again
Report abuse

DFNYC
5.0 out of 5 stars You rock, Dr. Richards.
Reviewed in the United States on 10 December 2016
Verified Purchase
She's so smart, so brave, and a lot more fun than you'd imagine a trans woman of that era to have been.
Read more
Helpful
Sending feedback...
Thank you for your feedback.
Sorry, we failed to record your vote. Please try again
Report abuse

Samuel Rafael
2.0 out of 5 stars Bloated, overpriced, self-serving and superficial
Reviewed in the United States on 8 April 2010
Verified Purchase
A couple of comments. First, although I enjoyed her first book, "Second Serve" very much, I found this one to be a bloated, overpriced, self-serving and superficial attempt at avoiding any real depth about the major interest people have about her, that she is a transsexual. Famous surgeon, male tennis pro turned female tennis pro, tennis coach, whichever, it's still the frank gender stuff that carries the major interest. Although this was present in her first book, it is mostly absent in this one. This could have been more correctly titled, "No Way Renee: The second and mostly boring half of my notorious life." In addition, given that the author is a noted opthomologist, it would have been thoughtful for her to have enabled the text-to-speech feature in Kindle for those who are either visually impaired or just want to listen on a Kindle while driving or walking.
Read more
4 people found this helpful
Helpful
Sending feedback...
Thank you for your feedback.
Sorry, we failed to record your vote. Please try again
Report abuse

Linda Licata
5.0 out of 5 stars GREAT BOOK
Reviewed in the United States on 21 February 2014
Verified Purchase
I READ SECOND SERVE, THIS IS A SEQUEL TO IT. SHE CONTINUES WITH HER TENNIS DAYS. SHE HAS A GREAT SENSE OF HUMOR IN HER BOOKS. BEST IS TO READ SECOND SERVE FIRST.
Read more
Helpful
Sending feedback...
Thank you for your feedback.
Sorry, we failed to record your vote. Please try again
Report abuse
Load more international reviews

She told us, only the things she wants but nothing more.

It' s very politically correct, but the book is not useful to understand the complex life of transgender people, and the real changement of roles, habits, and so on..that was I aspect from a person who lived 40 years as man and 30 as women.

Servullo
4.0 out of 5 stars No Way Renee
Reviewed in the United States on 4 March 2012
Verified Purchase
I got very impressed with Renee Richards, her personality, her bravery.
I think to myself: What leads a person to do such sort of things?