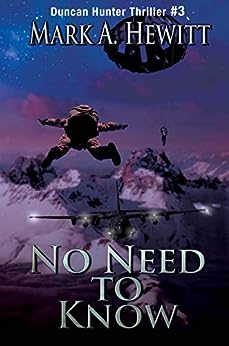 From an award-winning author, Mark. A Hewitt, praise for Duncan Hunter Thrillers:

"...a high-octane thriller that explodes off of the starter blocks and races top speed to the final scene." -Authors Reading on Blown Cover

"Duncan Hunter is a great character... an excellent read." -A Good Thriller on Special Access

"A great techno-thriller, part of a series, but standalone so you don't have to have read every preceding volume to follow the action." -Pat Ingram Reviews, on Shoot Down

"Mark A. Hewitt has established himself as a great author." -James J. Seals, Jr. on No Need to Know

"Mark A. Hewitt nails his fascination with spyplanes and the intelligence community's development and use of aircraft." -The International Spy Museum at L'Enfant

Mark A. Hewitt is a retired aviation executive, college professor, and military pilot. The ideas for his books spring from life experiences, his extensive international travel, and an admiration for the unique "quiet" spyplanes from the Vietnam War. He holds a master's degree in National Security and Strategic Studies from the Naval War College and an MBA from Embry-Riddle Aeronautical University. His novels have been approved by the CIA's Publication Review Board. --This text refers to the paperback edition.

4.4 out of 5 stars
4.4 out of 5
53 global ratings
How are ratings calculated?
To calculate the overall star rating and percentage breakdown by star, we don’t use a simple average. Instead, our system considers things like how recent a review is and if the reviewer bought the item on Amazon. It also analyses reviews to verify trustworthiness.

Todd Simpson
TOP 500 REVIEWER
5.0 out of 5 stars Excellent Book
Reviewed in Australia on 2 February 2016
There is so much to like about this book. Mark Hewitt really knows how to write an Action Thriller. As with his first two books this one has a well-developed plot, with plenty of surprises. I love the characters Duncan Hunter & Bill McGee, and what they go through trying to stop al-Qaeda. Once again the Author has hit the mark with this book, incredibly well written. Read it, you won’t regret it.
Read more
Helpful
Report abuse
See all reviews

MGB77
5.0 out of 5 stars The Princess of the Night becomes the Phoenix as she rises from the ashes in the Algerian desert to once more take to the skies
Reviewed in the United States on 2 November 2015
Verified Purchase
In this third novel by author Mark A. Hewitt, Duncan Hunter is once more airborne in a YO-3A quiet airplane outfitted to fly the Noble Savage and Wraith missions. The two special access programs, managed by the new DCI, Duncan’s former partner and now boss, Greg Lynche, continue to target the leadership of international terror networks around the world and Columbian drug cartels. Sometimes alone, other times with former Navy Seal Bill McGee in the rear seat, Duncan interdicts Somalian pirates in Somalia, Boko Haram in Nigeria and the Columbian drug cartels.

During the course of several missions Hunter - driven by his underlying moral philosophy codified by Edmund Burke’s maxim “the only thing necessary for the triumph of evil is for good men to do nothing” - chooses to break Allen Dulles’ 73 Rules of Spycraft by ignoring mission protocols acting outside the security requirements inherent in those same protocols.

Hunter is unaware that his old nemesis, the former DCI Bruce Rothwell, has survived the explosion orchestrated by Hunter and McGee. Broken in body, driven insane by his hatred of Hunter, Rothwell has sworn vengeance against Hunter. As the titular head of an alliance of convenience between the Muslim Brotherhood in Egypt and al-Qaeda, Rothwell commands an international network of radical Islamic terrorists that he activates to execute a plan to flush Hunter out into the open. To convince the members of the alliance of the rightness of his need for vengeance, Rothwell dangles the promise of refilling the alliance’s depleted financial coffers to include a mix of airline hijackings and repatriation Russian art and gold stolen by the Nazis. The price to the Russians to regain the lost art and gold, are suit-case size thermonuclear weapons to be transferred to the alliance.

As Rothwell stalks Hunter across the globe, his choice to break the 73 Rules, by executing a daring rescue of a Rothwell hijacked airline and sending the Princess of the Night to die, like the Phoenix in flames, on a suicide mission against an Iranian nuclear facility. Hunter’s actions play into Rothwell’s hand. The cat and mouse game climaxes in Amman Jordon when Duncan breaks cover to join Nazy in Amman. Rothwell captures Hunter, who finds himself staring into the face of his own mortality.

This third novel continues to develop the theme of the first two, “what’s past is prologue” tying historical events to current geopolitical threats from rogue nation states and violent non-state actors. It also changes the calculous of the earlier novels – that is, in No Need to Know, sometimes the dragon almost wins. This novel contains the twists and turns of the author’s first two novels with added uncertainty who is really friend or foe. The reader is drawn into the intricate world of spy craft where reality is not what is seems. Ready for another ride? Don the Nomex, strap on the Colt Python, shoulder the HALO rig, grab the tail of the Phoenix and try not to get burned.
Read more
4 people found this helpful
Report abuse

Dragon77
5.0 out of 5 stars Third installment. All the superlatives apply. Amazing page turner from start to finish!
Reviewed in the United States on 4 September 2015
Verified Purchase
Been waiting for book #3. Nonstop action. Wildly diverse and complex plot—easy to follow all of the characters. No Need to Know never stops as Duncan Hunter escapes one assassination attempt after another between counterterrorism missions. Parts of this book could be all too real. The idea that terrorists are operating here in America and the government is doing little about it is unsettling.
You only get a hint of the excitement and mayhem that comes. The race to see if Hunter and his friends can accomplish incredibly complex “pop-up” missions makes for a real page-turner. There is so much in Hewitt’s books, no other book out there captures the feel and excitement of counterterrorism work. The Hunter character is more interesting and compelling in this volume. To see how he manipulates his friends and acquaintances to get what he wants or thinks should be “the right thing to do” only to have them backfire—and then still be able to deliver the unthinkable—has made him one of my all-time favorite characters. Author Hewitt is for real. Bring on the next one.
Read more
One person found this helpful
Report abuse

Nate
4.0 out of 5 stars Inside information inherent
Reviewed in the United States on 6 April 2021
Verified Purchase
While no one person could get all that done it was a good ride. Now to the author, with all that good aircraft info why , seriously why did you install a safety not just in this book but another on that GLOCK because on the available models there is only the one on the trigger and the drop safety . Learn that. Yeah 800 was missiled , 737!beeline crew watched it happen.
Read more
Report abuse

traveler
5.0 out of 5 stars Another superb read from Mark
Reviewed in the United States on 9 May 2020
Verified Purchase
How does he do it? Please read all previous books prior to this one. Mark’s characters are the kind you would like to know in the real world (well not the villains though) Nice plot, what I call a “chewy” book. Lots going on to keep you reading later than you should.
Read more
Report abuse

atabarac
5.0 out of 5 stars LOVED IT!!
Reviewed in the United States on 3 November 2016
Verified Purchase
Loved it, loved it, loved it! Mark Hewitt is my new favorite author! I have to say, I did not want this book to end. That's a true compliment! Great plot, lots of intrigue, love Duncan and Nazy. PLEASE WRITE MORE!!!!
Read more
2 people found this helpful
Report abuse
See all reviews
Back to top
Get to Know Us
Make Money with Us
Let Us Help You
And don't forget:
© 1996-2021, Amazon.com, Inc. or its affiliates