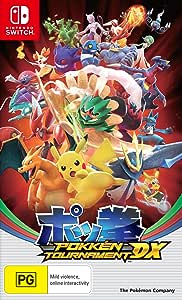 Pokkén Tournament has been announced for the Wii U. You can bring home the fun of the exciting Pokémon arcade fighting game.

Pokkén Tournament DX is a one-on-one Pokémon fighting game exclusively for Nintendo Switch. It's the first Pokémon title on Nintendo Switch, too. You need only one Nintendo Switch to go head to head with a friend-share a Joy-Con and enjoy battling easily anytime. You can also bring two Nintendo Switch consoles close together for local battles!

Pokkén Tournament DX includes a lot of new great new features, including new battle modes, so even those who have been playing the original Pokkén Tournament will enjoy the new fighting experience on Nintendo Switch. Also, in the Wii U version, there were some Pokémon that became usable as you progressed through the game, but in Pokkén Tournament DX, all Pokémon will be available for use from the start.

Jeremy
2.0 out of 5 stars Not bad, not great.. Definitely not worth $70!
Reviewed in Australia on 29 August 2018
Verified Purchase
Not many characters to choose from. It would have been an awesome game if they had all original 151 Pokemon and you could unlock evolutions as you levelled-up specific Pokemon.

I'd wait for a sale, and only if you're a die-hard Tekken and Pokemon fan, otherwise I'd look elsewhere.
Read more
2 people found this helpful
Helpful
Report abuse

Agnes Lee
1.0 out of 5 stars Preowned
Reviewed in Australia on 14 November 2019
Verified Purchase
Good game but I received a preowned goods. It did not come sealed and there are many scratches on the case. Sucks that I paid good amount for a second hand product. Could have write somewhere in the description and I'll get it from catch.com.au at the same price but new.
Read more
Helpful
Report abuse

Amazon Customer
5.0 out of 5 stars Fun for destroying the whole family
Reviewed in Australia on 6 September 2018
Verified Purchase
Controls are easy to learn hard to master. Just like all fighting games, smashing the controller can still beat the opponent if you're a fast pokemon. Still a great game to have for when you have friends over.
Read more
Helpful
Report abuse

DOUGSTAR65
4.0 out of 5 stars MY BOYS LOVE IT
Reviewed in Australia on 17 July 2019
Verified Purchase
MY BOYS LOVE IT. 1 OR 2 PLAYER GAME FOR NINTENDO SWITCH.
BEST PRICE ON AMAZON!!!
Read more
One person found this helpful
Helpful
Report abuse

Sirius
1.0 out of 5 stars Second hand game
Reviewed in Australia on 3 December 2019
Verified Purchase
Disappointed that the game is opened.
Read more
Helpful
Report abuse
See all reviews
Get FREE delivery with Amazon Prime
Prime members enjoy FREE Delivery and exclusive access to movies, TV shows, music, Kindle e-books, Twitch Prime, and more.
> Get Started
Back to top
Get to Know Us
Make Money with Us
Let Us Help You
And don't forget:
© 1996-2020, Amazon.com, Inc. or its affiliates