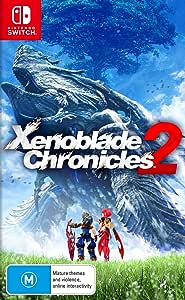 Brand: Nintendo
Platform : Nintendo Switch
4.1 out of 5 stars 25 ratings
Currently unavailable.
We don't know when or if this item will be back in stock.

As the giant beasts march toward death, the last hope is a scavenger named Rex—and Pyra, a living weapon known as a Blade. Can you find the fabled paradise she calls home? Command a group of Blades and lead them to countless strategic victories before the world ends.

Search for the ultimate paradise, Elysium, with your companion, Pyra.

In an endless white sea of clouds, there stands the World Tree. Around it lies Alrest, a land that many call home. Long ago, the people of this world lived atop the World Tree together with their creator, the Architect. The land they lived in was a true paradise, and its sweet rain and golden sunshine brought forth abundant harvests. The people called this land Elysium. But one day, the people were banished from this paradise. Did they anger their creator, or could there have been some other reason? No one knows. The world’s people took refuge below, but life was hard there and they began to die out. Just as all hope was almost gone, the Architect sent his servants, the Titans, to save humanity.

Jacob
4.0 out of 5 stars Massive jrpg for xeno fans
Reviewed in Australia on 30 January 2019
Verified Purchase
The game is better than the original and I picked it up for a good price. The learning curve is steep so this is good for teenagers and older. The story is very very long too so this game is a real commitment. Looks great and controls great too.
Read more
Helpful
Report abuse

Skyliner
TOP 50 REVIEWER
5.0 out of 5 stars Great switch game
Reviewed in Australia on 27 February 2020
Verified Purchase
Seems to be a long game so I’ll have to invest time into it. Looks pretty cool from all the reviews I’ve read. Grab it before it becomes rare.
Read more
Helpful
Report abuse

Michal Florek
3.0 out of 5 stars Not for me
Reviewed in Australia on 11 October 2019
Verified Purchase
A lot of people like like this game but for me camera don’t works well and battle feels chaotic
Read more
Helpful
Report abuse

Vincent
4.0 out of 5 stars Great game
Reviewed in Australia on 7 January 2021
Verified Purchase
Not given 5 stars is due to the game cart arrive unsealed.
Read more
Helpful
Report abuse

Zac Blazevic
3.0 out of 5 stars Great game
Reviewed in Australia on 28 February 2019
Verified Purchase
Postage service was horrible, but the condition of the game was ok, I absolutely love the story and the soundtrack
Read more
Helpful
Report abuse
See all reviews
Get FREE delivery with Amazon Prime
Prime members enjoy FREE Delivery and exclusive access to movies, TV shows, music, Kindle e-books, Twitch Prime, and more.
> Get Started
Back to top
Get to Know Us
Make Money with Us
Let Us Help You
And don't forget:
© 1996-2020, Amazon.com, Inc. or its affiliates