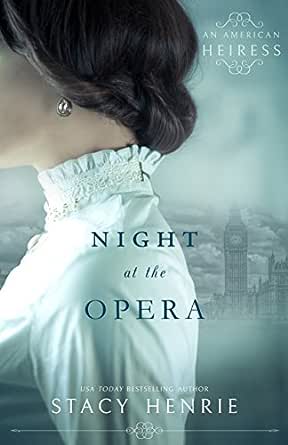 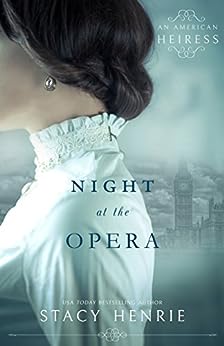 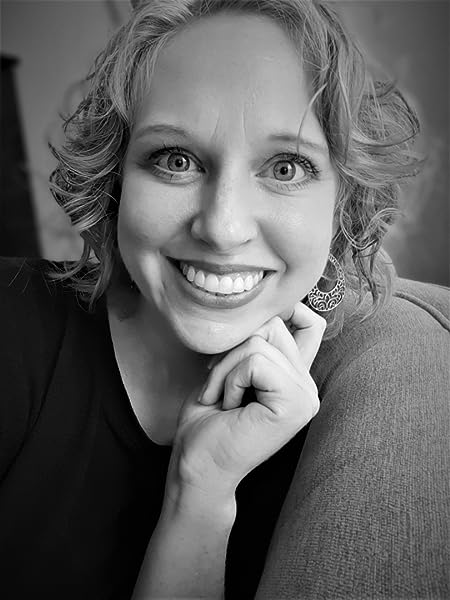 Night at the Opera (An American Heiress Book 1) Kindle Edition

Stacy Henrie is a USA Today bestselling author specializing in inspirational historical romances. Her book, Hope at Dawn, was a 2015 RITA Award finalist for excellence in romance. Born and raised in the West, she received her degree from Brigham Young University in public relations. She currently resides in Utah with her family where she enjoys reading, interior decorating, and chocolate. For more information, please visit stacyhenrie.com.

Kelly Burke is an experienced narrator and actress who trained at the Royal Academy of Dramatic Art. An American based in London, she has recorded over thirty audiobooks. Her film work has included Justice League, Macbeth, and Kill Your Friends. --This text refers to the audioCD edition.

4.6 out of 5 stars
4.6 out of 5
50 global ratings
How are ratings calculated?
To calculate the overall star rating and percentage breakdown by star, we don’t use a simple average. Instead, our system considers things like how recent a review is and if the reviewer bought the item on Amazon. It also analyses reviews to verify trustworthiness.

grape girl
4.0 out of 5 stars Enjoyable read
Reviewed in the United States on 13 January 2019
Verified Purchase
If you're looking for a good clean love story, try this one. Takes place in the early 1900s, in England. An American heiress who walks with a limp due to a childhood illness is taken by her mother to England to snag a titled husband. The heiress, has low self esteem in finding a love match due to her deformity. She'd much rather spend her time and money helping her cousin back in New York with his orphanage for deformed children. She reluctantly goes to England and decides she'll just be herself to discourage suitors. Little does she know the financially strapped British don't give a hoot about her or her deformity. All they desire is her fortune. The hero is a man who knows he must marry but would rather serve his country and route out traitors , who want to sell information to Germany, to the crown. Marriage would interfere with his mission in life. Not looking for love both the hero and heroine do just that.
Enjoyable read and I will. look into more works from this author.
Read more
7 people found this helpful
Report abuse

messy
2.0 out of 5 stars Messy
Reviewed in the United States on 8 January 2019
Verified Purchase
I know this is fiction but this is so unbelievable. Wish I'd been informed of the religious theme. Ridiculous. Selective about my reading. This was a waste.
Read more
13 people found this helpful
Report abuse

Kindle Reader
5.0 out of 5 stars Fantastic
Reviewed in the United States on 23 July 2019
Verified Purchase
Stacy Henrie is my new favorite author. This book was absolutely fantastic. Just a lovely romantic, intriguing read and exquisitely written. I am not a snobby reader, I read all genres, so I can safely say that it was refreshing when Gwen's faith in God was clearly the theme throughout the book. I noticed from some of the more negative reviews that this was an issue for some people, but I found it refreshing, and personally I wish there were more authors that were not afraid to express their faith. I highly recommend this book.
Read more
5 people found this helpful
Report abuse

Kari
5.0 out of 5 stars I would never have survived
Reviewed in the United States on 27 December 2018
Verified Purchase
This is a time period that blows my mind. Don't get me wrong. I love reading about it, but I never would have survived the courting process and the meddling mothers. To think that her family thought she had to go to a different continent to find a husband because of a bad foot is insane! What a good story. I really enjoyed it. She is relatable even if her circumstances were not. I look forward to the other books by this author. What's not to like ? Angst, mystery, love, friendship, trust and confusion. Its a hit! Lol
Read more
4 people found this helpful
Report abuse

B Anderson
5.0 out of 5 stars A good hero who finds there is more to life
Reviewed in the United States on 14 January 2019
Verified Purchase
The characters were well-developed throughout the story. Our hero was a decent, ethical man, and thought he was doing okay, but realizes something is missing. The heroine has desires that she thinks are what God wants her to do, but experiences disappointments. Mystery enough to keep the story moving and the scenery of London brought in enough to make it believable. I gave it five stars because Ms. Henrie did a wonderful job of making us aware of the attraction between the hero and heroine without just the physical attraction.
Read more
5 people found this helpful
Report abuse
See all reviews
Get FREE delivery with Amazon Prime
Prime members enjoy FREE Delivery and exclusive access to movies, TV shows, music, Kindle e-books, Twitch Prime, and more.
> Get Started
Back to top
Get to Know Us
Make Money with Us
Let Us Help You
And don't forget:
© 1996-2020, Amazon.com, Inc. or its affiliates