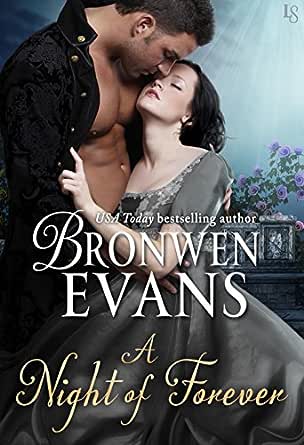 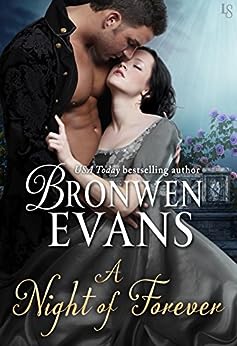 Shelagh
TOP 100 REVIEWER
4.0 out of 5 stars A very entertaining read
Reviewed in Australia on 23 November 2016
I've thoroughly enjoyed A Night Of Forever, my first Bronwen Evans story. Set in regency London this is a passionate story filled with intrigue. The characters and plot are well developed and the story moves along at a clipping pace. My only complaint, a very small one, is that I felt there was a little too much self talk at times. That aside, I will happily seek out more work from this author. This has been a very entertaining read.
Read more
Helpful
Comment Report abuse
See all reviews

A. Hemingway
4.0 out of 5 stars Loved it
Reviewed in the United Kingdom on 11 May 2017
Verified Purchase
I bought this without having read any of the other books as it was emailed me as cheap book offer. I loved it. Just the right amount of suspense romance and action. Even though I've missed a load of other's that came before it didn't really matter that much although I will be going back and reading them through. This book however does offer the solution of who the baddy is and the resolution of the situations where the other's have been building up to this so if you can read them in order it might be best to do it that way.
Read more
Report abuse

chatty1082
4.0 out of 5 stars Final chapter in the Disgraced Lords
Reviewed in the United States on 10 November 2016
Verified Purchase
After being hunted and all manner of assault on the Libertine scholars we final make it to the end. Arend, Lord Chambord is the final libertine to have his life assaulted and attempt at framing him for a crime. The heroine in this installment is Lady Isobel and she is the step daughter of the lady they think is the villainous. Hence the libertines have a hard time figuring out if she's trustworthy or if she's working for the villainous. And since this story is a romance we have a budding albeit reluctant romance between Arend and Lady Isobel.

I have to say that this was my least favorite story out of the 7 books. Thinking about this I guess I just wanted the villain caught and to be done with it, also there were a lot more sex scenes and I'm not prudish but I admit that after the first love scene I started to skim forward to the action. So for this reason I rated the story 3 1/2 stars and I rounded it up.

Bennie Lowe
5.0 out of 5 stars An Exciting Read
Reviewed in the United States on 21 May 2019
Verified Purchase
This story of Isabel and Arend is very good. As one of the Libertine Scholars, Arend is handsome, wealthy, and any woman's dream; but also wary of trusting beautiful women because of past events in his life. He and his fellows and their ladies are being hunted and in some cases harmed by a villain. They have decided it is a woman, Lady Victoria, Lady Isobel's stepmother. Isabel seeks Arend's help in proving Victoria killed her father. They become engaged so they can work together and so he can see if Isabel is helping Victoria. Their fake engagement becomes real as they begin to fall for each other. Can Arend trust Isobel with his past, his friends' lives? Can he love Isobel? There is murder, adventure, intrigue in this plot. A page turner.
Read more
Report abuse

Sheila M
4.0 out of 5 stars Enjoyable Conclusion to the Libertine Scholars' Story
Reviewed in the United States on 26 October 2016
Verified Purchase
FINAL DECISION: An enjoyable end to the drama of the Disgraced Lords series, the romance between Arend and Isobel has much angst and distrust on Arend's part. Isobel must get beyond the shields that Arend has erected while an enemy intends to destroy them both.

THE STORY: Arend Aubury will do anything to protect the only people he trusts, his fellow Libertine Scholars. After all his friends have suffered from the person who is trying to destroy them all, Arend knows that he is next and he is ready. He suspects the stepdaughter of their enemy, Lady Isobel Thompson and intends on keeping a close eye on her. When Isobel approaches him with her own suspicions about her stepmother, Arend agrees to work with Isobel -- while secretly suspecting her. Isobel wants a marriage like her friends, but can't seem to ignore the dangerous Arend. A fake betrothal hides their investigation but also ignites a strong passion between Isobel and Arend while they question motives and evade their enemies.

OPINION: This book brings the series story regarding the Libertine Scholars enemy to a close. This book overlaps the fifth book in the series, A TASTE OF SEDUCTION. I enjoyed this book because Arend and Isobel are an intriguing match with a significant amount of angst.

Arend is a man who thinks himself unworthy. He has lived in poverty, been abused, betrayed and as a result has a difficult time trusting anyone. Even his attraction to Isobel is something that he distrusts. At the same time, Arend is loyal, caring and willing to sacrifice himself for those he cares about. His guilt and shame and fear prevent him from having an open relationship, but he cannot seem to resist Isobel.

Isobel is a woman who has been tainted by her stepmother's evil, but still sees the good in people, especially Arend. Even as Isobel is warned away from him, she finds him irresistible. Isobel is strong willed and willing to go after what she wants. She can also stand up to Arend which is important. Most significantly, she believes in Arend's goodness and is determined to make him see it as well.

I liked the relationship between Arend and Isobel because many times Isobel is the strong one if the relationship which is a reversal from traditional roles. Arend has the poor self-image and abusive background and it is Isobel who must help him accept himself and believe that he is entitled to a good future.

I enjoyed this book as a closure to the series (even though there will be some spin off books). I thought that there was enough about the other characters to see where their lives are going without overwhelming the story and the overarching storyline was neatly wrapped up as well.

WORTH MENTIONING: Although this book completes the continuing story in the Disgraced Lords series, Evans states that there will be some future connected books wrapping up the romances of other characters in the series.

CONNECTED BOOKS: A NIGHT OF FOREVER is the sixth book in the Disgraced Lords series. The romance can be read as a standalone although there is an overarching story in the series that finishes in this book.

STAR RATING: I give this book 4 stars.
Read more
One person found this helpful
Report abuse
See all reviews
Get FREE delivery with Amazon Prime
Prime members enjoy FREE Delivery and exclusive access to movies, TV shows, music, Kindle e-books, Twitch Prime, and more.
> Get Started
Back to top
Get to Know Us
Make Money with Us
Let Us Help You
And don't forget:
© 1996-2020, Amazon.com, Inc. or its affiliates