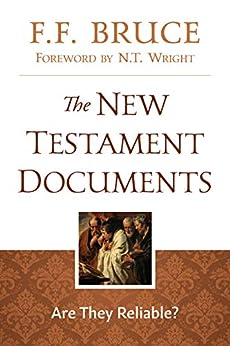 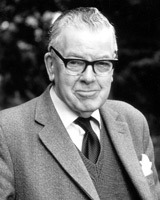 The New Testament Documents: Are They Reliable? Kindle Edition

(1910-1990) The Rylands Professor of Biblical Criticism and Exegesis at the University of Manchester, England. During his distinguished career he wrote numerous widely used commentaries and books and served as the general editor of the New International C --This text refers to an alternate kindle_edition edition.

4.4 out of 5 stars
4.4 out of 5
183 global ratings
How are ratings calculated?
To calculate the overall star rating and percentage breakdown by star, we don’t use a simple average. Instead, our system considers things like how recent a review is and if the reviewer bought the item on Amazon. It also analyses reviews to verify trustworthiness.

Lorna Ruth Jenkins
5.0 out of 5 stars Bible originals
Reviewed in Australia on 30 July 2016
Verified Purchase
This book is quite old now but it still gives a concise and detailed account of the original documents of the New Testament. A great starting place to explore the topic.
Read more
Helpful
Report abuse
See all reviews

Michael Toogood
5.0 out of 5 stars i wholeheartedly recommend this book
Reviewed in the United Kingdom on 17 January 2018
Verified Purchase
This is a classic on the subject of the reliability of the New Testament documents.
Its author, the late F F Bruce was one of a handful of leading scholars who helped bring the church back to its
evangelical roots in the 1950s. i wholeheartedly recommend this book.
Read more
2 people found this helpful
Report abuse

S. Meadows
4.0 out of 5 stars An excellent, concise introduction though lacking in detail
Reviewed in the United Kingdom on 11 July 2011
Verified Purchase
It has to be noted that it is quite a short book (123 pages excluding preface, bibliography, etc.) though it does pretty much what it says on the tin by looking at some of the evidence in support of the reliability of the New Testament. Regardless of whether you agree with Bruce's analysis, it has been a hugely influential book in modern christian thought.

In Bruce's analysis, he does skim on some of the detail which I admit frustrated me a little. For example, in the first chapter, he looks at the date of the authorship of the books of the New Testament. I felt that this was a little too brief and that there could be plenty of arguments posed for dates slightly later than Bruce supposes.

After looking at the dates, he begins to look at the contents of the gospels, the importance of Paul's writings, the historical detail in Luke's writing (in particular, the book of Acts), before going on to look at other evidence outside of the New Testament such as archaeological evidence and other non-christian written sources.

The book serves as a great introduction to the subject of biblical criticism as a defence for its authenticity, though it is by no means a comprehensive survey. The non-canonical writings of the early church and of the gnostics are given extremely little space. But it is nothing more than an introduction. For the open-minded sceptic, who is willing to engage with the evidence and is looking for a comprehensive review, this is not the most convincing case. There are some gems to be found, though most of them lie towards the front of the book.

In the version I have, there is a great preface written by N.T. Wright, in which he sums up quite well the best use for this book: "The [person] who reads Bruce today will want to supplement him by reading judiciously in more recent writers. But he remains an excellent foundation."
Read more
5 people found this helpful
Report abuse

GERALD
4.0 out of 5 stars Reliable History
Reviewed in the United Kingdom on 22 November 2017
Verified Purchase
A really encouraging book written by a reliable scholar. The book really affirms the authenticity of Christian belief and lifts it into a reason to make it one strand of a true faith in Jesus as one's own personal Saviour. One line from the book remains in my mind : There is as much evidence for Christ as there is for Julius Caesar.
Read more
One person found this helpful
Report abuse

Becket
5.0 out of 5 stars A classic in Biblical scholarship
Reviewed in the United Kingdom on 15 November 2013
Verified Purchase
FF Bruce was one of the leading evangelical scholars in the UK during his academic career. His books help enormously to understand the background to the Bible and to the New Testament in particular.
It is a must read for anyone wanting to understand the Bible more.
Myths which abound on the internet are destroyed by his scholarly work. For example, without his intending to do it, after reading this book, the argument that the New Testament was created after Constantine I is undone.
It includes sections on Archaeological evidence, Paul and Luke's writings, early Jewish and Christian writings.
Read more
4 people found this helpful
Report abuse