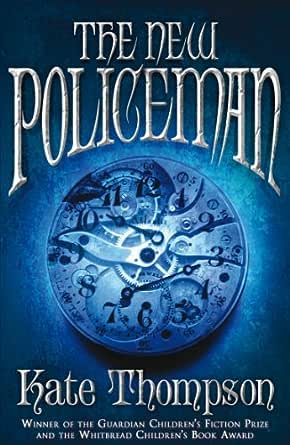 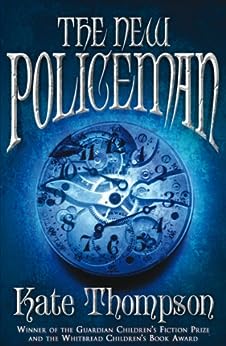 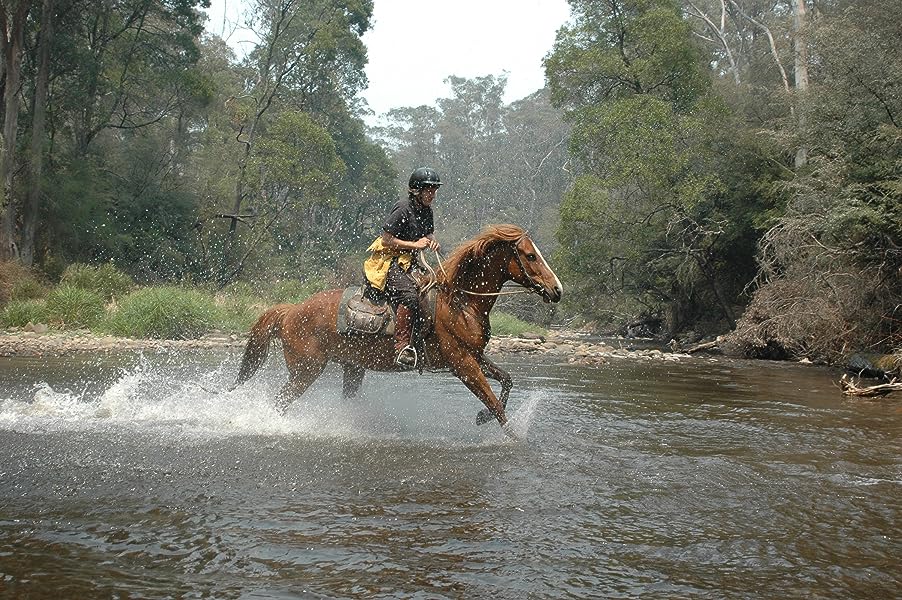 THE NEW POLICEMAN is a multi-award-winning, wonderfully intriguing story going right to the heart of Irish magic, folklore and music. --This text refers to an out of print or unavailable edition of this title.

There is never enough time in Kinvara. When Helen Liddy is asked what she wants for her birthday, she says, 'Time. That's what I want. Time.'

Fifteen year-old JJ is continuing the Liddy family tradition with his fiddle-playing. But one day he discovers that music might no tbe the only thing that runs in his veins. Can it be true that his great-grandfather was a murderer?

When JJ sets out to buy his mother some time he discovers the answer, as well as some truly remarkable things about music, myth and magic.

Who knows where the time goes?

'There is something hallucinatory, if not delirious about this stylish, magical book' JAN MARK

" 'Kate Thompson writes with marvellous and magical ease' - Janni Howker, TES 'Daring and accomplished' - Books for Keeps 'A storyteller of genius' - Irish Times" --This text refers to an out of print or unavailable edition of this title.

Kate Thompson has travelled widely in the USA and India and has studied law in Lodon. After living in Country Clare in Ireland, she has move to Kinvara in Country Galway and there, three years ago, she discovered her passion for playing the fiddle - which has had a marked influence on the writing of THE NEW POLICEMAN - she is now an accomplished player and also has a great interest in building and restoring instruments. --This text refers to an out of print or unavailable edition of this title.

JJ Liddy and his best friend Jimmy Dowling often had arguments. JJ never took them seriously. He even considered them a sign of the strength of the friendship, because they always made up again straight away, unlike some of the girls in school, who got into major possessive battles with each other. But on that day in early September, during the first week that they were back in school, they had an argument like none before.

JJ couldn't even remember now what it had been about. But at the end of it, at the point where they usually came round to forgiving each other and patching it up, Jimmy had dropped a bombshell.

'I should have had more sense than to hang around with you anyway, after what my granny told me about the Liddys.'

His words were followed by a dreadful silence, full of JJ's bewilderment and Jimmy's embarrassment. He knew he had gone too far.

'What about the Liddys?' said JJ.

'Nothing.' Jimmy turned to go back into school.

JJ stood in front of him. 'Go on. What did she tell you?'

Jimmy might have been able to wriggle his way out of it and pretend it was a bluff, but he had been overheard. He and JJ were no longer alone. Two other lads, Aidan Currie and Mike Ford, had overheard and had come to join in.

'Yeah,' said Mike. 'If he doesn't know he must be the only person in the county who doesn't.'

The bell rang for the end of the morning break. They all ignored it.

'It was a long time ago,' said Jimmy, still trying to retract.

'One of the Liddys . . .' Jimmy said something else but he mumbled it beneath his breath and JJ couldn't hear. It sounded like 'burgled the beast'.

The teacher on yard duty was calling them in. Jimmy began to walk towards the school. The others fell in.

It was Aidan Currie who said it, loud enough for JJ or anyone else to hear. 'Sure everyone knows about it. Your great-granddad. JJ Liddy, same as yourself. He murdered the priest.'

JJ stopped in his tracks. 'No way!'

The boys, except for Jimmy, laughed.

'Always mad for the music, the same Liddys,' said Mike.

He began to hop and skip towards the school in a goofy parody of Irish dancing. Aidan trotted beside him, singing an out-of-tune version of 'The Irish Washerwoman'. Jimmy glanced back at JJ and, his head down, followed them as they went back in.

JJ stood alone in the yard. It couldn't be true. But he knew, now that he thought about it, that there had always been something behind the way some of the local people regarded him and his family. A lot of people in the community came to the céilís and the set-dancing classes that were held at his house on Saturdays. They had always come, and their parents and grandparents had come before them. In recent years the numbers had increased dramatically with the influx of new people into the area. Some of them came from thirty miles away and more. But there was, and always had been, a large number of local people who would have nothing to do with the Liddys or their music. They didn't exactly cross the street to avoid JJ and his family, but they didn't talk to them either. JJ, if he'd thought about it at all, had assumed it was because his parents were one of the only couples in the district who weren't married, but what if that wasn't the reason? What if it had really happened? Could JJ be descended from a murderer?

The teacher was standing at the door, waiting for him.

JJ hesitated. For a moment it seemed to him that there was no way he could set foot inside that school again. Then the solution came to him.

The teacher closed the door behind him. 'What do you think you were doing, standing out there like a lemon?'

'Sorry,' said JJ. 'I didn't realize you were talking to me.'

'Who else would I be talking to?'

The new policeman stood on the street outside Green's pub. On the other side of the bolted doors a gathering of musicians was at full throttle, the rich blend of their instruments cutting through the beehive buzz of a dozen conversations. Across the road the rising tide slopped against the walls of the tiny harbour. Beneath invisible clouds the water was pewter-grey with muddy bronze glints where it caught the street lights. Its surface was ragged. The breeze was getting up. There would be rain before long.

Inside the pub there was a momentary hiccup in the music as one tune ended and another began. For a couple of bars a solitary flute carried the new tune until the other musicians recognized it and pounced on it, and lifted it to the rafters of the old pub. Out in the street, Garda O'Dwyer recognized the tune. Inside his regulation black brogues his cramped toes twitched to the beat. At the kerbside behind him his partner, Garda Treacy, leaned across the empty passenger seat of the squad car and tapped on the window.

Larry O'Dwyer sighed and took a step towards the narrow double doors. He'd had a good reason for becoming a policeman but sometimes it was difficult to remember what it was. It wasn't this; he was sure of that much. He hadn't become a policeman to curtail the enjoyment of musicians and their audiences. A few miles away, in Galway city, violent crime was escalating dramatically. Street gangs were engaged in all kinds of thuggery and muggery. He would be of far more use to society there. But that, as far as he could remember, was not why he had become a policeman either. There were times, like now, when he suspected that the reason, whatever it was, might not have been a particularly good one.

The tune changed again. The light inside the squad car came on as Garda Treacy opened his door. Larry stilled his tapping foot and rapped with his knuckles on Mary Green's door.

Inside the pub throats closed, conversations collapsed, the drone of voices faltered and died. One by one the musicians dropped out of the tune, leaving, for a while, an oblivious fiddler tearing away enthusiastically on her own. Someone got through to her finally, and the music stopped mid-bar. The only sound that followed was Mary Green's light footsteps crossing the concrete floor.

One of the narrow doors opened a crack. Mary's anxious face appeared. Behind her, Larry could see Anne Korff perched on a bar stool. She was one of the few people in the village that he had already met. He hoped he would not be required to take her name.

'They're just finishing up,' said Mary earnestly. 'They'll be gone in five minutes.'

'I hope so,' said Larry. 'That would be the best thing for everyone.'

As he returned to the car, the first drops of rain were beginning to fall on to the surface of the sea.

C Moore
5.0 out of 5 stars A beguiling musical time mystery fusing modern and mythological worlds
Reviewed in the United Kingdom on 7 October 2018
Verified Purchase
Slow to get stared like a mournful old air, then evolving into a lilting jig and whirling hornipe, racing thrugh time, beween worlds, to conclude with a satisfying set. Trad music is used as a motif and undercurrent to drive the story forward, helping to create a beautiful fusion of modern Ireland, ancient folklore and mythology, with several gripping mysteries lurking on and below the surface. Darker elements are handled beautifully, with enough depth to provoke thought, without descending to the depths of disturbia. Elements of social observation and critique ring true, developed through contrast with life in Tír na nÓg. I couldn't put it down, and made me want to read it with a senior primary class to mine the richness of Musical, Historical, Artistic & Geographical potential for cross curricular immersion in a world that is other and present! Pure Genius!
Read more
Report abuse

Natasha N-J
5.0 out of 5 stars Still as fabulous 7 years later!
Reviewed in the United Kingdom on 12 February 2019
Verified Purchase
I first ready this book whilst I was in school, around 16 years of age. I finally remembered the title and fell in love with this book all over again. I'm looking forward now to the rest of the series (which I didn't know existed until now).
Read more
Report abuse

booksforlife
5.0 out of 5 stars Five Stars
Reviewed in the United Kingdom on 24 March 2015
Verified Purchase
A well enjoyed gift for a child
Read more
Report abuse

RS
4.0 out of 5 stars Four Stars
Reviewed in the United Kingdom on 27 February 2016
Verified Purchase
very good book but sometimes you don't know what's going on
Read more
Report abuse
See all reviews
Get FREE delivery with Amazon Prime
Prime members enjoy FREE Delivery and exclusive access to movies, TV shows, music, Kindle e-books, Twitch Prime, and more.
> Get Started
Back to top
Get to Know Us
Make Money with Us
Let Us Help You
And don't forget:
© 1996-2020, Amazon.com, Inc. or its affiliates