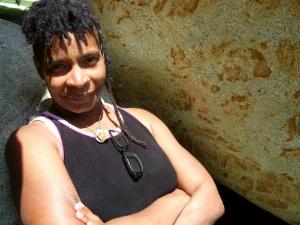 by Nalo Hopkinson (Author)
4.5 out of 5 stars 33 ratings
See all formats and editions
Sorry, there was a problem loading this page. Try again.

The New Moon's Arms is a dance of lost-and-found. Hopkinson knows not to get too sentimental, thanks in large part to her heroine's unsinkable sense of humor. It let me hear the mermaids singing.

A most impressive work...vivid and richly nuanced, utterly realistic yet still somehow touched with magic.

Considerable talent for character, voice, and lushly sensual writing...her most convincing and complex character to date.

Hopkinson has had a remarkable impact on popular fiction...[Her] work continues to question the very genre she adopts, transforming them from within through her fierce intelligence and her commitment to a radical vision that refuses easy consumption...With sly humor and great tenderness, [she] draws out the hope residing in age and change.

Shows new depths of wisdom, humor, and insight...Like life, Hopkinson's novel doesn't resolve every mystery. But Hopkinson has answered the essential questions in The New Moon's Arms, and she's wise enough to know we need nothing more.

Nalo Hopkinson is the author of The New Moon's Arms, The Salt Roads, Midnight Robber, and Brown Girl in the Ring, among many others. She has won numerous awards, including the John W. Campbell Award, the World Fantasy Award, and Canada's Sunburst Award for fantasy literature. Her award-winning short fiction collection Skin Folk was selected for the 2002 New York Times Summer Reading List and was one of the New York Times Best Books of the Year. Currently, she is a professor of creative writing at the University of California-Riverside.

Gin Hammond received her MFA from the American Repertory Theatre Institute for Advanced Theatre Training at Harvard University/Moscow Art Theatre School. A native of San Diego, she has worked steadily across the country at theaters such as the Guthrie, Arena Stage, the Longwharf Theatre, ACT, the Pasadena Playhouse, ART, the Berkshire Theatre Festival, and the Studio Theatre. She has also performed internationally at the Moscow Art Theatre and the Roadside Theatre in Heidelberg, Germany. Additionally, Ms. Hammond is a grant recipient of the Ford Mellon Foundation for her work on a multicultural anthology of plays, under the auspices of Ms. Ruby Dee.

Start reading The New Moon's Arms on your Kindle in under a minute.

Dr. H. Kara
5.0 out of 5 stars Wise, original, touching - and great storytelling!
Reviewed in the United Kingdom on 2 June 2021
Verified Purchase
I read Brown Girl In The Ring first, and enjoyed that a lot. This book blew me away. Hopkinson's writing is economical, her settings are lush, and her characters are abundant. She is a master storyteller, not flinching from unpopular topics like menopause and the cruelties that can arise from the collision of love, duty, and assumptions. I finished reading a couple of days ago but the characters are still vivid in my mind. Highly recommended - and I'm looking forward to reading all Hopkinson's other books.
Read more
Report abuse

Empress
4.0 out of 5 stars A Wonderful read!
Reviewed in the United Kingdom on 19 February 2013
Verified Purchase
This is the first book that I have read by Nalo Hopkinson, and I would read her again. I have never read anything like this before, the humour, the sadness, and the spiritual elements had me hooked from the beginning. I particularly liked the colloquial Caribbean terminology that was used, as it made it even more interesting and enjoyable, I found myself laughing out loud on quite a few occasions!
The storyline of the `people of the sea' was a little unbelievable, but not inconceivable, and that added to the intrigue of wanting to know where Agua (the boy that Calamity `fosters') appeared from and how she was going to get him back.
It was an interesting book with many parts to it; her menopause, the death of her father and the disappearance of her mother all entwined with her volatile relationship with her daughter and the love for her grandson, and strangely enough Agua the `boy from the sea'.

Stephanie Burgis Samphire
5.0 out of 5 stars Her best book yet
Reviewed in the United Kingdom on 11 April 2007
Verified Purchase
I loved Nalo Hopkinson's The New Moon's Arms. I really enjoyed all her earlier books, but this one I fell in love with completely. It's such a perfect mix of quirky magic and universal mother-daughter dynamics, all narrated by a character who's deeply flawed and yet somehow irresistible. She says and does such awful stuff, with so little self-consciousness - yet she suffers deeply from her own mistakes, she's really trying to do her best, and she's re-named herself "Calamity" in recognition of how often she screws up. She's so perfectly herself, and one of the most engaging narrators I've read in a long time.
Read more
3 people found this helpful
Report abuse

Amazon Customer
5.0 out of 5 stars Five Stars
Reviewed in Canada on 13 October 2015
Verified Purchase
Great Book nice read
Read more
One person found this helpful
Report abuse
See all reviews
Back to top
Get to Know Us
Make Money with Us
Let Us Help You
And don't forget:
© 1996-2021, Amazon.com, Inc. or its affiliates