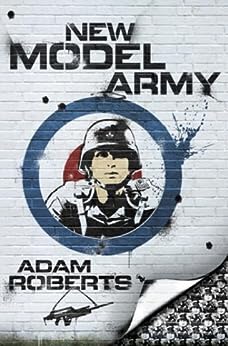 A nightmarish vision of future war from a literary master of SF. --This text refers to the digital edition.

Adam Roberts is Professor of 19th Century Literature at London University. His first novel, SALT, was shortlisted for the Arthur C. Clarke Award, as were his novels GRADISIL and YELLOW BLUE TIBIA. His novel SWIFTLY was shortlisted for a Sidewise Award. He has also published a number of academic works on both 19th Century poetry and SF, and is a regular contributer on SF for the BBC and various online venues. --This text refers to the digital edition.

Comparable to Swift, Orwell and Atwood - THE TIMES --This text refers to an alternate kindle_edition edition.

Comparable to Swift, Orwell and Atwood - THE TIMES --This text refers to an alternate kindle_edition edition.

Adam Roberts is Professor of 19th Century Literature at London University. His first novel, SALT, was shortlisted for the Arthur C. Clarke Award, as were his novels GRADISIL and YELLOW BLUE TIBIA. His novel SWIFTLY was shortlisted for a Sidewise Award. He has also published a number of academic works on both 19th Century poetry and SF, and is a regular contributer on SF for the BBC and various online venues. --This text refers to an alternate kindle_edition edition.
Read more

3.5 out of 5 stars
3.5 out of 5
26 global ratings
How are ratings calculated?
To calculate the overall star rating and percentage breakdown by star, we don’t use a simple average. Instead, our system considers things like how recent a review is and if the reviewer bought the item on Amazon. It also analyses reviews to verify trustworthiness.

BONES
1.0 out of 5 stars Dumb, Perhaps Lazy, Premise Makes For A Stupid Book
Reviewed in Australia on 1 February 2016
Verified Purchase
This is the second Adam Roberts book I have read and it will most assuredly be the last. The other was Salt, about a decade ago, and the minute I read the last sentence I threw it into a street bin. It was just as bad as this so I really only have myself to blame, I suppose.

The problem with it is, like Salt, the assumptions we are forced to live with so that the author can write his story are far too unrealistic, bordering on absurd. Basically, what he has done is to inflate a terrorist cell into a full-blown army of several thousand "irregulars". Worse, it is run as a "true democracy", which means there is no hierarchy and everyone has to vote before any decisive action can be taken. Voting is done online and all the "soldiers" are connected through a "wiki", which presumably runs through Wi-Fi or some future replacement for it. HEre is but a small list of the really obvious flaws in this set-up:

- The first thing the authorities do before raiding terrorists today is to jam their mobile phone coverage. Apparently this knowledge is lost to the government of the future because they make no effort at all to disrupt their enemy's communications.

- Being part of a "true democracy" seems to mean that no-one is allowed to specialise. Everyone must be a jack-of-all-trades because no-one is a master of anything. They have the wiki to consult whenever they need to do anything. It also seems to mean that everyone can have a say as to the conduct of a battle, regardless of their level of experience. There seems to be zero value in expertise.

- Whilst I am sure we have all seen images of a tank with it's turret blown clean off, it is not possible to do that with a hand-held anti-armour weapon. Maybe in the future that might become possible but I am pretty sure that if/when it does, the professional armies will be the first to know and they'll change their tactics accordingly. Not in Mr Roberts' future, though.

- Helicopters are really hard to shoot down on the battlefield because they fly fast and low. Most of the time a soldier on the ground would be lucky to even be able to identify the aircraft type as it flew overhead, much less engage and destroy it, yet untrained soldiers in this NMA do it all the time.

- When your rifle jams in the middle of a firefight, you will not have time to consult a wiki to work out how to fix it. You will need the kind of repetitive training and discipline regular soldiers get so that you can fix it blindfolded, without conscious thought. If you can't do that, you will not last long on any real battlefield.

- If you go to the trouble of fighting a battle over a piece of ground, you do not then move on and leave it unguarded. If you did that in a real war, your enemy would just leave you to march through, then close in behind you and re-take the position. Yet the NMA explicitly makes no effort to hold onto any terrain it has won.

You get the idea. Their actions are more like that of a drunken mob on NYE than any kind of army in battle. They wouldn't last five minutes up against any professional forces. It seems the author has never read any military sci-fi or I doubt he would fall into so many traps. Or maybe he just can't be bothered doing any research? Whatever the reason, it is a shame because he writes well and if it was possible to overlook all the flaws, I reckon he could write great novels. Sadly, the flaws here are gaping chasms and I stopped reading before I had hit half-way. Never again, Mr Roberts. Never again.
Read more
Helpful
Report abuse
See all reviews

David Harris
4.0 out of 5 stars War is play...
Reviewed in the United Kingdom on 22 April 2010
Verified Purchase
This is an intriguing and compelling book. Its premise is that, twenty or thirty years into the future, "New Model Armies" have sprung up - loose assemblages of individuals, sourcing their own weapons, coordinating themselves by Wi-Fi, with no leaders, voting minute by on tactics and - bluntly - living to fight. One such army, Pantegral, is contracted to fight for Scottish Independence and promptly lays waste to much of Southern England.

Roberts has a lot of fun with this concept - both in describing the wreckage of the M4 corridor (a s we witness the Battles of Basingstoke and Reading, Betjeman's prayer "Come friendly bombs and fall on Slough..." seems about to be answered) and in teasing out the implications of the military innovation: NMAs are formidable forces which easily crush the hapless British Army, even though vastly outnumbered. The narrator of the book, Tony Block, who is a member of Pantegral, ascribes this to their "democratic" nature - continually referring to the old-style armies as "feudal". I have to say this aspect never quite convinces. More germane, though, are Block's attempts to answer the question "why?" - what are these NMAs for, why do people want to join in the risky business of fighting, what is the point? It's a measure of Adam's range and skill as a writer that in exploring these issues he is able to muse on the place of play in human evolution, the nature of love as well, of course, as the morality and purpose of war. If that sounds daunting, don't let it put you off - the narrative is compelling, and the tension between the NMA point of view ("we are a pure democracy: therefore whatever we do is right") and the horrific consequences that the war unleashes are very well done.

There is another theme running through the book - of the NMA as the stirring of some kind of beyond human life, a composite being with thoughts and consciousness of its own. This culminates in the only part of the book I couldn't relate to, the third part (only a few pages long) which sets out an interior monologue of one such giant. I found this hard to understand and to relate to the rest of the story. But for that, I'd have given it five stars.

Matt Weyland
2.0 out of 5 stars A book of three faces..
Reviewed in the United Kingdom on 5 February 2014
Verified Purchase
This book immediately gripped me with it's fascinating conceit of the 'democratic' fighting force enabled by modern technology, and to start with it was a real page burner. Despite possible flaws in this idea in reality (I mean when do on-line discussions ever reach a consensus?) the writing was good enough to allow suspension of disbelief, a principal requirement of any good fantasy/sci-fi novel.

However I feel that the author really didn't know what to do with the book after the initial chapters. In retrospect I think this would have made a really excellent short story or novella, in these formats there is little need for a 'clean' or rounded ending. However in attempting this with the dull second, and pretentious third sections the author managed to lose my interest and enthusiasm completely.
Read more
3 people found this helpful
Report abuse

Andrew Holt
4.0 out of 5 stars Thought provoking
Reviewed in the United Kingdom on 22 July 2012
Verified Purchase
Based on a world that is not that unlikely. You only have to consider the modern phenomena of Anonymous, the occupy movement, the recent riots in the UK, and 'flash mobs' to realise that this could happen.

The most revolutionary idea is that you could build a true democracy where everybody gets a say.

I feel the ending is a little week though.
Read more
Report abuse

Amazon Customer
4.0 out of 5 stars Flawed concept. Great battle scenes
Reviewed in the United Kingdom on 19 June 2020
Verified Purchase
Great descriptions of battle scenes. Gaps in the logic of how the armies are supplied. Is war the natural state? Destruction as play.
Read more
Report abuse

PhilCo
1.0 out of 5 stars Had to stop reading.
Reviewed in the United Kingdom on 15 August 2020
Verified Purchase
The author doesn't know enough about the subject matter to pull it off. The narrator has a very irritating manner and voice.
Read more
Report abuse
See all reviews
Back to top
Get to Know Us
Make Money with Us
Let Us Help You
And don't forget:
© 1996-2021, Amazon.com, Inc. or its affiliates