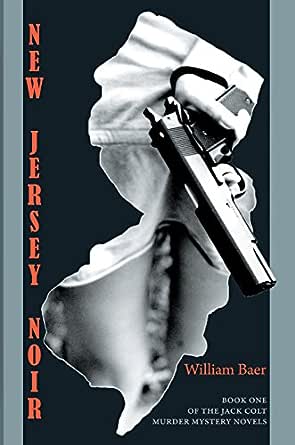 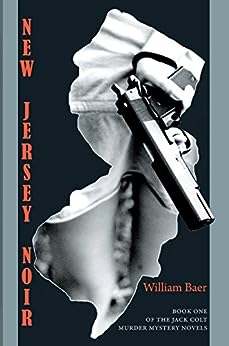 An accomplished poet, playwright, and short-story writer, William Baer has turned to crime, creating a brilliant debut novel, the hard-boiled whodunit New Jersey Noir. If you're looking for classic noir elements, you'll find them here, in spades. And you'll find fine literary elements here, as well: precise prose, perfect pacing, stunning imagery, complex characterization, grand historical and cultural contexts, and a superb sense of place. More than anything else, New Jersey Noir is a loving tribute to the Garden State by a writer who appreciates its grime as much as its glory. Early on, the narrator of the novel, PI Jack Colt, lists some great New Jersey voices, including Frank Sinatra, Connie Francis and Bruce Springsteen. It's time to add a couple more great Jersey voices to this list: Jack Colt himself and his creator, William Baer.
-- Hollis Seamon (Jersey girl, born and raised), author of Somebody Up There Hates You

Not since Donna Tartt's The Secret History have I read a novel as mesmerizing, engrossing, and delectable as William Baer's New Jersey Noir. It's been a long time since I've read a book so compelling that I was forced to drop everything and commit myself for several hours to experiencing, vicariously, the strange and haunted darkness that is the shadow world of this novel. In prose as fast-moving as a bullet, Baer compels the reader to keep flipping pages more and more rapidly, but "page turner" doesn't even begin to describe how immersive and fascinating this detective novel is. Baer's writing is taut, gut-wrenching, and entirely blurb-worthy. If you don't love this book, it's entirely possible that you don't have a pulse. New Jersey Noir and Baer's talent presage a brilliant career for this wonderfully gifted writer.
-- Terri Brown-Davidson, author of Marie, Marie, Hold On Tight

Jack Colt, the private investigator in William Baer's New Jersey Noir, romances the genre to the suspenseful effect that JJ "Jake" Gittes achieves in Roman Polanski's acclaimed Chinatown. In place of technicolor LA, however, Baer evokes a cinematic chiaroscuro New Jersey, specifically Paterson, its history and politics limned over a baseline of Springsteen, doo-wop, and Whitney Houston. In the early pages of this compelling mystery when Colt muses that his fellow detective, Luca Salerno, "was tough all right, but not tough enough to look into the heart of darkness," the allusion to Joseph Conrad alerts us that we are in for a more trenchant narrative than a gumshoe and dames thriller. Baer fulfills by deftly executing the universal themes of incest, adultery, madness, and undisguised evil rising out of the swamps of the Meadowlands and beyond.
-- Dennis Must, author of Hush Now, Don't Explain

William Baer, a recent Guggenheim fellow, is the author of several books including NEW JERSEY NOIR: THE JACK COLT MURDER MYSTERY NOVELS, BOOK ONE (Able Muse Press, 2018), TIMES SQUARE AND OTHER STORIES (Able Muse Press, 2015), The Ballad Rode into Town; Luís de Camões: Selected Sonnets; and Classic American Films: Conversations with the Screenwriters. His short stories have been published in The Iowa Review, Kansas Quarterly, The Chariton Review, The Dalhousie Review, and many other literary journals. He's also a former Fulbright in Portugal and the recipient of a Creative Writing Fellowship in fiction from the National Endowment for the Arts. --This text refers to the paperback edition.

Dernie Gillis
5.0 out of 5 stars Worth the money.
Reviewed in Canada on 14 April 2019
Verified Purchase
Good read. Waiting for the next edition.
Read more
Report abuse

Ed Yorke
5.0 out of 5 stars Murder in North Jersey
Reviewed in the United States on 3 June 2018
Verified Purchase
William Baer does for Paterson New Jersey what David Liss does for 18th century London and Raymond Chandler did for 20th century Los Angeles. By that I mean, Baer deftly constructs a literary canvas of Paterson for PI Jack Colt and his disparate friends, clients, relatives, associates and lovers. Paterson was built around the Paterson Falls which powered the development of the silk industry as envisioned by Alexander Hamilton during the Revolutionary War. Surrounded by affluent suburbs of New York City, Paterson developed into an East Coast version of a rust belt city with all the inherent urban challenges...... Investigating the murder of his Uncle and PI partner on the walkway above the Paterson Falls, Jack is called to the scene of a young woman's naked body frozen in the shallow waters of Packanack Lake. A prodigious body count follows his dual investigations until he realizes he might be the ultimate target. ....My first rule for entertaining crime fiction is there must be something interesting or likable about the protagonist and there's a lot to like about Jack Colt. Armed with his direct ancestor's Colt Python pistol and sporting Armani suits and sunglasses at night, Jack is a very tough former Passaic County Prosecutor who's well connected in the power structures of county and state governments. He uses his political connections to unravel the mystery surrounding the extreme violence dogging his every move...."New Jersey Noir" is a brilliantly conceived debut mystery/thriller by a very talented poet, playwright, screenwriter writer and now author of the first book in an auspicious crime fiction series.
Read more
2 people found this helpful
Report abuse

Amazon Customer
5.0 out of 5 stars A nearly perfect dark mystery
Reviewed in the United States on 26 November 2020
Verified Purchase
I can't heap enough praise on this fine novel. The mystery is deep. The stage is perfectly set. There is warmth and wit and caring in the material. Characters are well drawn. Dialog is crisp. The writing is practically flawless.

I have read no better detective story in the past year, and I've read dozens.

The only slight fault that I found is that the complexity of the plot led to a somewhat lengthy and elaborate denouement. But all the many loose ends were neatly tied and the final note played was a sweet one, and is a perfect setup for Book 2.
Read more
Report abuse

Allen Roth
3.0 out of 5 stars Promising but no cigar
Reviewed in the United States on 20 April 2018
Verified Purchase
Jack Colt is a memorable character. Had boiled private investigator with an interesting family history. This book abounds with well described characters but the author lost this reader with a an unbelievable story line. Entertaining read until home stretch.
Read more
Report abuse

joanne bouchard
5.0 out of 5 stars Good read.
Reviewed in the United States on 6 March 2021
Verified Purchase
I grew up in New Jersey and I so enjoyed reading about the places I remember. I’m a crime mystery fan and this book lived up to my expectations.
Read more
Report abuse
See all reviews
Back to top
Get to Know Us
Make Money with Us
Let Us Help You
And don't forget:
© 1996-2021, Amazon.com, Inc. or its affiliates