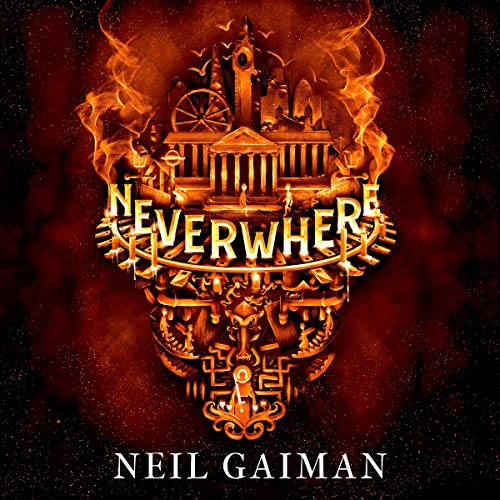 4.6 out of 5 stars
4.6 out of 5
6,714 global ratings
How are ratings calculated?
To calculate the overall star rating and percentage breakdown by star, we don’t use a simple average. Instead, our system considers things like how recent a review is and if the reviewer bought the item on Amazon. It also analyses reviews to verify trustworthiness.

E. J. Dawson
4.0 out of 5 stars Great Magic World Building
Reviewed in Australia on 31 May 2020
Verified Purchase
The walk into a secret world would never be easy but Richard rescues a bleeding girl on the street he gets more than he bargained for. His ordinary life is turned upside down as he struggles to make sense of it all. The characters are dark, the magic built world rich, and the edge of desperation makes this a page-turner.
Read more
Helpful
Report abuse

Dennis J Pale
4.0 out of 5 stars Awesome urban fantasy
Reviewed in Australia on 18 October 2017
Verified Purchase
This is my first Gaiman novel. I've only got Good Omens as my reference point for the quality of his work (even though that was a joint project with Terry Pratchett), but I found it entertaining and accessible. I could see myself reading more of his work. Recommended for readers who like their fantasy novels bent and weird.
Read more
2 people found this helpful
Helpful
Report abuse

Amazon Customer
5.0 out of 5 stars A wonderful trip
Reviewed in Australia on 8 October 2017
Verified Purchase
I highly recommend this book to anyone seeking a bit of action, horror, escapist fantasy and thrills all wrapped in rich and constant comedy and humour. I read an earlier review which described this book as "Harry Potter for Adults," which is a perfect description. The only problem with the book is it ended. I hope you enjoy it as much as I did.
Read more
2 people found this helpful
Helpful
Report abuse

Jacqui Dodds
4.0 out of 5 stars Urban Fantasy set in London Below.
Reviewed in Australia on 13 January 2015
Verified Purchase
A fun urban fantasy free of vampires and werewolves set in th weird underground world of "London Below". The heroes are: Richard who wants to get back his ordinary boring life; Door wants to avenge the murder of her family; Hunter wants to kill the Great Beast of London. They join forces to overcome several challenges. The power structure of this society depends on bartering and favors, so it is impossible to tell who to trust. The most evil and supernaturally powerful characters in this tale, Mr. Vandemar and Mr. Croup, take so much fun in their mayhem, (“Can't make an omelette without killing a few people”).
Read more
Helpful
Report abuse

Miriam Verbeek
5.0 out of 5 stars Great imagination
Reviewed in Australia on 9 March 2021
Verified Purchase
Wee, what can you expect from Neil Gaiman. Loved his imagination and the interplay of his characters. Fantasy you can identify with.
Read more
Helpful
Report abuse

Clara Redman
4.0 out of 5 stars Modern Dickens
Reviewed in Australia on 17 August 2018
Verified Purchase
I loved this under world of London and I feel I should have read it ages ago. All the characters feel real, and convey a Dickensian truth about London, the UK, and life in general.
Read more
Helpful
Report abuse

Wendy
4.0 out of 5 stars The mysterious world beneath the footpath.
Reviewed in Australia on 19 November 2020
Verified Purchase
Neil Gaiman at his best. I love this unplanned adventure to Neverwhere.
Read more
Helpful
Report abuse

Vicky Kennard
4.0 out of 5 stars Enter a strange, but familiar, world
Reviewed in Australia on 4 November 2020
Verified Purchase
A great book where a man enters a world that is just a little 'off'. If you know the London Underground well you will enjoy this book.
Read more
Helpful
Report abuse
See all reviews

M. Dowden
5.0 out of 5 stars Welcome to London Below
Reviewed in the United Kingdom on 13 July 2017
Verified Purchase
This kindle edition is the definitive text, which like me if you do still have for instance the first edition that came out when this was first published, you will notice some differences. Although originally conceived as a TV series Neil Gaiman wanted to write a novel of it where he could expand upon certain themes and add pieces that were cut from the television series.

So welcome to London Below, a place under London teeming with life, and with some quite noticeable differences. When Richard Mayhew walks down the road one night with his fiancée, Jessica so he tries to give aid to a girl who seems distressed – thus starting him off on an adventure that he will never forget, and one that could change his life. The girl is called Door, and her family being killed and herself in danger she needs assistance to find out what is going on.

With a host of unforgettable characters we have the rather nasty but somehow quite enjoyable Mr Croup and Mr Vandemar, along with an earl’s court held in an Underground train carriage, as well as an old man called Old Bailey, an angel called Islington, and the Marquis de Carabas to name a few. Some people can talk to rats and it is best not to ask what meat it is in meals when you buy them off a stall.

Gaiman wanted to create something like ‘Alice in Wonderland’ for a more mature audience, and it can be argued that not only has he done that with this but also he created a world that is something that you really want to visit, especially if you can have a look around the Floating Market. I must admit that I am not a massive fan of Neil Gaiman, but this is one of those books of his that I always enjoy reading.
Read more
28 people found this helpful
Report abuse

LEP
5.0 out of 5 stars Falling through the gaps
Reviewed in the United Kingdom on 9 October 2016
Verified Purchase
I'll keep this review shortish as other reviewers have adequately covered it. I read this book for my book club and was unsure, when it was allocated as a book to read, as I'm not that keen on Urban fantasy. I like my fantasy to be 'otherworld', sword and sorcerer. However, on beginning to read this I was hooked. On the book cover blurb it states that it is Monty Pythonish, I have always hated Monty Python, so that initially put me off. However, I wouldn't class it as such, if anything it reminded me of The Hitchhiker's Guide to the Galaxy. The book holds your interest and is a very clever piece of writing. Poor Richard, a young businessman, minding his own business and going out for the evening with his somewhat managing girlfriend, Jessica, takes pity on an injured young ragamuffin of a girl, much to Jessica's disgust. In helping young Door, who unbeknown to Richard, has otherworldly (magic) skills, Richard also becomes one of the 'non-people' to those of the 'normal' world, London Above. He finds that Jessica and his work colleagues no longer recognise him. For, like Door, Richard has 'fallen through the gap' and become one of the inhabitants of London below. We all have probably met or seen 'non-people'; those who have 'fallen through the gaps' of society and whom we, the 'normal' people, largely choose to ignore i.e. the homeless, who sleep rough on streets for whatever reason. Very clever precept!
Read more
19 people found this helpful
Report abuse

Kid Ferrous
4.0 out of 5 stars One of Gaiman’s greatest tales of imagination
Reviewed in the United Kingdom on 18 April 2021
Verified Purchase
In Neil Gaiman’s “Neverwhere”, we follow the lead character Richard Mayhew as he finds himself embroilled in something far beyond his comprehension after trying to help a young girl that he finds bleeding on the street.
He soon finds himself in London Below, an entire society that is both separate from and part of London Above. London Below feels like the London of old, with markets and bartering systems with the addition of beings that are not altogether human and a little touch of magic and more that lets the imagination run wild (something that Gaiman is rather good at encouraging in all ages). This is added to be the superb illustrations by Riddell which weave their way around Gaiman's words as well as through your imagination.
Imo this is a better experience than the television adaptation, which has its merits but the visuals are always better in your own head.
Read more
One person found this helpful
Report abuse

A.M.K
4.0 out of 5 stars Gripping and sinister.
Reviewed in the United Kingdom on 26 April 2017
Verified Purchase
A gripping yarn which never gets dull for a moment. A cast of wonderful, memorable characters inhabit the dark and sinister world of London Below....Gaiman is a splendid storyteller, and his imagination is dark and complex and clever. I read The Graveyard Book with my 10 year old, and we both enjoyed it so much that I followed up with this one. My only very slight criticism is that some of the characters could be more fully developed. Its a visual imagination feast, begging to be a film...but the characters leave me slightly unsatisfied.
Read more
10 people found this helpful
Report abuse

Joanne
4.0 out of 5 stars Prepare for randomness and creativity
Reviewed in the United Kingdom on 12 December 2016
Verified Purchase
I certainly grew to like this book more and more as I read on. At first it was a bit confusing and I didn't know where the story was going but it soon turned interesting!

Richard is living a normal ordinary life when it's turned upside down by a girl named Door and Richard discovers a whole new side to London. Helping Door along the way, Richard encounters action and finds out just what kind of a man he really is as he meets friends and foe alike.

Increasing in pace near the end, I didn't want to put it down till I found out exactly what happened to the characters. It's a story that I didn't expect to like after reading the first few chapters but I've been pleasantly surprised and I would definitely try another book from Neil Gaiman.
Read more
8 people found this helpful
Report abuse
See all reviews
Back to top
Get to Know Us
Make Money with Us
Let Us Help You
And don't forget:
© 1996-2021, Amazon.com, Inc. or its affiliates