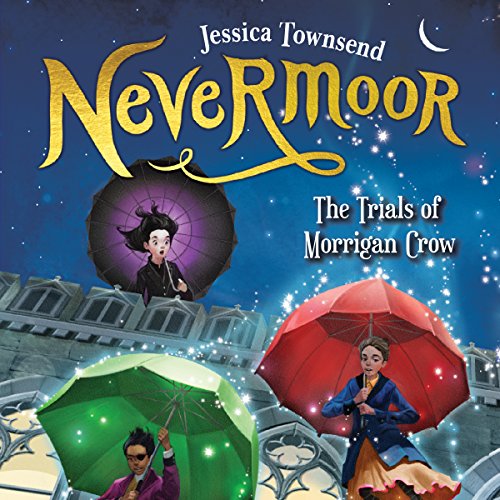 4.7 out of 5 stars
4.7 out of 5
1,711 global ratings
How are ratings calculated?
To calculate the overall star rating and percentage breakdown by star, we don’t use a simple average. Instead, our system considers things like how recent a review is and if the reviewer bought the item on Amazon. It also analyses reviews to verify trustworthiness.

Erin Philip
5.0 out of 5 stars Wundrously Awesome!
Reviewed in Australia on 26 April 2020
Verified Purchase
The Nevermoor series is a HUGE hit at my school right now, ever since it came out. At first when I was told about it,
I was more than a little sceptical, thinking it was impossible to beat the novelty and absolute superiority of Harry Potter and the Selection Series, as well as the Red Queen series by Victoria Avesbury, but congrats, Jessica Townsend, you've done the impossible, and you're officially in my top 5 favourite books. I ADORED this novel and recommend it to everyone who enjoys fantasy. This is a book for ages 8+. Hope you love it!
-Erin Philip
Read more
2 people found this helpful
Helpful
Report abuse

MR R S BROOKES
5.0 out of 5 stars An unexpected gem
Reviewed in Australia on 18 January 2018
Verified Purchase
I read this to our 10 year old daughter and it was entertaining and enjoyable for both of us. The characters have a bit more depth to them than some children's books and the story does not completely revolve around good versus evil. I think the comparisons to Harry Potter are pretty superficial, if I wrote more I would be giving spoilers so I will stop. Anyway, if you are looking for a good book to read to a kid I thoroughly recommend this.
Read more
One person found this helpful
Helpful
Report abuse

Jody Ellis
5.0 out of 5 stars A PAGE GRIPPING STORY!
Reviewed in Australia on 8 August 2020
Verified Purchase
Wow!!!! i can't wait to read the next book 'Hollowpox'! When Morrigan Crow met Jupiter North i didnt put the book down untill i realised it was 12:17! MIDNIGHT!
Read more
One person found this helpful
Helpful
Report abuse

Oz Pom
5.0 out of 5 stars More please!
Reviewed in Australia on 2 January 2021
Verified Purchase
What a brilliant first novel by this up and coming Australian writer. Morrigan Crow is a great character. Should be a great series.
Read more
Helpful
Report abuse

blair evans
5.0 out of 5 stars FANTASTIC READ.
Reviewed in Australia on 10 April 2021
Verified Purchase
I haven't read a book for years, but my son had to read this book for school. So I thought I would get a copy to keep an eye on him. I found myself drawn into the world with Morrigan. I could not put it down.
I am 47 years old and I loved it so very much.
I have ordered the next two books.
Read more
Helpful
Report abuse

Lea
5.0 out of 5 stars Captivating Escapism
Reviewed in Australia on 8 November 2017
Verified Purchase
After hearing an author interview on local radio I was keen to read this novel that was being touted as the next Harry Potter. If you loved HP, you will love this. I couldn’t wait to get home from work each day to keep reading! Great characters and very well written. I can’t wait for more.
Read more
2 people found this helpful
Helpful
Report abuse

Rebecca
5.0 out of 5 stars Wunderful!
Reviewed in Australia on 25 January 2019
Verified Purchase
This book was so well written!! The characters practically sprang to life from the pages. It was a lot funny, a little sad and full of adventure. I can’t wait to read the next one. This was a fun and easy read. Recommend it for any age.
Read more
Helpful
Report abuse

Mr C P Smith
5.0 out of 5 stars bbf (best book forever)
Reviewed in Australia on 5 April 2020
Verified Purchase
this book is the best I've read since Harry potter! I keep running out of books but this one kept me busy for ages, this is definitely a five star book!
Read more
One person found this helpful
Helpful
Report abuse
See all reviews

Arkham Reviews
5.0 out of 5 stars Creative and filled with Wunder
Reviewed in the United Kingdom on 21 March 2018
Verified Purchase
Despite being a middle grade novel, the plot of this book is surprisingly dark. It opens on the funeral of young girl and features some scenes that young or sensitive readers may find scary. You have been warned.

The Trials of Morrigan Crow is a really creative novel. It reads a bit like a cross between Harry Potter, Roald Dahl and The Chronicles of Narnia, focusing on a young girl with a curse as she is charged with passing four trials in order to gain the protection of an elite society. Every chapter of the story was an utter treat to read, introducing creative new concepts and colourful characters. The story still introduced the City of Nevermoor quite nicely, making clear that it was a place where anything could happen.

The plot of the story flows really well. Its opening chapter really draws the reader in, making them curious about the fate that will soon befall Morrigan. The chapters that follow really help to build a mystery, forcing the reader to keep reading to discover who Ezra Squall is, if Morrigan will pass the trials and what her knack is.

There were only a few areas where I felt that the world building could be improved a tad. There were a couple of core concepts in the world - namely Morrigan's curse and the nature of Wunder - that weren't really explained in the story. While you do learn a little more about both of these as the story progresses, I still felt that there were a lot of blanks in my understanding about them. Hopefully, this will be resolved by subsequent novels. The story also ended on a bit of a cliffhanger. While this stage of Morrigan's journey is wrapped up, there are many threads left hanging following the twist ending.

Yet the novel's strongest aspect was its characters. I really liked Morrigan. Although her childhood as been miserable, her hope, sense of wonder and kindness always shine through. Although she is often afraid, she proves to be brave in even situations where she is powerless and willing to put herself in danger to help others.

Beyond Morrigan, the novel boasts a wide array of memorable characters. My favourite was Jupiter North, who behaves a bit like a male Mary Poppins, but Hawthorne the Dragon Rider is also a charming character who forms a cheery counterpoint to the often anxious Morrigan. I'm really curious to see how these characters develop in future volumes, as I feel that Jupiter in particular has a lot of room for development.

All in all, this book was great. It's creative, fast-paced and has a brilliant cast of characters. I really can't wait to read more.
Read more
17 people found this helpful
Report abuse

Miss Cleveland
5.0 out of 5 stars A sublime fantasy with a huge heart.
Reviewed in the United Kingdom on 26 February 2018
Verified Purchase
Born on Eventide, Morrigan Crow is a cursed child. Everything that goes wrong in Jackalfax can be traced back to her. She is feared by the townsfolk, and despised by her family. And, destiny dictates she will die on her 11th birthday.

However, the mysterious Julian North interrupts her final meal to introduce himself as her patron, and with Death on her heels, she is spirited away to Nevermoor to begin her trials for the Wundrous Society. Trials for children with unique and extraordinary talents. But Morrigan doesn’t have one, other than cheating death.

To stay in Nevermoor, she needs to complete her trials and win her place in The Wundrous Society. If she doesn’t, her destiny may just have been delayed…

Morrigan is self-doubting, determined and daring. Julian North is confident, caring and charismatic. With an abundance of enigmatic characters, both loveable and loathsome, and the wonderously whimsical and inventive settings, Nevermoor is a place that once you enter, you will never want to leave.

The Trials of Morrigan Crow is a sublime fantasy with a huge heart that left me dreaming of a life in The Deucalion Hotel and yearning for a Brolly Rail to transport me to school.

I will be breaking my strict “no buying hardbacks for my bookshelf” rule for this book (I have a child who needs food, or so he tells me). There is no way I can wait for the paperback to share it at school. I need to be surrounded by people who’ve ventured to Nevermoor so we can talk bedrooms, smoke and shadows…

Kelly H
5.0 out of 5 stars Great book and I’m 37!
Reviewed in the United Kingdom on 17 June 2018
Verified Purchase
I’m 37 and I bought this for my god-daughter but decided to have a read first. Bloody brilliant! I grew up on Enid Blyton, loved Harry Potter. And I see this somewhere between both. Some of the nicer characters remind me a bit of the Magic Faraway tree but in a more grown up way and no way near as babyish. The not so nice characters have a sinister feel about them akin to the baddies in HP. A great story that I feel will develop into something a bit more philosophical as the main character mature’s (which may just be something adults will pick up on). Great reading for kids and adults alike. Something for everyone.
Read more
12 people found this helpful
Report abuse

chsg_lrc
5.0 out of 5 stars If you liked reading Harry Potter then I am sure you’ll enjoy ...
Reviewed in the United Kingdom on 6 May 2018
Verified Purchase
Such a fab read! If you liked reading Harry Potter then I am sure you’ll enjoy Morrigan Crow. I don’t want to compare them as Morrigan has her own story to follow. A quirky, determined , slightly headstrong girl who has been told she is cursed. Everything that happens is her fault. The ageing gardener dies-Morrigan fault, change in the weather- Morrigans fault, everything- Morrigans fault! At least she won’t be blamed for everything forever, she will die on her 11th Birthday, all cursed children do. Her father and stepmother do not seem to sad about this, the embarrassment and cost Morrigan brings to the family will stop soon. On Morrigan 11th Birthday a gangly ginger man, Jupiter North appears and just as quickly steals her away, running from the jaws of death and takes her to a secret city called Nevermoor. Over the year Morrigan finds friends and people she can call family while learning about herself while competing in 4 incredibly hard trials.

@ImaginELLA
5.0 out of 5 stars A Wunderful Start To This Series 💫
Reviewed in the United Kingdom on 1 July 2019
Verified Purchase
This is the perfect tale, it’s simply sweet and thrilling. It features a high stakes competition that will keep you on the edge of your seat at every trial, while also focusing on the importance of friendship and believing in yourself. Morrigan is such a fantastic protagonist with endless complexities and loveable traits. It is a charming, developed world with a unique magic system and fascinating characters. There are so many twists and turns and unanticipated events that it’s hard not to love. Jessica Townsend knows what readers want. She knows we need to be hooked and surprised and mystified. Being hooked is easy, as the world building is special, like a cake with multiple layers. You think you’ve tasted it all, only to discover there are more hidden flavours. A sensational and highly recommended 5⭐️ read.
Read more
2 people found this helpful
Report abuse
See all reviews
Back to top
Get to Know Us
Make Money with Us
Let Us Help You
And don't forget:
© 1996-2021, Amazon.com, Inc. or its affiliates