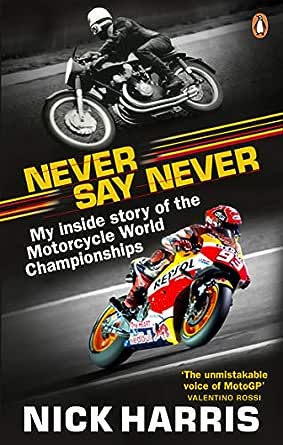 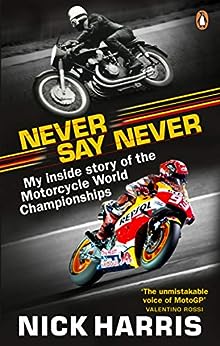 Never Say Never: The Inside Story of the Motorcycle World Championships Kindle Edition

As 'The Voice' of motorcycle racing for forty years, commentator Nick Harris became the biggest star not on two wheels in the paddock, and this is his mostly eye-witness, white-knuckle account of MotoGP's scorching seventy-year history.

The story starts on the Isle of Man in 1949, when Geoff Duke, with his slicked-back hair and one-piece black leathers, became the nation's hero, defying the odds and winning the most dangerous race in the world on a British-built Norton. Just over a decade later at Mallory Park, another British champion and one of the greatest riders of all time Mike Hailwood screamed past a young Nick Harris on his 250cc Honda, and a life-long passion was born.

Harris has been at the centre of the sport for decades, getting to know the riders as individuals, seeings feuds unfold, champions made, careers and sometimes lives ended. We'll see the biggest podium stars up close, from Barry Sheene and Kenny Roberts to Valentino Rossi, and we'll meet the mechanics behind them, the manufacturers who poured millions into the teams, and the organisers who, in the early days, ruthlessly compromised rider safety for profits. The drama has often been as tense off the track as on it.

This is the book the motorcycling world has been waiting for.

kiril
5.0 out of 5 stars A story told by a motorcycle racing enthusiast
Reviewed in the United Kingdom on 28 July 2019
Verified Purchase
This is true insiders view of the world of motorcycle racing told by a lifelong racing enthusiast. What Nick Harris didn't experienced firsthand on track (he never raced) he observed from a vintage point and discussed with the main protagonists for years of presence of the most prestigious motorcycle championships. After the half mark of reading the book, I realize there is only one major flaw - it's way too short. The pictures are not that many, but are carefully selected to match the story. And the story is the really important part. I do enjoy the reading.
Read more

Random Roland
5.0 out of 5 stars My mate Harry...
Reviewed in the United Kingdom on 14 June 2019
Verified Purchase
I just have to say, thanks Nick for writing this incredible book. It has brought back many memories of people and places from the past. Your true professionalism and dedication to your work is nothing short of exceptional. Enjoy your well deserved retirement with Sheila and your family. Cheers, Roland. PS: The pictures at the end are amazing !
Read more
2 people found this helpful
Helpful
Report abuse

PANAGIOTIS VORRIAS
5.0 out of 5 stars Best 2019 motogp book
Reviewed in the United Kingdom on 16 July 2019
Verified Purchase
It is a great book.i suggest to all racing fans
Read more
One person found this helpful
Helpful
Report abuse

RTE
4.0 out of 5 stars Definitely worth the read!
Reviewed in the United States on 14 July 2019
Verified Purchase
First, I would buy this book again to do over.

Why only 4 stars? The first several chapters really just factually recounted the more notable events/riders/wins as MotoGP was developing. There was not the level of insight (inside stories) for which I was hoping. On the other hand, the last many chapters were a thrill to read and that may be because I didn't start following MotoGP until 2010. Mr. Harris' book elicited many good memories. Furthermore, and this is huge, with a new level of understanding I will watch all of the future GP races as I never have before -- the riders, the bikes, the support teams, the media, DORNA, and certainly the various venues. Even though the current crew does a fine job commentating, I do miss Mr. Harris' style and voice!