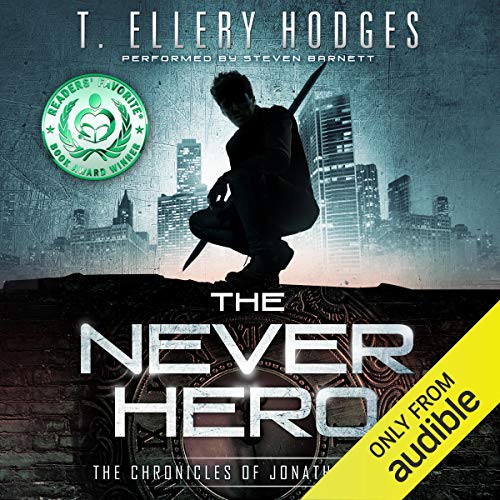 The Never Hero: The Chronicles of Jonathan Tibbs, Book 1

4.5 out of 5 stars
4.5 out of 5
439 global ratings
How are ratings calculated?
To calculate the overall star rating and percentage breakdown by star, we don’t use a simple average. Instead, our system considers things like how recent a review is and if the reviewer bought the item on Amazon. It also analyses reviews to verify trustworthiness.

John Rohde
5.0 out of 5 stars Plugging the dyke
Reviewed in Australia on 22 August 2017
Verified Purchase
Like that a ancient victory where the few held back the many. This is the tale of just one who protects a gate from another world. He needs to be super strong to win each challenge. Losing could mean invasion and the end of everything. It's just that the battle is hidden. He's seen to prepare, but for what? The battles are not remembered by anyone but him. Never the Hero!

All set in the home of a group of students, weird philosophical discussions, guys'n'girls, love interests, the sexy neighbour, etc. Not to forget Uncle Sam's interest in the alien visiting our hero. Great story. Well written. Can't wait for the next instalment. Enjoy!
Read more
Helpful
Report abuse

MadHatter
TOP 500 REVIEWER
4.0 out of 5 stars An excellent beginning
Reviewed in Australia on 24 March 2017
Verified Purchase
To be honest, I found the writing style a little dry to begin with, but I am thankful I perservered, as I became engrossed in the story. However, it does follow several POVs, which is something I don't like (especially Grant - not a nice person, I have no desire to be inside his head).
Jonathon Tibbs is an unlikely hero, with greatness thrust upon him (or rather, in him). A nerdy college student, who has to become a warrior, because the other option is (hmmm, let's see...) death. He finds it to be a powerful motivator. Along the way, he experiences a wealth of the darker emotions we are prone to, but he naturally is, at heart, very heroic.
There is some humour, a decent smount of action, a tiny amount of romance. However, this book is primarily about Jonathons' struggle to transform himself, without losing his humanity in the process.
Read more
Helpful
Report abuse

A
5.0 out of 5 stars 50 shades of Hero
Reviewed in Australia on 10 November 2017
Verified Purchase
Contemplative vs action .
Wasn’t so sure about the violence...never seen any use in it, yet Mr Hodges appears to have thought long and hard about the shades of grey between choices, freedom and duty, the blurred lines between and the fact that heroes are seldom un-fearing warriors (Dustin Hoffman comes to mind 🙂)...and woven it all into a rather captivating story.
Lovely to hear a wordsmith examining beliefs and concepts in such an eloquent manner. And producing such a tangible not-so-super hero.
Beaut, mate...looking forward to your next.
And T ain’t so bad a name when you might could have been called Jonathan or Andrew or such 😄. It is what it is and we wear it with pride because it meant a lot to someone once...
If only things were simple 🤔
Read more
Helpful
Report abuse

Kindle Customer
5.0 out of 5 stars Read it
Reviewed in Australia on 30 August 2016
Verified Purchase
I gave this novel 5 stars because... well there are a few great novels that you read where you can't put the book down, the plot or/and characters are immortalised in your memory, or you have to read the novel over and over again just to put your mind back into that world again. The Never Hero is one of these books where both the characters and plot are stuck in my head and I have not been able to put this book down since I bought it. I suspect that I will read this novel numerous times in the coming years and enjoy every second.

This novel is set in the modern world wherein a young adult is forced into a situation witch he doesnt want but can understand. Contains unexpected plot twists and a protagonist who is realistic and unusual.

However, I am me and you are not therefore your tastes do not follow my own. But this was an amazing read and I have already recommended it to my friends and now to you.
Read more
Helpful
Report abuse

Amazon Customer
5.0 out of 5 stars Super good!
Reviewed in Australia on 31 December 2015
Verified Purchase
While it shouldn't really get 5 stars because there were quite a few editing oversights, especially early in the book, the story and attention to detail around the motivations and experiences of the protagonist, and the superbly written action scenes deserve 6 stars, so it evens out. I'm looking forward to part 2. Usually I'm not into superheroes, but this was a fresh perspective that nevertheless did masterful things with the usual archetypes.
Read more
Helpful
Report abuse

Smithy
5.0 out of 5 stars Great
Reviewed in Australia on 2 September 2016
Verified Purchase
This is good. Very good. One of the best books I've read all year and I just pray the 2nd book does justice to first because I can't wait get hold of it. And I LOVED that Jonathan didn't miraculously have all the money and gear he needs to the point of considering bank robbery. There is wonderful reality check aspect to the story. And the household discussions actually got me thinking... Give it a try. You wont be sorry.
Read more
Helpful
Report abuse

Kindle Customer Sands
TOP 1000 REVIEWER
4.0 out of 5 stars Stiring start of a saga
Reviewed in Australia on 24 August 2016
Verified Purchase
Enjoyed this unique take on the eternal battle. Nice twist and development of the many shades of grey that life pulls on us. Couple of threads just didn't nest into the tapestry for me at the end.. maybe they will be tied up in following events. Solid start with what I consider a commendable and rare original premise.
Read more
Helpful
Report abuse

Dawn
5.0 out of 5 stars Really good
Reviewed in Australia on 4 January 2016
Verified Purchase
As massive comic book fan I was exited to read a book about a superhero, especially one that puts so much effort into detail. However I did find Tibb's sulking and naivety a little tedious at times. Would have preferred it if he had a few more fights. I also (spoilers!) didn't get the bloodlust thing. sounds like he should talk to someone about that. (Done with spoilers) All in all a great read, have already reccomended it to several friends. Does anyone know where to get the second book? dying too read it!
Read more
Helpful
Report abuse
See all reviews

Inverdon
3.0 out of 5 stars Interesting premise but sluggish delivery.
Reviewed in the United Kingdom on 26 July 2018
Verified Purchase
I bought this book because the Amazon blurb said it was in a similar style to Ready Player One...but it is not. Sadly while the characters are well drawn, they are boring, without humour or liveliness, missing the creative spark that makes them likable. I find too much introspective musings the least helpful way to get into the skin of the character. Endlessly rehashing pseudo philosophical problems does not engage me in their dilemma. The storyline is drowning in this and it's really dead boring! Cut down to its bones, it could be quite interesting, but the pace is mired in rubbish philosophical concerns and stretching the idea that the hero is the new Jesus, the alien is just another version of God and the villains of the piece are representatives of the Devil.I am afraid that like his characters the author is building a new comic book style version of the Bible.

Mr. HODGES, please give the story some oomph...some speed, twists and turns and surprises....have you really thought out your Alien World? Their reasons for invading Earth seem a bit too contrived to be believable. Inject some humour, that makes me laugh or at least smile. Your hero is in a tight place but occasionally a ray of Sun must get through his cloud of depression and introspection....I may soon start rooting for the Aliens.

The women characters are as interesting as an old stick. Even the Bible had Mary Magdalene and the Virgin Mary! The main character's fear of his mother's disapproval is ridiculous...She comes across as a monster... is she the mother of a monster too?

This is fiction, I want to suspend my disbelief, I don't want any intimate knowledge of the hero's bank account and finances.
I was disappointed by the self pity, the cry of "Why me?"Give him a reason to live...and get on with it!
Read more
2 people found this helpful
Report abuse

Andy
3.0 out of 5 stars It’s fine.
Reviewed in the United Kingdom on 25 May 2018
Verified Purchase
It’s pretty much, beat for beat, the same book as Contractor by Andrew S. Ball, but less engaging and exciting, and with less pathos and less well-rounded characters with less character development.
It was pretty enjoyable and the sequel exists, so decent overall.
Read more
One person found this helpful
Report abuse

Kindle Customer
5.0 out of 5 stars The best book of the year!
Reviewed in the United Kingdom on 14 November 2015
Verified Purchase
This was without doubt, my most enjoyable read of the year. I couldn't put it down. The only thing that I wish was that the second one was out already. Man, this book had it all. Well done sir, well done.

Mr Hodges, you have just become one of my favourite authors.
Read more
2 people found this helpful
Report abuse

D. L. J. Kite
5.0 out of 5 stars The Never Hero
Reviewed in the United Kingdom on 15 December 2014
Verified Purchase
A very unusual book, very well written with a very good spin on the Superhero Genre. I never usually read these sort of books, but I'm very glad I did. It was refreshing and exciting, the hero could be anyone. I don't want to give too much away,but it's well worth reading and for a freebie.
Read more
One person found this helpful
Report abuse

Rev. Andy
3.0 out of 5 stars Three Stars
Reviewed in the United Kingdom on 4 May 2018
Verified Purchase
Passed the time but nothing special. I won't be continuing with the series.
Read more
Report abuse
See all reviews
Back to top
Get to Know Us
Make Money with Us
Let Us Help You
And don't forget:
© 1996-2021, Amazon.com, Inc. or its affiliates