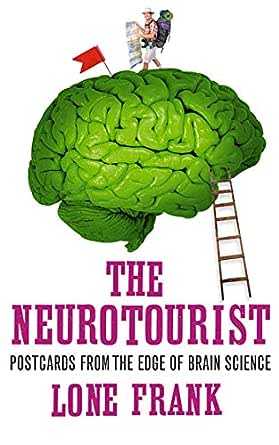 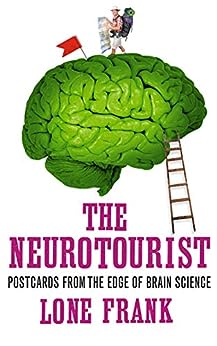 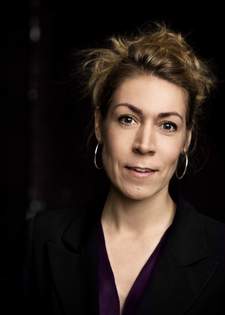 The Neurotourist: Postcards from the Edge of Brain Science Kindle Edition

..".does a great job of exploring the impending neuro-revolution and the sometimes scary consequences of neuro-technology." -- BBC Focus

"In this fascinating exploration of the most intriguing brain experiments so far this century, Lone Frank introduces us to a coming neuro revolution." New Scientist

."..does a great job of exploring the impending neuro-revolution and the sometimes scary consequences of neuro-technology." BBC Focus --This text refers to an alternate kindle_edition edition.

Flame
5.0 out of 5 stars Great neurotourism!
Reviewed in the United Kingdom on 28 January 2014
Verified Purchase
I love this book. Lone Frank explains the involvement of different areas of the brain in different phenomological experiences such as how meditation influences the brain, how certain areas in the brain give us the feeling of a presence, etc. Interesting and insightful.
Read more
One person found this helpful
Report abuse

Amuzun
4.0 out of 5 stars Four Stars
Reviewed in the United Kingdom on 21 April 2015
Verified Purchase
A very enjoyable book for the lover of science and popular science.
Read more
Report abuse

Mr. Paul Hopkins
4.0 out of 5 stars The Neurotourist: Postcards from the Edge of Brain Science
Reviewed in the United Kingdom on 8 October 2011
Verified Purchase
This book explores some of the cutting edge areas of brain research. If the scientific breakthrough of the C19th was Evolution, and the C20th was DNA then this book postulates that the C21st will be the century of the brain and cognition. We still know little of the 1.5kg of "lumpy grey matter" that we carry around in our heads and whilst we share much of our DNA with lizards we share little of our higher cerebral cortex functions.

Looking at topics as diverse as happiness, economics, religion and our ability to lie this book is a good read for those interested in the area of neuroscience. It helps to have a little bit of a science background but it is not too demanding. There is a good notes section with reference to further papers and sources for those who want such things but the writing style is easy on the brain and invites you to think (and the explains to some degree why you can!) about the ideas it raises.
Read more
12 people found this helpful
Report abuse

R. A. Davison
2.0 out of 5 stars Underdeveloped information from a highly pompous author
Reviewed in the United Kingdom on 8 April 2012
Verified Purchase
I don't know what I expected from The Neurotourist but it wasn't what I got. In this book Danish scientist Lone Frank visits a variety of academic institutions and has conversations with a variety of neuroscientists and discusses how neurology impacts religion, ethics, sociology, crime, marketing and economics.

Some of these subjects are interesting but it's very much theory-lite. It doesn't go into more than surface detail on any topic. I covered Bentham, Mill and Kant for example in my A Levels and Frank did not add to my knowledge there. I've read the books on lying by Paul Ekman so discovered nothing really new in the crime section either. Neuro-marketing is interesting, the idea that in the future individuals will be sold things according to what their neurons react to, a real Big Brother is watching you idea. Other ideas such as whether you'll be refused for a job because your neurology reveals you may develop Alzheimers or schizophrenia have been covered in a deeper way than Frank achieves by genetic ethics in other books and novels.

I read this book because I was interested in knowing more about neuroscience, but my enthusiasm for the book quickly dwindled due to the manner in which Frank inserts herself, her feelings and her opinions into the narrative. This isn't just the latest science in the field as say a Chown or a Kaku book is about theoretical physics. Frank in discussion about religion and neurology manages to segue onto a lengthy diatribe in support of Richard Dawkins, going off on a complete tangent. A strong atheist herself, proudly promoting it as confirmation of superior intellect, she stands on a total soapbox throughout this section.

Later, when she meets an eminent highly respected academic in Wisconsin, he speaks of his Buddhist views and she goes on to sneer at him behind his back by being sarcastic about his beliefs to one of his students. Via these two sections she reveals an unpleasant arrogant side to herself and makes it difficult to want to be in her company.

I strongly felt that the information she imparted in certain areas was heavily tilted to promote her personal views.

Also in this book, apparently about neuroscience, there is a tendency towards 'all about me' by Frank, particularly when she has a brain scan which reveals an average brain. I was taught that once a piece becomes about the person writing it rather than the subject it is on then it has failed.

By the end of this book, an end which I found myself willing to occur, I found I despised Lone Frank and I would not read further work by her 3/10
Read more
4 people found this helpful
Report abuse

S. V. Pollack (shepsl)
5.0 out of 5 stars a fascinating tripe along the edges of the most complex device there is
Reviewed in the United States on 15 December 2013
Verified Purchase
I find this to be a good example of popular science writing. The author strikes a good balance between talking to neuroscientists and talking to slightly backward nine-year-olds. The material is informative without being tedious or condescending. I'm an easy mark for brain books so for me this one is a keeper.
Read more
One person found this helpful
Report abuse
See all reviews
Back to top
Get to Know Us
Make Money with Us
Let Us Help You
And don't forget:
© 1996-2021, Amazon.com, Inc. or its affiliates