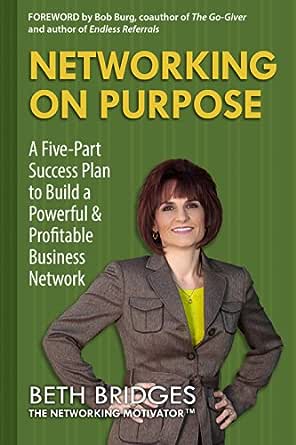 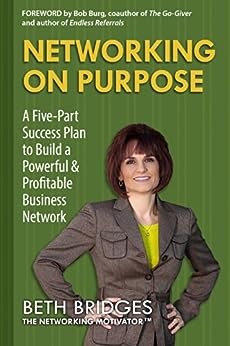 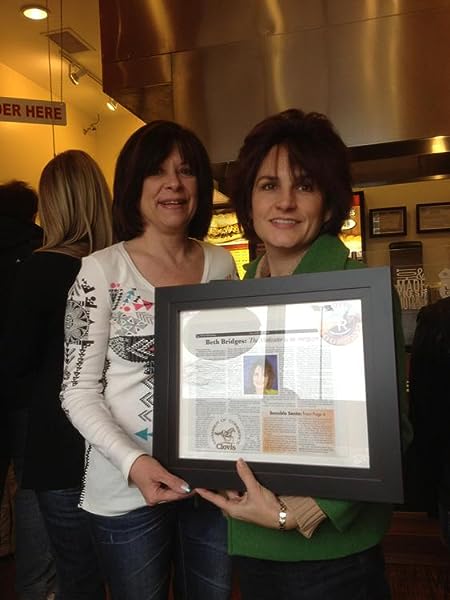 What if you could get more than networking tips? What if you had a powerful, deliberate and intentional business networking strategy that was incredibly simple? What would this do for your business? For your career? Equally useful for new or experienced networkers, the "Five-Part Networking Success Plan(tm)" was developed through years of research and real-life networking experience.

Beth Bridges, The Networking Motivator (tm), has attended over 2,500 networking events in the last 11 years. Along the way, she discovered a simple but powerful framework for developing and growing a powerful and profitable business network.

You, too, will discover:

* How to meet influential new people at business networking events.


* Why "small talk" is one of your best tools ... and the elevator pitch isn't

* How to become so valuable to other people that the sales practically make themselves.
* Which business networking groups you should focus on ... and which ones you should forget.


Beth is recognized as one of the industry's top networkers by Chamber executives across North America and has given hundreds of presentations to entrepreneurs, associations and business people looking to strategically grow their networking skills.

The 2,500+ business networking events she went to included networking groups that she personally started. Friends and business connections began asking her for networking tips. Instead, she revealed a simple but powerful business networking strategy everyone from experienced CEO's to brand new sales people can use to be more confident and make more sales.
click to open popover

Janie J, Author
5.0 out of 5 stars How to Network the Right Way and Feel Comfortable About It
26 November 2019 - Published on Amazon.com
Verified Purchase
Beth's book gives us the lowdown on networking - what to do, what not to do and how to be more comfortable networking. I am an introvert who didn't like networking. Now I know why - I don't like people selling their services and products as soon as they say, "hello". Beth teaches us that is NOT the way to network. Instead, we need to reach out to people, get to know them on a personal level and figure out how to give value to them. That is the right way to network and it is much more pleasant and beneficial to all parties involved!
Read more

Lucas
5.0 out of 5 stars Excellent primer on networking with clear steps and easy language.
12 January 2017 - Published on Amazon.com
Verified Purchase
Beth Bridges does an excellent job of describing the purpose of networking, the Five Part Success Plan, and several strategies and tips in order to get started, maintain, and build a network. This book is very concise with easy points to implement immediately with several personal anecdotes to bring a very personal approach to her book.

After having read Networking On Purpose, I definitely feel more knowledgable and actionable as a networker and know that I will continuously look to Beth's book as a resource for ideas and information in networking. Definitely recommend purchasing a copy, reading, and then re-reading her book.

Cynthia A. Collier
5.0 out of 5 stars This author really knows everything about successful marketing...
28 October 2018 - Published on Amazon.com
Verified Purchase
This is a helpful guide by an extremely talented networking professional. The author, Beth Bridges, walked this walk for many years. She writes from a wealth of experience and knowledge with proven success. I recommend it for any business owner, salesperson, etc to avoid common mistakes when seeking new business as well as establishing new business “relationships”, and to those who have been in the game for a long time but need to improve or revamp their networking success. It is THE book for insight and help (armor) while entering, the sometimes scary and intimidating, networking arena.
Read more

Amazon Customer
5.0 out of 5 stars Improved my Networking success!
31 March 2018 - Published on Amazon.com
Verified Purchase
As a business owner, I learned that Networking is key to success. But MORE important is Networking CORRECTLY.
Networking On Purpose will help you avoid the pitfalls that most people make their first few years. This book will help you be remembered positively, among all those "sales people" that annoy you at Networking events.
Beth's experience and tips make this book worth 10 X's the price. I bought several and loan them out to people. They always return it with a BIG Thank You!

Everett O'Keefe
5.0 out of 5 stars This gal knows her stuff, and it shows!
19 October 2013 - Published on Amazon.com
Verified Purchase
Ms. Bridges is literally a professional networker, and she has trained people on networking for years. Finally, she has put some of her wisdom and experience into writing for the rest of us! Her depth of knowledge is apparent, and her nuggets are priceless!

Can't wait to put all this into action!


Read more
7 people found this helpful
Go to Amazon.com to see all 19 reviews 5.0 out of 5 stars
Get FREE delivery with Amazon Prime
Prime members enjoy FREE Delivery and exclusive access to movies, TV shows, music, Kindle e-books, Twitch Prime, and more.
> Get Started
Back to top
Get to Know Us
Make Money with Us
Let Us Help You
And don't forget:
© 1996-2020, Amazon.com, Inc. or its affiliates