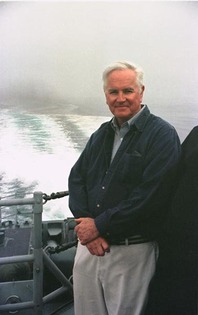 Page 1 of 1 Start overPage 1 of 1
Previous page
Next page
Start reading The Neptune Strategy (The Todd Ingram Series Book 4) on your Kindle in under a minute.

"An undeniably seaworthy tale for military-action buffs...fortunately, Ingram has much of WWII yet to serve." --Booklist

"A test of wills as well as of physical strength and endurance...robust, colorful prose...the story covers an impressive territory...a solid addition to Gobbell's developing war chronicles, as much historical fiction as military adventure." --Publishers Weekly

JOHN J. GOBBELL is a former Navy Lieutenant who saw duty as a destroyer weapons officer. His ship served in the South China Sea, granting him membership in the exclusive Tonkin Gulf Yacht Club. As an executive recruiter, his clients included military/commercial aerospace companies giving him insight into character development under a historical thriller format. The Last Lieutenant is the first of six stand-alone novels in the Todd Ingram series. The most recent is: Dead Man Launch, A novel of the Cold War. Altogether, John has written eight novels involving U.S. Navy action and is currently at work on his ninth, At Danger's Ebb. He and his wife Janine live in Newport Beach, California. He can be reached at john@johnjgobbell.com.

4.5 out of 5 stars
4.5 out of 5
524 global ratings
How are ratings calculated?
To calculate the overall star rating and percentage breakdown by star, we don’t use a simple average. Instead, our system considers things like how recent a review is and if the reviewer bought the item on Amazon. It also analyses reviews to verify trustworthiness.

Preston Holtry
5.0 out of 5 stars Action Packed!
Reviewed in the United States on 1 August 2020
Verified Purchase
Book 4 does not disappoint! The author skillfully and convincingly weaves the complexities of a layered plot in addition to the emotional highs and lows of the main characters. Characters introduced in the first book continue to evolve and captivate the reader’s attention; you get to know them and care how they cope with the stress of wartime and separation. Goebbell has done his homework on the Pacific War and the result is a highly entertaining novel. I’m looking forward to Book 5 in the Todd Ingram series. Preston Holtry, author of the Arrius Trilogy
Read more
One person found this helpful
Report abuse

Peter S
1.0 out of 5 stars He’s a righter not, a speler
Reviewed in the United States on 24 January 2021
Verified Purchase
I stopped 5% of the way in - I just couldn’t take any more bad grammar, incorrect spelling, poor punctuation or that confusing, recurring randomly inserted “BA”. I like the premise, but will wait until someone performs basic editing on this rough draft.
Read more
2 people found this helpful
Report abuse

Karl
3.0 out of 5 stars Hopping characters
Reviewed in the United States on 23 August 2020
Verified Purchase
The author likes to hop his characters from one scene to another without any transition. Todd Ingram is in the water after falling off a diving Japanese sub and a R A F airplane throws him a raft. Why, could they tell he was white? The next thing we hear is a phone call to his wife. How long was he in the raft? Same problem with Boom Boom!
Read more
One person found this helpful
Report abuse

Isabel Teasdale
5.0 out of 5 stars SOMETHING A FAMILY WOULD BE INTERESTED IN
Reviewed in the United States on 9 November 2020
Verified Purchase
CHRISTMAS GIFT
Read more
2 people found this helpful
Report abuse
See all reviews
Back to top
Get to Know Us
Make Money with Us
Let Us Help You
And don't forget:
© 1996-2021, Amazon.com, Inc. or its affiliates