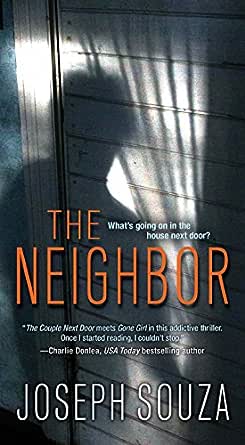 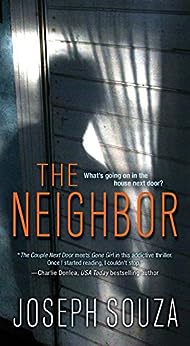 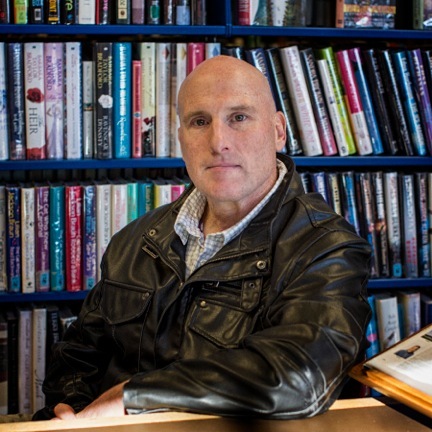 Advance Praise for The Neighbor "The Neighbor is like watching a chain-reaction car wreck happening in slow motion. Scary and disturbing with dark psychological twists and turns, it horrifies while it fascinates.
I couldn't turn away!"
--Lisa Jackson, # 1 New York Times bestselling author

"With its not-so-reliable narrators, brilliant writing and unexpected plot twists, Joseph Souza's The Neighbor might remind you of Gone Girl or The Girl on the Train, but this deliciously sinister thriller is a total original. You'll get hooked early on to this addictive page-turner and find yourself reading The Neighbor with the doors double locked and the shades drawn."
--Kevin O'Brien, New York Times bestselling author "With pitch-perfect characters, Joseph Souza peels back the good manners, the good educations, and the good work ethics of suburbia in twisted, fascinating revelations of the darkness that dwells within each of us that, untended, will seethe until it explodes. Unforgettable."
--Gayle Lynds, New York Times bestselling author of The Assassins "A gloriously creepy setting--ghost town suburbia--where seemingly respectable neighbors hide dirty secrets. You're never quite sure who to believe in this dark, twisted tale."
--Michelle Frances, author of the international bestseller, The Girlfriend "His unreliable narrators weave such a dark, disturbing tale. As the tension builds, twist after twist makes this impossible to put down."
--Debbie Howells, author of Her Sister's Lie

"Each secret seems to lead to another." --The New York Post Featured in "Required Reading" roundup Sunday April 29, 2018 "The plot is very winding and intriguing, and you will most assuredly hope you never have neighbors like these. Almost every chapter lurches you forward in a twisting sometimes downright scary story." --The Bangor Daily News

"A subtle powder keg packed into the pages of a domestic thriller." --Bookreporter "Souza brings us a modern-day novel of psychological suspense that will hook readers in from the start. Souza's stellar storytelling and authentically drawn characters come alive on the page and make for a riveting read. Leah is a compelling, complex character with her shrewdness, inquisitiveness, and slight neurosis. Souza expertly blends her strengths and faults together in a seamless way that makes her a rich, interesting character whom readers will be drawn to. A twisted, chilling ending is the icing on the cake for this thriller that will have readers turning pages until the very end." --RT Book Reviews, 4 Stars

Before launching his writing career, Joseph Souza worked as an intelligence analyst for the Drug Enforcement Agency in Washington, D.C. His award-winning short fiction and essays have been published in literary journals throughout the country. He lives in Portland, Maine, with his wife and two children.

Neva Navarre is an American narrator with a half-French name and full-French sensibilities. She is a firm believer in stories that validate women as sexual beings equal to men but who operate in the mammalian brain, even while in the throes of romance.

Will Damron is an Audie Award-nominated narrator who has recorded books in every genre, from science fiction and fantasy to romance, YA, and nonfiction. Raised in rural southern Virginia, he has appeared Off-Broadway and on stage and screen throughout the country. He lives in Los Angeles, California. --This text refers to an out of print or unavailable edition of this title.

In a taut psychological thriller filled with breathtaking twists, Joseph Souza explores the tangle of betrayal and deception between two neighboring couples, and asks how well we can really know others-or ourselves. --This text refers to the hardcover edition.
Read more

3.5 out of 5 stars
3.5 out of 5
64 global ratings
How are ratings calculated?
To calculate the overall star rating and percentage breakdown by star, we don’t use a simple average. Instead, our system considers things like how recent a review is and if the reviewer bought the item on Amazon. It also analyses reviews to verify trustworthiness.

Jennifer
TOP 10 REVIEWER
4.0 out of 5 stars ‘It feels strange being one of only two families living in this abandoned development.’
Reviewed in Australia on 26 April 2018
Leah and Clay Daniels, with their twins Zack and Zadie, move from Seattle to Maine. The move is to enable Clay to follow his dream of establishing a craft beer brewery. But the neighbourhood is not what Leah expected: the housing development is almost abandoned. Their only neighbours, Clarissa and Russell Gaines seem aloof. Clay works long hours, and Leah is bored:

‘I need to find something more meaningful in my life besides being a wife and mother.’

So Leah starts watching Russell and Clarissa. She both envies and admires their home and their university careers. But watching quickly turns to obsession, with Leah sneaking into their home. In the meantime, a local college girl has gone missing…

The first part of the story unfolds over two weeks in October, with the final part unfolding over ten days the following August. Both Clay and Leah are the story’s unreliable narrators: both have secrets, each seems able to justify quite outrageous self-centred behaviour.

‘Every story has another side.’

But the truth is that while I enjoyed some aspects of this story, the characters were so shallow, so self-absorbed that I really didn’t much care what happened to them. I felt sorry for the children and the dog, but the adults were either deluded or manipulative (and sometimes both). As the story progresses, more questions emerge, but some of the twists (no spoilers here) had me rolling my eyes in disbelief. I couldn’t stop reading because I had to know how it would end. And the ending? Hmm. I think I’d have enjoyed the novel more if I’d liked one of the main characters better, had more interest in why some of the characters acted the way they did, or found some of the actions more believable.

Note: My thanks to Joseph Souza, NetGalley and Kensington Books for providing me with a free electronic copy of this book for review purposes.

Gwendy P.
3.0 out of 5 stars Long winded
Reviewed in Canada on 18 August 2018
Verified Purchase
Reading this book was like being stuck at a party listening to a long-winded tale spouted off by a drunk person: it was meandering and kept going "off point". I didn't really know what this was "about"; the racial issues were too shallow to give them justice and in order to finish the story I adjusted my mindset to view it as a satire of political correctness and life in suburbia. I love a good villain but the people in this story, every one of them, were so vile that I didn't care about the outcome. I would have preferred if the story had ended a few pages earlier than it did, and overall felt it should have been much shorter. Liked the starling reference.
Read more
Report abuse

Amazon Customer
1.0 out of 5 stars Poor effort
Reviewed in Canada on 8 May 2019
Verified Purchase
One of the worst books I have read this year....the author seemed to want to get all the "catch phrases" of this decade into the plot and the characters' psyche. He failed miserably to make any of it believable. The only reason I finished it was because I wondered how on earth he would get himself out of the "fix" he created....and even that was disappointing.
Read more
Report abuse

zoda
1.0 out of 5 stars boring
Reviewed in Canada on 6 August 2018
Verified Purchase
Why do authors insitson pushing their political views ..they alienate half their readers. I don't care what yo thought of Pred Bush. ANd PLEASE stop comparing every book to Gone Girl!!!
Read more
Report abuse

Sheila Hurteau
2.0 out of 5 stars Revew of Joseph Souza's The Neighbor
Reviewed in the United States on 18 May 2018
Verified Purchase
I didn't care for it, poorly written, errors like calling Bill Clinton first black President, victim's hair described as tawny, few chapters later it's black, story neighbor only buys poor nutrition and junk food, a few chapters later her fridge is loaded with nice meats and cheeses and expensive food, Had a good idea but it petered out quickly, too far fetched.
Read more
21 people found this helpful
Report abuse

John Greco
5.0 out of 5 stars If you are like the two narrators in this fast-moving psychological suspense thriller
Reviewed in the United States on 10 May 2018
Verified Purchase
As a state, Maine, one of my favorites to visit, has one of the lowest crime rates in the country, yet it is flourishing with writers in the mystery/suspense/crime genre. I am not sure why that is, but author Joseph Souza is one of those authors, and his new thriller may just keep you up way past your bedtime.

Souza never lets up the pressure leaving you, really forcing you to turn page after page wondering what happens next? What perverse secrets will be revealed? It's a dark and winding road filled with characters who all have a box full of secrets and lies they are keeping to themselves.

The dual narrators are husband and wife Clay and Leah Daniels, recent transplants to Maine from Seattle. Their neighbors are Clarissa and Russell Gaines, a black couple. Clay has kick-started his dream job of opening up a craft beer brewery. Leah, a stay at home Mom, is hoping for a friendly neighborhood with friends for both of their two kids and herself. Neighbors Clarissa and Russell Gaines have careers at the local university. They are also not very neighborly. Leah finds herself left alone in a deserted, still undeveloped neighborhood. Lonely, Leah starts doing things that good neighbors don't do. Clay does things a good husband shouldn't do. In the process, secrets best left hidden for all begin to unravel.

Reading The Neighbor is a like riding a twisty out of control roller coaster that you will not want to get off as you watch everyone's lives crumble and their dark and haunted pasts all come colliding together.
Read more
7 people found this helpful
Report abuse
See all reviews
Back to top
Get to Know Us
Make Money with Us
Let Us Help You
And don't forget:
© 1996-2021, Amazon.com, Inc. or its affiliates