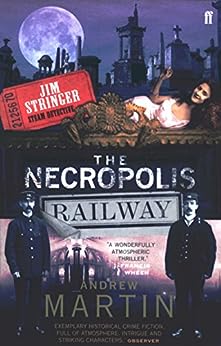 A murder mystery, rich in atmosphere and period detail, set in 1903 and centred around Waterloo Station and the real-life peculiarity that was the Brookwood Necropolis Railway. This is Andrew Martin's best novel yet. --This text refers to an alternate kindle_edition edition.

"Martin s debut, loaded with railway lore, pairs a lively, often macabre look at turn-of-the-century London with a bang-up mystery." Kirkus Reviews (starred review)
"A classy potboiler . . . in the best formal traditions of Dickens and Collins (let alone Christie and Chandler)." The Times (London)
When railway man Jim Stringer moves to the garish and tawdry London of 1903, he finds his duties are confined to a mysterious graveyard line. Perplexingly, the men he works alongside have formed an instant loathing for him, and his predecessor has disappeared under suspicious circumstances. Forced to live by his wits and assisted by his alluring landlady, he struggles to unearth the truth before he is issued a one-way ticket on the Necropolis Railway.
"An ingenious and atmospheric thriller . . . crackles with the idiom and slang of the period. An eccentric delight."--Daily Express (London)
"So diverting that reader and hero are swept off their feet into a noisy, steamy, antiquated world of great danger." The Guardian (Book of the Week)
ANDREW MARTIN was a Spectator (London) Young Writer of the Year. He lives in London.
" --This text refers to an alternate kindle_edition edition.

Andrew Martin, a former Spectator Young Writer of the Year, grew up in Yorkshire. After qualifying as a barrister he became a freelance journalist in which capacity he has tended to write about the north, class, trains, seaside towns and eccentric individuals rather than the doings of the famous, although he did once loop the loop in a biplane with Gary Numan. He has also learned to drive steam locomotives, albeit under very close supervision. He has written for the Guardian, the Daily Telegraph, the Independent on Sunday and Granta, among many other publications, and his weekly column appears in the New Statesman. His highly acclaimed first novel, Bilton, described by Jon Ronson as 'enormously funny, genuinely moving and even a little scary', was followed by The Bobby Dazzlers, which Tim Lott hailed as 'truly unusual - a comic novel that actually makes you laugh'. In praise of his most recent novel, The Necropolis Railwa --This text refers to an alternate kindle_edition edition.
Read more

3.7 out of 5 stars
3.7 out of 5
113 global ratings
How are ratings calculated?
To calculate the overall star rating and percentage breakdown by star, we don’t use a simple average. Instead, our system considers things like how recent a review is and if the reviewer bought the item on Amazon. It also analyses reviews to verify trustworthiness.

Carol Ann Bone
1.0 out of 5 stars Don't Bother!
Reviewed in Australia on 17 April 2017
Verified Purchase
' The cat sat on the mat' style of writing with the only story interest the background of Edwardian steam railways
Read more
Helpful
Report abuse

Lancashire Lad
TOP 500 REVIEWER
4.0 out of 5 stars good read
Reviewed in Australia on 19 October 2016
Verified Purchase
Until I read this book I didn't even know the railway existed.
Read more
Helpful
Report abuse
See all reviews

Mrs. Gwen Nelson
5.0 out of 5 stars A brilliant series of novels
Reviewed in the United Kingdom on 28 December 2019
Verified Purchase
I originally picked up a couple of Andrew Martin's "Jim Stringer" novels in a charity shop and was absolutely hooked. So much so that I bought all the others, including this which is the first in the series, and have read the whole series in one extended session. I can't wait for the next one to be published. His writing is original and unrepetitive. What I particularly like is that, although they are in chronological order, there are several years between incidents which makes them more credible than if it was a mystery every week. There is also an interesting back story, again with gaps in the narrative which allows you to draw your own conclusions. Although part of me would like this filled in to some extent.
Read more
2 people found this helpful
Report abuse

Norling
4.0 out of 5 stars Worth the read eventually
Reviewed in the United Kingdom on 9 February 2021
Verified Purchase
It took me a while to get used to the railway technical terms and the writing style, but I had a light bulb moment after reading a third of the book. I am now hooked and on the 3rd book in the series
The next 2 books are clearer on delineating the different characters; I was somewhat confused initially as the Board members and also occasionally by those at the works My advice is to persevere and you will be rewarded.

Paul Mason
3.0 out of 5 stars Fun but you really need to be a Steam Train Buff
Reviewed in the United Kingdom on 19 October 2013
Verified Purchase
The Necropolis Railway was a book I bought in a second hand bookshop on a whim*. It’s a murder mystery set on the turn of the 20th century steam railways. Specifically it concerns the Necropolis Railway of the title. This was a real thing which was set up during the mid-19th century as a way of dealing with the overcrowding in central London cemeteries by moving funerals and burials to a large graveyard outside London. The transport to do this was the Necropolis Railway.

This book is set in the winter of 1903 when Jim Stringer, a humble porter from Yorkshire moves to London having accepted the offer of a job as an engine cleaner working for the London Necropolis Company. This he hopes is the start of a career path leading to becoming a driver, that being the pinnacle of achievement in his view. However almost from the start he comes up against hostility from the other men working on the railway. He also discovers that there have been a number of mysterious apparently accidental deaths. Further intrigue, and deaths follow and he finds himself investigating what he’s now sure is a series of murders.

The thing I should say straight away is that I’m not particularly a steam train fan. Martin clearly is and that’s OK. One of the delights of reading is to put yourself in the head of someone who thinks differently to you, likes things you don’t etc. However I had thought that I’d learn something as I went along but Martin pretty much assumes you know an awful lot of the technology, as well as some of the period details. My policy these days with books is to plough on and assume it will all become clear. This is a book where I might have benefited from pausing to check Wikipedia every now and then. Or perhaps not, I got the gist.

I can’t comment on the accuracy of the period feel but I can say that it was recognisably different from the modern day. So that awful thing of 21st century people projected back into historical contexts that you sometimes see wasn’t a problem here.

The plot trundles along quite well. I found it a little slow to start but it picks up about a third of the way in. The romantic interest when it turned up was well done I thought. Again, different to modern eyes but not a cliche either. The murder mystery plot was pretty good though I guessed most of the reason behind the killings. There did seem to be a lot of explanation in the last couple of pages which left it feeling like the next book (there’s a series of these) might continue the story, but from what I gather despite having the same hero it’s its own story.

(*I later bought a new copy for my dad which is why it turns up on my Amazon purchases list.)

Elizabeth Von Beck
3.0 out of 5 stars Don't judge a book by it's potential...
Reviewed in the United Kingdom on 1 November 2019
Verified Purchase
I was hoping for a bit more; it's simple narrative and plotting and kind of comes over a bit more like a spooky kids book whereas I was expecting some big, luch Gothic Victorian ghost story. Still fun though...
Read more
Report abuse

Diana at The Saker
4.0 out of 5 stars Unusual and intriguing
Reviewed in the United Kingdom on 19 March 2014
Verified Purchase
I bought this book as I have some contacts with Brookwood Cemetary and I am fascinated by it's history. If I hadn't known that this was published in 2002, I would have been positive that the author was writing in Victorian times, so well does he evoke the atmosphere of London in the days of gaslights and thick fogs. I found it a bit slow going at first, but was soon drawn into the mystery and thoroughly enjoyed it - shall be downloading the second in the series as I want to know how Andrew Martin develops his principal characters.
Read more
2 people found this helpful
Report abuse
See all reviews
Back to top
Get to Know Us
Make Money with Us
Let Us Help You
And don't forget:
© 1996-2021, Amazon.com, Inc. or its affiliates