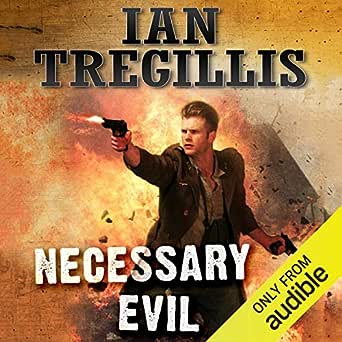 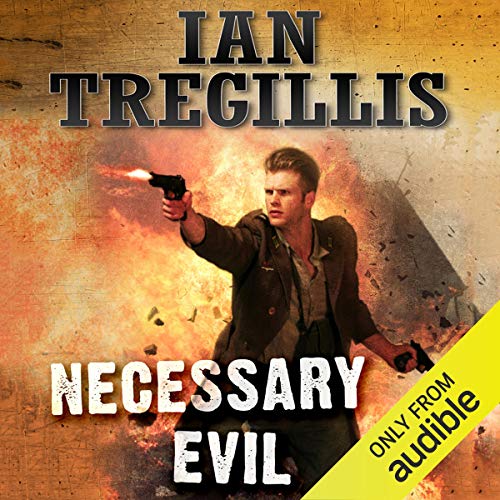 Ginny
4.0 out of 5 stars Bittersweet Ending to a Good Series
Reviewed in the United Kingdom on 21 June 2013
Verified Purchase
See my review of this book, and many more, at TalesfromtheGreatEastRoad.wordpress.com

(Spoilers for the first two books in the series.)

To be given the chance to undo the mistakes of his past, to not only change the fate of his family but also save the world, Raybould Marsh has agreed to trust his most despised enemy. Gretel is one of the few living genetic experiments created by the mad Dr Von Westarp, who were used as soldiers during the Second World War. She can see the future, and has used her powers to kill Marsh's infant daughter once already. But the only wait to save his baby, and everyone else, is to trust Gretel. As the Eidolons - a race of god-like beings who abhor humans - destroy the world Gretel is able to send Marsh back in time from 1963 to 1940 in order to save this time line from destruction and redeem himself.

Necessary Evil is a very bittersweet book. After seeing Marsh become a shadow of the man he used to be in the last book, The Coldest War, he is given a chance to change history - but for a different version of himself. He gets to see his wife, when she still loved him, and his baby daughter, who has been dead for nearly twenty years, but can't reveal who he truly is. Marsh's pain and loneliness is visible throughout the novel, and heart-wrenching to read.

The comparisons between Old Marsh and Young Marsh is interesting to read. Both are obviously stubborn and determined to protect their family, but Old Marsh has become better at scheming and manipulating people: more willing to do the "necessary evil" in order to reach his goals. His loneliness has hardened him, and the possibility of saving his child has made him desperate. Yet, despite these faults, Old Marsh is a constantly sympathetic character.

The few insights we get into Gretel's mind are fascinating, in a very disturbing way. She has been described as "evil" constantly throughout the series, and these chapters certainly show she is unstable and obsessive, willing to kill anyone who gets in her way. No-one is safe, and a few key characters are killed in a fairly gruesome way.

Ultimately, this is a satisfying and emotional ending to a great series.

M. King
4.0 out of 5 stars A satisfying ending
Reviewed in the United Kingdom on 20 March 2017
Verified Purchase
The last book actually coasts along and is a neat resolution to what's gone before and ultimately satisfying.

There are some bits that jibe, such as Gretel's confidence in a timeline she can't see, but all in all it's a good tale.

I can't help thinking that 3 books was pushing it and the tale would have worked better in 2 but at least things picked up in the end.
Read more
Report abuse

Amazon Customer
5.0 out of 5 stars Superb resolution to the triptych
Reviewed in the United Kingdom on 11 May 2013
Verified Purchase
Handily, the 1st several chapters bring you up to date (revise?) without slowing down the plot. The descriptions and sense of menace from the eidolons make this the most satisfying and frightening of the 3 books. A really satisfying conclusion. The whole thing hangs together so well - definitely all planned out rather than just a sequence of 3 books. Remarkable.
Read more
One person found this helpful
Report abuse

C Denham
5.0 out of 5 stars Excellent end to the series
Reviewed in the United Kingdom on 12 April 2014
Verified Purchase
The third book in the series has a sudden switch of narration at the start, but stick with it - it was a little uncomfortable for me when I opened it, but it really works once you get a chapter or so in.

This is a brilliant end to the series and it really shows the work the author has put into planning the story to avoid horrible plot holes and the usual pitfalls.
Read more
Report abuse

The Pantsman
5.0 out of 5 stars Five Stars
Reviewed in the United Kingdom on 14 July 2018
Verified Purchase
Good reads
Read more
Report abuse
See all reviews
Get FREE delivery with Amazon Prime
Prime members enjoy FREE Delivery and exclusive access to movies, TV shows, music, Kindle e-books, Twitch Prime, and more.
> Get Started
Back to top
Get to Know Us
Make Money with Us
Let Us Help You
And don't forget:
© 1996-2020, Amazon.com, Inc. or its affiliates