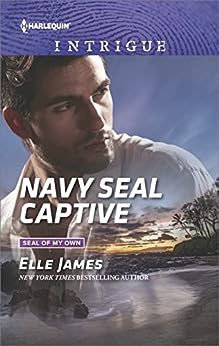 Navy SEAL Captive (SEAL of My Own Book 2) Kindle Edition

Raised an Air Force brat, Elle James got her work ethic from her dad, creativity from mom and inspiration from her sister. As a member of the reserves, she's traveled, managed a career, and raised three children. She and her husband even raised ostriches and emus. Ask her what it's like to go toe-to-toe with a 350-pound bird! Former manager of computer programmers, Elle is happy to write full time in NW Arkansas.

Kryssie Fortune
5.0 out of 5 stars Great holiday reading
Reviewed in the United Kingdom on 26 June 2016
Verified Purchase
Jenna and Sawyer's tale pulled me in from the start. There were surprise, great action, and an even greater romance. This is one book I enjoyed so much, I didn't want it to finish
Read more
Report abuse

Kindle Customer
5.0 out of 5 stars Navy seal captive
Reviewed in the United Kingdom on 17 April 2016
Verified Purchase
I am enjoying reading this series about the seal of my own. I can't wait for the next book to come out so I can read it to. I would recommend it to anyone who likes to read about the seals .
Read more
Report abuse

Kindle Customer
4.0 out of 5 stars Enjoyable read but...
Reviewed in the United States on 26 August 2019
Verified Purchase
I really enjoy the second installment in this series. It was interesting to see how the team developed with the introduction of the new intrigue into their vacation. The characters were very likeable and very well developed. Couple of problems that I had with a story are minor but I probably won't continue with the series mainly because of the increase and cost of the two remaining books which seems excessive since the other two were so reasonably priced and also based on the reviews that mention the team is not really the focus in the two remaining books. I thought that's what made these very strong stories.
Read more
One person found this helpful
Report abuse

Amazon Customer
4.0 out of 5 stars A good second book to the series
Reviewed in the United States on 19 May 2017
Verified Purchase
Jenna is a jilted bride, left at the alter two months ago when her groom decides to run off with her maid of honor/former best friend. Unable to get a refund on her honeymoon, she and another friend go to Cancun for a vacation.

Sawyer Houston is one of the 4 Navy SEALs in this series on vacation in Cancun. He's just finished up an unauthorized op from the first book and wanting to get some R&R in Cancun when he's talked into going zip-lining with his SEAL brother Quentin. Jenna is convinced she's boring, thanks to her former fiancé. Also talked into zip-lining, this is where they originally meet but don't connect.

Jenna mistakenly gets a suitcase that isn't hers. Inside she finds a sniper rifle and photos indicating the man she bumped into on the zip-lining excursion is targeted. She decides she needs to warn him and once she finds him, their adventure finally begins.

Throughout their adventure, Jenna constantly references how boring she is. Sawyer tried to convince her otherwise as they continuously dodge the attempts on his life.

Sawyer is a lovable hero. They both have issues and baggage, but get past it. With the help of Natalie, an SOS agent from the first book, their is excitement at the end of the book. Yet, who hired whom to kill him remains a mystery that I'm sure will carry onto the next book in the series.

I've read the previous SOS series, and it's pretty obvious these SEALs will become agents within that once this series ends.
Read more
Report abuse
See all reviews
Back to top
Get to Know Us
Make Money with Us
Let Us Help You
And don't forget:
© 1996-2021, Amazon.com, Inc. or its affiliates