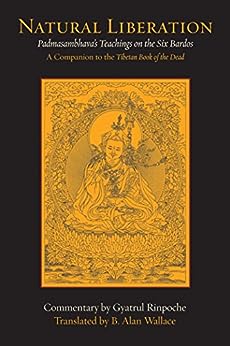 "This teaching of Padmasambhava, the founder of Buddhism in Tibet, is finally here for English readers as the heart of this book. This teaching illuminates the most profound questions about who we are and provides a map for the journey through life, death, and rebirth in great depth and simplicity."----Tulku Thondup Rinpoche, author of The Hidden Teachings of Tibet and The Healing Power of Mind --This text refers to an alternate kindle_edition edition.

Venerable Gyatrul Rinpoche was born in 1924 in China near the Tibetan border. At the age of seven he was recognized to be a reincarnate tulku and trained at Payul Dhomang Monastery in eastern Tibet. Rinpoche spent many years in solitary retreat before fleeing the Communist invasion of Tibet in 1959. After living in India for twelve years, Rinpoche moved to America and in 1976 was appointed as H.H. Dudjom Rinpoche's spiritual representative in America. Rinpoche has founded many Buddhist centers, including Tashi Choling in Oregon, Orgyen Dorje Den in the San Francisco Bay area, Norbu Ling in Texas, Namdroling in Montana, and a center in Ensenada, Mexico. B. Alan Wallace is president of the Santa Barbara Institute for Consciousness Studies. He trained for many years as a monk in Buddhist monasteries in India and Switzerland. He has taught Buddhist theory and practice in Europe and America since 1976 and has served as interpreter for numerous Tibetan scholars and contemplatives, including H. H. the Dalai Lama. After graduating summa cum laude from Amherst College, where he studied physics and the philosophy of science, he earned his MA and PhD in religious studies at Stanford University. He has edited, translated, authored, and contributed to more than thirty books on Tibetan Buddhism, medicine, language, and culture, and the interface between science and religion. --This text refers to an alternate kindle_edition edition.

4.6 out of 5 stars
4.6 out of 5
53 global ratings
How are ratings calculated?
To calculate the overall star rating and percentage breakdown by star, we don’t use a simple average. Instead, our system considers things like how recent a review is and if the reviewer bought the item on Amazon. It also analyses reviews to verify trustworthiness.

Stu
3.0 out of 5 stars taking it back to basics
Reviewed in the United Kingdom on 29 September 2014
Verified Purchase
I can see here that most Buddhists have given this book 5 stars, however myself i found it lacking in some areas of in depth explanation from the Vajrayana and Rzogschen perspective, in the fact that these lecture given by Gyatrul Rinpoche were in front a Buddhist and non Buddhist audience, so the explanations of the bardos and practices are mainly in the language of sutra so that the non Buddhist audience can understand his explanations better.
All of the other Books relating to Guru Rinpoche's terma teachings take it for granted that the reader has an understanding or experience of "Emptiness " teachings, so don't offer explanation..you just get right on and read them and either are able to relate to the teachings or not.
when i bought this book i was looking for a straight Scotch.."as it is" undiluted teachings.
on that score for me this book misses out, and i will be looking for another book on the six bardos without the (in my opinion) unnecessary commentary

However this teaching is very important for all of humanity, so i do hope that it is of use to "sentient Beings" it just isnt what i was looking for
Read more
One person found this helpful
Report abuse

Book Geek
5.0 out of 5 stars A Gem of a Practice Guide.
Reviewed in Canada on 1 August 2014
Verified Purchase
A to-do book, akin to a home repair book. This is the second copy I have bought. A rare gem, even in the world of the Buddhist revival and scholarship of the last 12 years. It accurately presents the hue into which one is to grow, not as an identity, but as a presence due to practice. If you are interested in attempting to make Buddhism grow in your life, I can think of no better 'thorough' book.
Read more
One person found this helpful
Report abuse

M
5.0 out of 5 stars A great book
Reviewed in Canada on 25 October 2019
Verified Purchase
A great and necessary book.
Read more
Report abuse

Marie Delise
4.0 out of 5 stars we are nothing,we are everything
Reviewed in Canada on 9 March 2019
Verified Purchase
up and down,interesting then not so interesting.
Read more
Report abuse
See all reviews
Back to top
Get to Know Us
Make Money with Us
Let Us Help You
And don't forget:
© 1996-2021, Amazon.com, Inc. or its affiliates