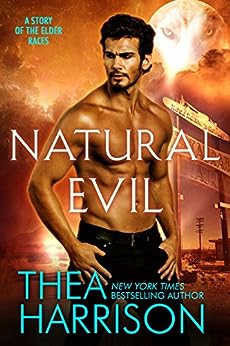 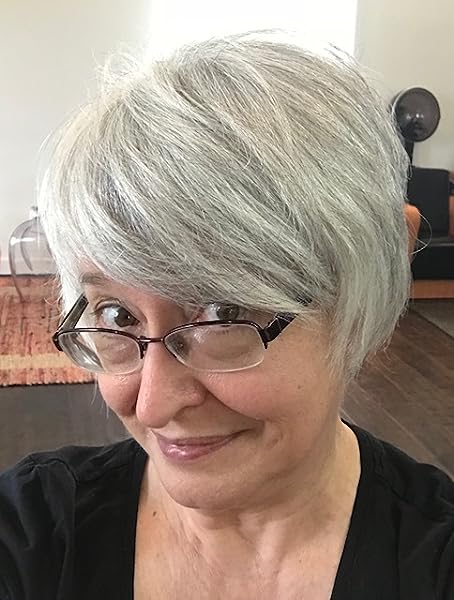 Natural Evil: A Novella of the Elder Races Kindle Edition

Book Gannet
5.0 out of 5 stars Desert Dogs
Reviewed in the United Kingdom on 28 March 2012
Verified Purchase
Claudia wasn't heading anywhere in particular when she saw the lump at the side of the road. Unable to leave the brutally wounded dog to die, however, she soon finds herself in the middle of a dark and dangerous mystery.

Because the dog is actually Wyr, which raises the crime from animal abuse to attempted murder. Good thing Claudia's ex-special forces and angry enough to cope.

For fans of Harrison's Elder Races series ( Dragon Bound , etc) this is a clever novella revealing a little more of this fascinating world. Claudia is a strong, smart human woman with a tiny touch of telekinesis, and a worthy match and partner for Luis, the battered Wyr, who's never met anyone like her before.

The mystery/crime plot is steadily unwound, if a little swiftly concluded, while the romance is nicely understated until they're ready to make their move. I'd love to know more about these two, especially how Luis convinces Claudia to let him hang around. However, like the previous novella -  True Colors  - this story is loosely based around the seven Elder Gods as found in the Primal Tarot deck Claudia's been given. It's a clever idea, if a little restricting, and neatly sets up the next novella.

Leaving me wanting just a little (or a lot, if I'm lucky) more, and hoping these two might show up in future books, this is a good read to help while away the time until the next book ( Lord's Fall ). For existing fans and newcomers, this is an interesting sample of what else this world has to offer. I look forward to reading more soon.
Read more
5 people found this helpful
Report abuse

DebB
5.0 out of 5 stars A love story told with warmth and humour - and a bit of sex!
Reviewed in the United Kingdom on 20 May 2014
Verified Purchase
This is a novella - not a book as some other reviewers say - so it's shorter than a novel, and things have to get going and get resolved that bit faster. So don't get snippy that it isn't a full book.

This is good - Claudia, a weary retired-Special Forces major finds a "freakishly massive", badly injured dog at the road side. She manages to get it into her car and to a vet, but in the small town she ends up in, things aren't quite right, with some far too interested in the animal.
The relationship building between the distrustful, badly injured Wyr and the taciturn, tough woman is beautifully drawn, with humour and warmth. In a nice reversal of the norms in this genre, she's the tough cookie here, the one looking after him - not t'other way round. And when the chips are down, he's the one that has to go for help, leaving her in danger - which he really, really doesn't like! "The measure of an intelligent man, she thought, is when he allows reason to influence his actions, whether he wants it to or not."

Anyhow, there's a mystery to solve, baddies to rout, a relationship to develop, and the small problem of an age gap to overcome - in that he's mid-twenties and she's forty, and maybe just old enough to be his mother. There's the requisite sex scene - but at the right time in the story, and for good reasons - not just cor, fancy a bit of that! There's no instant mate-bonding, or lifelong declarations - just two people who know there's something good between them.
Well worth the pennies.
Read more
Report abuse

Kindle Customer
5.0 out of 5 stars As always Excellent
Reviewed in the United Kingdom on 26 September 2016
Verified Purchase
This was another excellent read, the Elder Races novels are always wonderful, this was a literal surprising but I loved every page, met a couple of new characters who I loved. The story wandered beautifully to a great end. Can't wait for the new Elder Races book in December.
Read more
Report abuse

Read too much
3.0 out of 5 stars Fizzled out after strong start
Reviewed in the United Kingdom on 11 December 2017
Verified Purchase
Disappointed after a promising start.
It might only be a novella but I expected more character chemistry, plot and interest from this author.
Read more
One person found this helpful
Report abuse

F. Lawless
5.0 out of 5 stars Another great addition to this series
Reviewed in the United Kingdom on 7 April 2012
Verified Purchase
I loved this book, which is a Novella from the Elder Races series. The female lead is strong, capable and mature with her own mind and the male lead is strong and protective while giving the lady credit for her own abilities. I loved this book and would recommend it and the rest of this excellent seried to anyone who loves paranormal romance.
Read more
2 people found this helpful
Report abuse
See all reviews
Back to top
Get to Know Us
Make Money with Us
Let Us Help You
And don't forget:
© 1996-2021, Amazon.com, Inc. or its affiliates