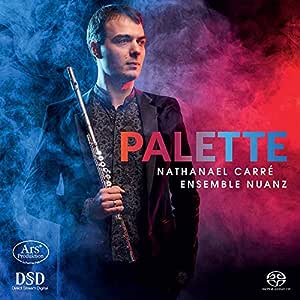 Theobald Böhm revolutionised the flute in the middle of the 19th century. He changed its form and mechanics and constructed it from metals, which gave the flute a more flexible sound and new tone colors while enabling a more brilliant technique. The new flute inspired many composers, particularly in France at the beginning of the era of Modernism, which brought with it a variety of new compositional styles. With this album, I first and foremost wanted to draw attention to the panoply of compositional styles and to demonstrate how profound and full of character this music is. I would like to transcend the limits of the original instrumentation for flute and piano with my own arrangements. I want to create an entirely new sound experience and, by using the expressive capabilities of string instruments, reveal the repertoires full potential of colors. As such, the album offers a rich palette of styles and colors. (Nathanael Carré)